"It's a holy cause to feed a hungry child."

Ilse, a childhood friend of mine, once found a raspberry in the concentration camp and carried it in her pocket all day to present to me that night on a leaf. Imagine a world in which your entire possession is one raspberry and you give it to your friend.

Gerda Klein has told this story and many others about her life to millions of people throughout the world. Klein was living a happy childhood in southern Poland when German soldiers invaded in September, 1939. In time she would lose her entire family except for one uncle. She was in the Czech town of Volary when a Jewish lieutenant named Kurt Klein helped liberate a group of survivors, including Gerda. The two would marry and begin a life together.

The Klein Foundation has established educational programs for middle and high school students. One of the programs teaches tolerance, acceptance, and hope. The other, entitled "KNOW Hunger," focuses on developing local community service programs to combat hunger.

Following the tragic shooting at Columbine High School May 7, 1999, the Kleins travelled to Littleton, Colorado to speak to students and teachers about tolerating difference and ending bigotry.

Kurt Klein died April 19, 2002 at the age of 81. He was on a lecture tour in Guatemala City, Guatemala, delivering his and Gerda's message of hope. Click here to read his obituary.

Gerda Klein was a featured guest speaker at a dinner held in Los Angeles in January, 2002 to raise awareness about ending Childhood Hunger in America. Gerda has received numerous honors including an Academy Award for her documentary about the Holocaust. The following excerpts were taken from the powerful message she shared at an event for Children Uniting Nations and Hunger Free America:

It has been my mission and my incredible joy to be speaking to kids all over the country and I’ve been asked this question in almost every community: 'How did it feel for you, a Holocaust survivor, to be standing on stage (at the Academy of Arts and Sciences) holding an (Academy Award winning) Oscar in your hand?'

I should tell you what I thought. I remember the long days on the death march, the bitter cold, the hunger, the loneliness, and the fear. I stood with a rusty bowl in my hands praying that when I got to the end of the line there should be enough food left in the kettle, and if by some miracle the ladle went deeper and brought forth a potato, I was a winner. I don’t want our children and grandchildren to live in a world where a potato is more valuable than an Oscar, but I don’t want them to be in a world where an Oscar is so important, forgive me, that one forgets that so many still don’t have a potato. This, my friends, is what it’s all about.

How blessed we are to be able to reach out to stamp out intolerance and hatred and feed the children, our future.

And I have been asked 'Why did you go on?' in those bitter days when I lost everyone I loved. My dream, I kept in my heart and pulled it out when the going was rough, was a picture: I could see my childhood home, my father smoking his pipe and reading the evening paper, my mother working at her needlepoint, my brother and I doing our homework, and I stood struck by the enormity of the thought that those were the evenings I took totally for granted. I called them boring evenings at home. To be a part of one such evening became the driving force for my own survival.

When you return to your homes, approach them slowly. Approach them as a hungry, nameless stranger would, and through the eyes of the stranger do not see what is missing but what is there.

The White House Blog - Announcing the 2010 Medal of Freedom Recipients
Lifesaver Hero Dr. J. Larry Brown's hero is Gerda Weissmann Klein - who has dedicated her life to fighting the problem of hunger. 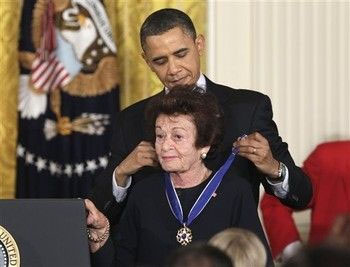 Gerda Klein is a recipient of the 2010 Medal of Freedom.  America's highest civilian honor, it is awarded to individuals who make an especially meritorious contribution to the security or national interests of the United States, world peace, cultural or other significant public or private endeavors. Here is what was said about her:

Gerda Weissmann Klein.  Gerda Weissmann Klein’s life is a testament to the tenacity of the human spirit.  A Holocaust survivor, she was separated from her parents and sent to a series of Nazi labor camps.  In 1945, she was one of a few survivors among those forced to undergo a 350-mile death march to avoid the progress of liberating Allied forces. From tragedy to triumph, she and her husband proudly started the Gerda and Kurt Klein Foundation to promote tolerance, respect and empowerment of students throughout the world. By sharing her stories and encouraging others to see themselves in one another, Gerda Klein has helped to advance understanding among all people. 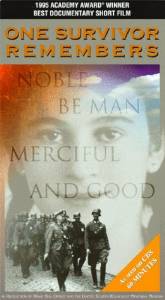 The Hours After
Gerda Weissmann Klein and Kurt Klein

Promise of A New Spring: The Holocaust and Renewal
Gerda Weissmann Klein

All But My Life
Gerda Weissman Klein