"I can't vote, so this is one of the ways I can make my voice heard." Greta Thunberg

One day in August 2018 Greta Thunberg skipped school -- to protest about climate change outside of Swedish Parliament. Eight months later she was nominated for a Nobel Peace Prize.

Greta is the daughter of one of Sweden's most famous opera singers; her father is an author and actor. Greta grew up bullied and was diagnosed years ago with Asperger's syndrome--a diagnosis on the autism spectrum, as well as selective mutism: “Selective mutism is a severe anxiety disorder where a person is unable to speak in certain social situations , such as with classmates at school or to relatives they don’t see very often … A child or adult with selective mutism doesn’t refuse or choose not to speak, they’re literally unable to speak.” People diagnosed with autism also are characterized by narrow interests and bluntness.

While it used to be that Greta's story would have been characterized as someone "overcoming" her disability, she believes she became the global climate activist she is because of her autism: 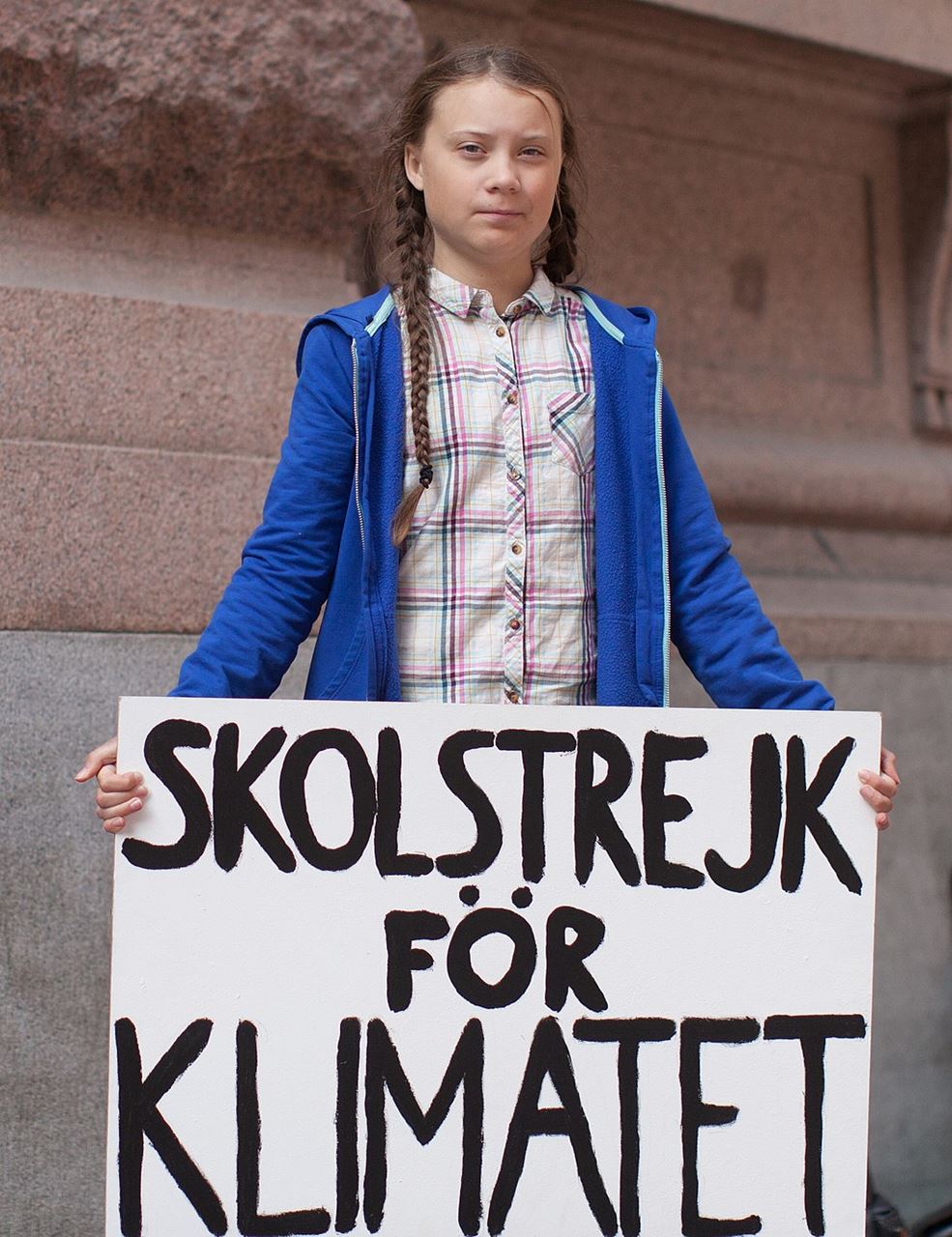 Greta Thunberg outside of Swedish Parliament. Her sign says "school strike for climate."Anders Hellberg [CC BY-SA 4.0 (https://creativecommons.org/licenses/by-sa/4.0)]“I see the world a bit different, from another perspective...It’s very common that people on the autism spectrum have a special interest. … I can do the same thing for hours.”

“I overthink. Some people can just let things go, but I can’t, especially if there’s something that worries me or makes me sad. I remember when I was younger, and in school, our teachers showed us films of plastic in the ocean, starving polar bears and so on. I cried through all the movies. My classmates were concerned when they watched the film, but when it stopped, they started thinking about other things. I couldn’t do that. Those pictures were stuck in my head.”

Greta became depressed and started to stay home. She felt relief being able to talk to her parents about her worries about climate change. They told her everything would be fine. But Greta was obsessed with reading articles about climate change, finding facts, and watching documentaries. Her parents discovered she had remarkable powers of persuasion, as they ran out of arguments: Greta ulimately convinced her mother to stop taking flights on planes, and her father to become a vegan.

Then, Greta went to Swedish Parliament. Inspired by the high school activists from the Marjory Stoneman Douglas High School from Parkland, Florida, she promised to protest every Friday until the Swedish elections. What did she want? For the politicians to abide by the Paris Climate Agreement and provide a safe pathway to holding the increase in the global average temperature to well below 2°C above pre-industrial levels." (The agreement also called to pursue "efforts to limit the temperature increase to 1.5°C.")

The first day she was alone with her hand painted sign, which  said School Strike for Climate.

“I painted the sign on a piece of wood and, for the flyers, wrote down some facts I thought everyone should know. And then I took my bike to the parliament and just sat there...The first day, I sat alone from about 8.30am to 3pm – the regular school day. And then on the second day, people started joining me."

Now, more than 70,000 students in over 270 towns and cities across the world have joined her protest each week with the hashtag #FridaysForFuture.

In December 2018, Greta gave a speech to the UN Climate Change COP24 Conference that went viral https://youtu.be/VFkQSGyeCWg. In January 2019, she gave a speech at the World Economic Forum in Davos in which she made statements with her characteristic bluntness: "On climate change, we have to acknowledge that we have failed." She also gave a TED Talk that garnered over 2.2 million views: "The climate crisis has already been solved. We already have all the facts and solutions," Thunberg says. "All we have to do is to wake up and change."

In March 2019, a previous depressed "loner," Greta was the inspiration for youth climate activists everywhere, and a movement called Youth Strike 4 Climate, a global student strike for the climate. On March 15, 2019, an estimated 1 million students held 2,000 protests in 125 countries, - one of the largest climate protests ever.

Greta was nominated for a Nobel Peace Prize by three Norwegian MPs:

"We have proposed Greta Thunberg because if we do nothing to halt climate change, it will be the cause of wars, conflict and refugees," Norwegian Socialist MP Freddy Andre Ovstegard told AFP news agency. "Greta Thunberg has launched a mass movement which I see as a major contribution to peace," he added.

If she wins, she will be the youngest person to win a Nobel Peace Prize since Malala Youfsazi.

Greta has also been receiving a lot of trolling on social media because of her monotone voice (due to aspbergers). She's also been accused of being "put up to her campaign by environmental groups or green-energy companies." But she says she is used to bullying and is not bothered by it because it shows what she is doing is making a difference: ""I expected when I started that if this is going to become big, then there will be a lot of hate."

Thun­berg is demanding that governments abide by the emissions reductions they promised to make in the 2016 Paris climate agreement. Asked if she is more hopeful, she says no: "I don't want you to be hopeful...I want you to panic. I want you to feel the fear I feel every day. And then I want you to act." Greta says it's only in action there is hope:

"This is where people usually start talking about hope, solar panels, wind power, circular economy, and so on, but I'm not going to do that. We've had 30 years of pep-talking and selling positive ideas. And I'm sorry, but it doesn't work. Because if it would have, the emissions would have gone down by now. They haven't. And yes, we do need hope, of course we do. But the one thing we need more than hope is action. Once we start to act, hope is everywhere. So instead of looking for hope, look for action. Then, and only then, hope will come. Today, we use 100 million barrels of oil every single day. There are no politics to change that. There are no rules to keep that oil in the ground. So we can't save the world by playing by the rules, because the rules have to be changed. Everything needs to change -- and it has to start today."

Have you felt the same worries about the environment and wondered what you can do about it? Check out the website for Fridays for Future, and see what you can do in your community!

Fridays for Future - #FridaysForFuture is a movement that began in August 2018, after 15 years old Greta Thunberg sat in front of the Swedish parliament every schoolday for three weeks, to protest against the lack of action on the climate crisis. She posted what she was doing on Instagram and Twitter and it soon went viral. On the 8th of September, Greta decided to continue striking every Friday until the Swedish policies provided a safe pathway well under 2-degree C, i.e. in line with the Paris agreement.

Silberman, Steve. Greta Thunberg became a climate activist not in spite of her autism, but because of it. [Online] Available https://www.vox.com/first-person/2019/5/6/18531551/autism-greta-thunberg-speech.2019.

Mitchell, Pat. These young women might just save the planet. [Online] Available https://blog.ted.com/these-young-women-might-just-save-the-planet/.March 11, 2019.