Often agricultural and environmental interests can be at odds. On the northern Great Plains, though, ranchers increasingly find that restoring native grasslands can benefit cattle and wildlife alike. 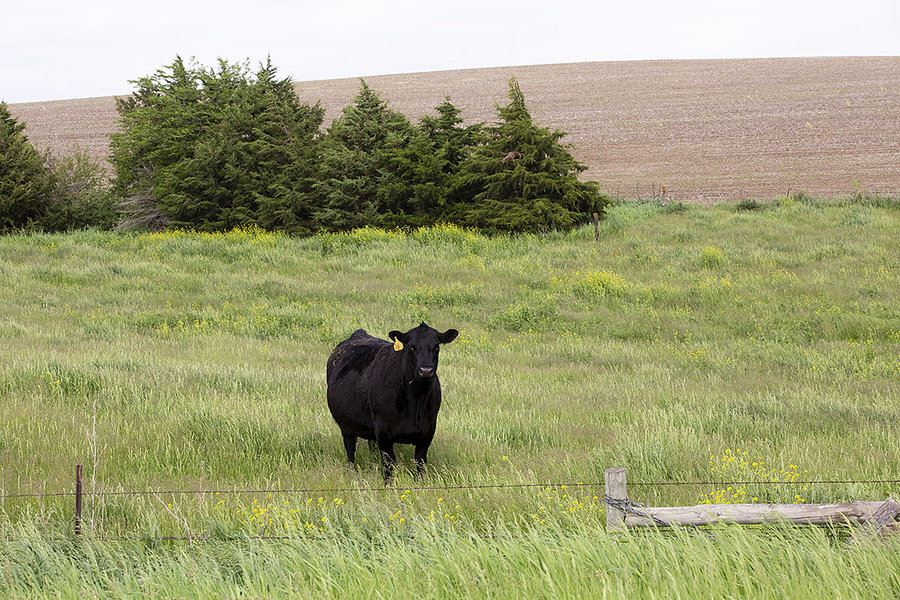 A cow grazes in grasslands outside town on June 3 in Obert, Nebraska. Many acres of prairie grasslands have been converted into crop fields – such as the one in the background of this photos.Melanie Stetson Freeman/StaffOn the left of the road lies a field of tan earth and stalk residue ​– cropland that is still unplanted because of the pools of water in the low spots. On the right lies his green pasture. It has less water, and what pools exist are nearly covered over with lush new grass that means extra feed for the cattle.

“Compare that picture right there,” says the Volga rancher. “If it takes crop insurance, government payments to keep people afloat [on the cropland on the left], how is that a sustainable approach?” In places, his own grassland is so thick with pintail ducks, deer, and other wildlife that it seems in almost constant movement as his car rolls by.

Slowly, a prairie restoration movement is gaining momentum here in the Great Plains. After decades of plowing up native grasslands to plant crops, some ranchers are moving in the other direction. Helped by environmentalists in a sometimes uneasy alliance, they are restoring prairie pasture, which not only improves water retention and sequesters carbon in the soil, but can also improve their profits by creating better feed, allowing them to brand and sell their beef directly to consumers, or through ecotourism.

“I’m guardedly optimistic that we will see continued growth in that [revival] as the tourist business grows,” says Rick Edwards, director of the Center for Great Plains Studies at the University of Nebraska. “There’s a lot of learning that has to happen for us to do it well.”

This new breed of ranchers faces formidable odds. Conversion of the Plains ​– one of the world’s largest remaining grasslands ​– to cropland continues. As of 2017, nearly a third of the northern Great Plains, a swath of land running from central Nebraska to southern Saskatchewan and Alberta, had been converted. In that year alone, more than half a million acres were plowed under. The silver lining: The rate of conversion slowed considerably compared with 2016 in every state except here in South Dakota. It’s not clear why. Also there was a pickup in cropland that had gone back to grass, although it’s not certain that will be a permanent switch.

Ranching to preserve the grasslands requires new modes of thinking. 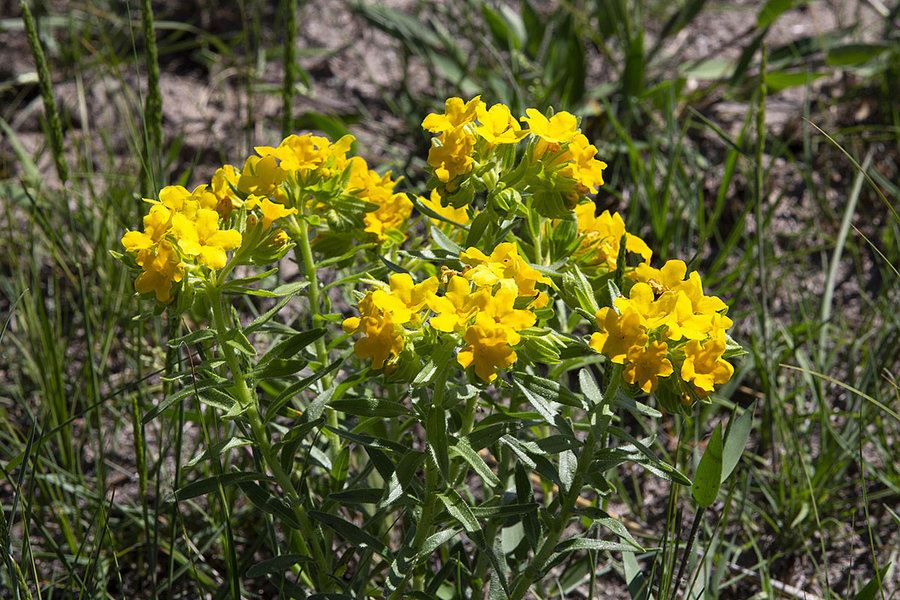 Puccoon wildflowers grow on the grasslands at ecotourism entrepreneur Sarah Sortum's ranch on June 4 in Burwell, Nebraska.Melanie Stetson Freeman/Staff“We’re getting to understand how important healthy grasslands are,” says Leo Barthelmess, a rancher outside Malta, Montana, and president of the Ranchers Stewardship Alliance. For him, a high priority is making sure that his cattle do not overgraze an area, which means frequently moving the cows. When his father started ranching in the area in 1964, he moved cattle 10 times a year. Now, Mr. Barthelmes moves them 100 times a year, so “the grass has the opportunity to regrow.”

The aha moment for Sarah Sortum, whose family diversified from strictly a ranching operation to an ecotourism business, came when she went searching for nesting areas of the greater prairie chicken on the family ranch. On the northern end, she heard their call and other birdsongs all over; on the southern end, “I didn’t hear anything,” she recalls. “I didn’t hear chickens; I didn’t hear grouse; I didn’t hear all the other little birds I was supposed to be hearing.”

She took her father out to listen: “His eyes got bigger. He says, ‘Oh. Oh!” An invasive red cedar, far more prevalent on the southern side of the ranch, was providing perches for birds that preyed on the ground-nesting prairie chicken and grouse. For years, getting rid of the trees had been a low priority for the family. Now that the birds were bringing tourists to the farm, removing the nonnative trees became a top priority.

“Before our tourism ... we just managed for grass, because that’s how we make money” ​– feeding grass to cattle, says Ms. Sortum. “Now ... the biggest difference from just managing for grass is managing for that diversity, because we realize that everything has value now ​– everything from the [flowering] forbs that we have out here, the wildflowers, to what they support.”

What changed Mr. Faulstich was the farm crisis of the 1980s. “I was either done or I was going to change,” he says. A typical cow-calf operator, he began looking into holistic management and realized the importance of preserving the health of the prairie. His son-in-law, with whom he ranches, is carrying on the tradition and has already converted some fields from cropland to prairie.

It’s this kind of mental shift that has environmentalists excited.

“I’m hearing from ranchers that are using [holistic management],” says Martha Kauffman, managing director of World Wildlife Fund’s Northern Great Plains program. “They’re making a whole lot more money. They’re able to have more animals on their ranch. [On the Plains] there’s been a negative story about loss and depopulation. But I think there’s a really exciting story about conservation. I’m thrilled!”

The rancher-environmentalist relationship gets bumpy sometimes.

“We’re having a standoff right now with World Wildlife Fund,” says Mr. Faulstich. Although the environmental group acknowledges the role cattle can play in maintaining the prairie, much as the bison did until a little over a century ago, it also urges consumers to eat less meat because of the environmental harm cattle can cause ​– from eroding soils to discharging methane, a greenhouse gas. That’s an affront to Mr. Faulstich, for whom cattle are not only an economic lifeline but also part of a long and positive Great Plains culture.

Others take a more nuanced position, emphasizing the areas where ranchers and environmentalists can work together to preserve the prairie.

“Environmentalists and ranchers have frequently been opponents and seen each other as enemies,” says Mr. Edwards of the Center for Great Plains Studies. “Through this kind of strategy, they can see that they have common interests ​– not the same interests, but there’s an overlap.”