How one ‘neighborhood hero’ is nourishing Buffalo after the shooting 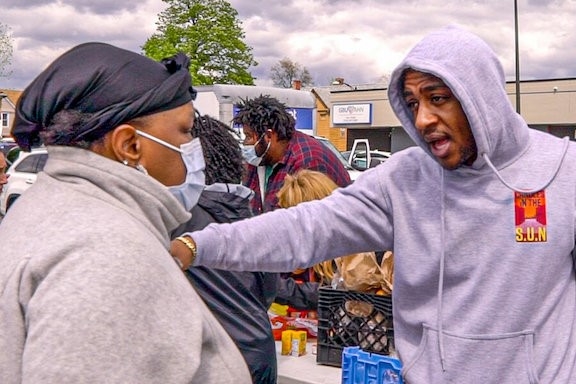 Dakarai Singletary, founder of Candles in the S.U.N., distributes food and supplies donated by local farms and a market in Buffalo, New York, on May 18, 2022. "Supplies are completely depleted, so we’re ensuring that people have everything accessible to them, with no hesitation or quantity limits," he says.Courtesy of Denzel Kirkland

When 13 people were shot (10 fatally) at a Buffalo, New York, Tops Friendly Markets store last weekend, Dakarai Singletary did what came naturally to him – the work of a hero.

As the founder and president of Candles in the S.U.N., a nonprofit based in Buffalo, Mr. Singletary and his team sprang into action. The group quickly organized the distribution of free fresh produce and supplies donated by local farms and another market. His goal? To “limit further trauma of returning to the location,” he says.

“Buffalo is a ‘my cousin’ type of city,” Mr. Singletary explains. “Everybody knows each other, so when [something like this] happens here, it hits a little bit harder.”

Standing in the gap for his community is nothing new for Mr. Singletary. At the height of the pandemic, the organization distributed thousands of pieces of personal protective equipment to people in need. And the group regularly conducts development camps and donation drives.

Mr. Singletary spoke with the Monitor recently about the organization’s current efforts and Buffalo’s reemergence from an unspeakable tragedy. The interview has been edited for length and clarity.

Where were you when you first heard about the shooting?

Actually, I was at home asleep. Every Saturday, we do a free youth basketball clinic from 9 a.m. to 1 p.m., and then we play baseball from 1 p.m. to 3 p.m. … [Afterward] I fell asleep. When I awoke, I saw that my brother had called me 15 times. … And a few of my contacts within the organization [had been] calling. … [Then] my lawyer’s wife called and she was like, “Hey, are you home? Are you OK?” She said there was a “racist mass shooter over on Jefferson.” … I heard her, but I didn’t really process it. Then I got on Twitter, and that’s when I really started seeing what was going on. 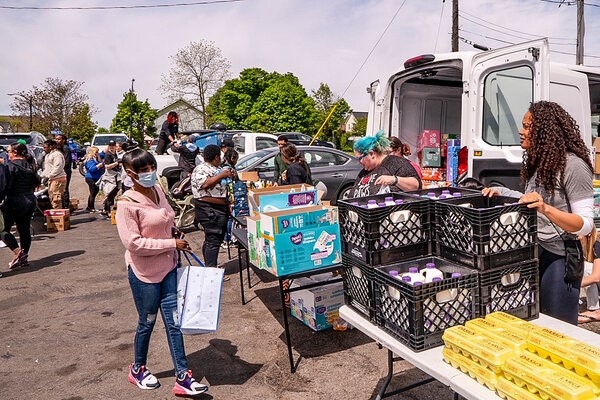 Courtesy of Denzel KirlandCandles in the S.U.N. heroes distribute food in Buffalo, New York, on May 18, 2022. "I never refer to people as 'volunteers,'" Mr. Singletary says. "They’re always 'neighborhood heroes.'"

When you say “neighborhood hero,” what does that mean?

Why did you choose this particular response in terms of free food?

[Tops is] the only grocery store accessible to 50 neighborhoods east of Main Street, which is where 87% of Black residents live in Buffalo. So that one store being closed is an issue for our community. …

You don’t just go to the grocery store for groceries. You go for baby formula, you go for Pampers, you go for everything. That’s what we’re doing. We’re providing all the baby supplies, because people are missing everything right now. Supplies are completely depleted, so we’re ensuring that people have everything accessible to them, with no hesitation or quantity limits.

What’s been the community response, in terms of the sense of morale juxtaposed with the actions of the shooter?

Honestly, I refuse to even give him any light. I’m a person that says, ‘How are we gonna prevent this from happening next time?’ I’m all about proactiveness. We can look back on 400-plus years of history, but we can also use our history to ensure that what’s happened to us doesn’t continue to happen to us.

We’re working on providing new food options for that neighborhood, and not just a one-time thing for one week, two weeks, three weeks, … not just when the news cameras are there, when it’s cool, when it looks good, but staying there consistently.

Talk about the level of commitment and investment it takes to be there perpetually.

People are always asking me, “Where do you work? What do you do?” This is my job, 24/7, being a neighborhood hero. That’s not something where you just take your hat off at night. I get calls at 3, 4 a.m. from my kids [I work with] at the schools checking up on me, parents asking me for things.

It’s not even just me. There are other heroes that … have taken time off [fully or partially to help]. You have jobs that understand what we provide to the community that are giving their workers time off with respect to what we’re doing for our community.

What inspired the name Candles in the S.U.N.? [S.U.N. stands for Save Ur Neighborhood]If you look at the logo, people are passing [each other holding candles]. People are helping one another to light their candles and to light one another’s candles. And that’s my whole thought with knowledge and information.

If I can pass my knowledge to you, help you light your candle, you pass it to somebody else. You light their candle, and we can light a neighborhood. You light up a neighborhood into a sun, and a sun is a very hot thing.

Our communities are seen as cold, … and we’re always trying to really change that. We aren’t what we’ve been painted out to be – we are far from it. I don’t care how others view us. We need to change how we view ourselves. So that’s what I’m really here to do.