In Russia, protesters risk prison charges to speak out about Ukraine

In Russia, a law was passed last month that outlaws the spread of “false information” about the invasion of Ukraine and disparaging the military. Now, hundreds of Russians are facing charges and possible prison sentences for speaking out against the war. 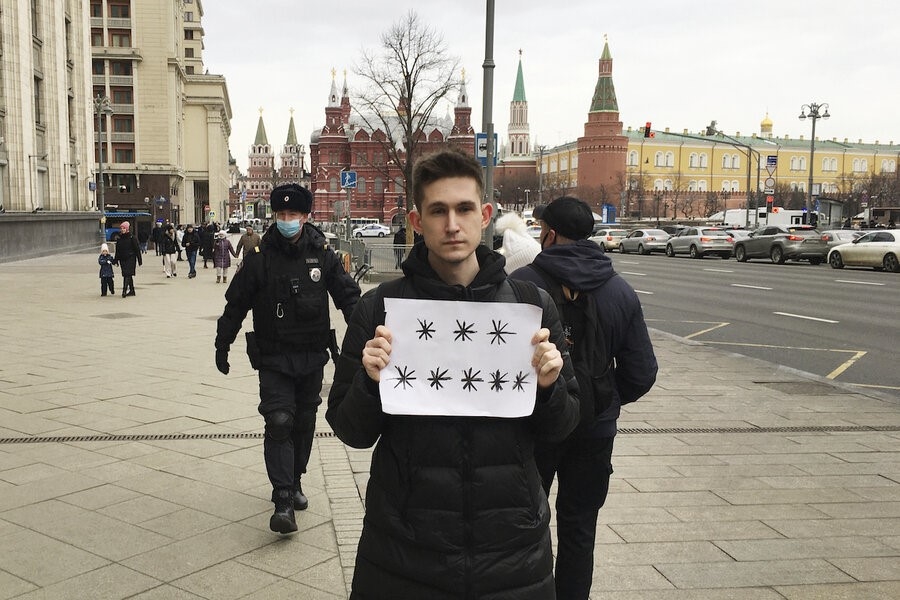 Police officers (left) prepare to detain Dmitry Reznikov holding a blank piece of paper with eight asterisks that could have been interpreted as standing for "No to war" in Russian, with the Kremlin in the background in Moscow, Russia, March 13, 2022. SOTA/AP/File

A former police officer who discussed Russia’s invasion on the phone. A priest who preached to his congregation about the suffering of Ukrainians. A student who held up a banner with no words – just asterisks.

Hundreds of Russians are facing charges for speaking out against the war in Ukraine since a repressive law was passed last month that outlaws the spread of “false information” about the invasion and disparaging the military.

Human rights groups say the crackdown has led to criminal prosecutions and possible prison sentences for at least 23 people on the “false information” charge, with over 500 others facing misdemeanor charges of disparaging the military that have either led to hefty fines or are expected to result in them.

“This is a large amount, an unprecedentedly large amount” of cases, said Damir Gainutdinov, head of the Net Freedoms legal aid group focusing on free speech cases, in an interview with The Associated Press.

The Kremlin has sought to control the narrative of the war from the moment its troops rolled into Ukraine. It dubbed the attack a “special military operation” and increased the pressure on independent Russian media that called it a “war” or an “invasion,” blocking access to many news sites whose coverage deviated from the official line.

against Nazi Germany and holding a copy of Tolstoy’s “War and Peace.” Another was reportedly detained for holding up a package of sliced ham from the meat producer Miratorg, with the second half of the name crossed off so it read: “Mir” – “peace” in Russian.

A law against spreading “fake news” about the war or disparaging the military was passed by parliament in one day and took force immediately, effectively exposing anyone critical of the conflict to fines and prison sentences.

Both were accused of posting “false information” about Russian attacks on civilian infrastructure in Ukraine on their widely followed social media pages – something Moscow has vehemently denied, insisting that Russian forces only hit target military targets.

But then the scope of the crackdown expanded, with police seemingly grabbing anyone.

Former police officer Sergei Klokov was detained and put in pretrial detention after discussing the war with his friends on the phone. His wife told the Meduza news site that in casual conversation at home, Mr. Klokov, who was born in Irpin near Kyiv and whose father still lived in Ukraine when Russian troops rolled in, condemned the invasion.

Mr. Klokov was charged with spreading false information about the Russian armed forces and faces up to 10 years in prison.

St. Petersburg artist Sasha Skolichenko also faces up to 10 years in prison on the same charge: She replaced price tags in a grocery store with antiwar flyers. On Wednesday, a court ordered Ms. Skolichenko to pretrial detention for 1 and 1/2 months.

The Rev. Ioann Burdin, a Russian Orthodox priest in a village about 300 kilometers (about 185 miles) northeast of Moscow, was fined 35,000 rubles ($432) for “discrediting the Russian armed forces” after posting an antiwar statement on his church’s website and talking to a dozen congregants during a service about the pain he felt over people in Ukraine dying.

Rev. Burdin told AP his speech elicited mixed reactions. “One woman made a scene over the fact that I’m talking about [it] when she just came to pray,” he said, adding that he believed it was one of those hearing the sermon who reported him to the police.

Marat Grachev, director of a shop that repairs Apple products in Moscow, similarly got in trouble when he displayed a link to an online petition titled, “No to war” on a screen in the shop. Many customers expressed support when they saw it, but one elderly man demanded it be taken down, threatening to report Mr. Grachev to the authorities.

Police soon showed up, and Mr. Grachev was charged with discrediting the military. A court ordered him to pay a fine of 100,000 rubles ($1,236).

Another court ruled against Moscow student Dmitry Reznikov for displaying a blank piece of paper with eight asterisks, which could have been interpreted as standing for “No to war” in Russian – a popular chant by protesters. The court found him guilty of discrediting the armed forces and fined him 50,000 rubles ($618) for holding the sign in central Moscow in a mid-March demonstration that lasted only seconds before police detained him.

“It’s the theater of the absurd,” his lawyer Oleg Filatchev told AP.

“The war brought about so many unbearable challenges, grief, and tears, that it’s impossible to forget. There is no forgiveness and justification for those who once again are harboring aggressive plans,” Mr. Putin had said, according to the Kremlin website.

Mr. Dmitriev was fined 30,000 rubles for discrediting the Russian military. That prompted him to post Friday on Facebook: “The phrase by Vladimir Putin, and ergo he himself … are discrediting the goals of the Russian armed forces. From this moment on, [internet and media regulator] Roskomnadzor must block all speeches by Putin, and true patriots – take down his portraits in their offices.”

Net Freedoms’ Dr. Gainutdinov said that anything about the military or Ukraine can make a person a target. Even wearing a hat with the blue and gold of the Ukrainian flag or a green ribbon, considered a symbol of peace, have been found to discredit the military, the lawyer added.

Mr. Reznikov, who is appealing his conviction for the poster with asterisks, said he found the crackdown scary. After his first misdemeanor conviction, a second strike would result in criminal prosecution and a possible prison term of up to three years.

Both Rev. Burdin and Mr. Grachev, who also are appealing, received donations that exceeded their fines.

“I realized how important it is, how valuable it is to receive support,” Mr. Grachev said.

Rev. Burdin said the publicity about his case spread his message far beyond the dozen or so people who initially heard his sermon – the opposite of what the authorities presumably intended by fining him.“It’s impossible to call it anything other than the providence of God,” the priest added. “The words that I said reached a much larger number of people.”