In December, 1997, Julia 'Butterfly' Hill went out to Northern California to get involved with the efforts of Earth First!, which was attempting to save the redwood forests from the Pacific Lumber Company. When she arrived, the activists were decamping for the winter, and nothing much seemed to be happening. Then, as she told a Mother Jones reporter, she heard someone walking around asking for a volunteer to climb "Luna," a 200-foot redwood tree in imminent danger of being felled by PL. On December 10, Hill climbed Luna.

Hill thought she might stay up there a month. But the month turned into a year, and the year doubled and high in the tree something of a Swiss Family Robinson story unfolded before the eyes of the world.

Her home was a 6-by-8-foot tree house, 180 feet up. For two years she wrote poetry, gave interviews and climbed branches. She slept, cooked and weathered violent storms in the tree, which the activists had named "Luna." Volunteers visited Hill nightly, sending up supplies in a bucket, sometimes climbing up for a visit. Hill spent her days writing in her journal. She also wrote poetry:

She was interviewed on CNN and featured in Time magazine. She claimed that she spent two to eight hours a day giving interviews on her cell phone. For two years, the question loomed: Who would win, the tree sitter or the corporation?

It ended as quietly as it began. On December 17, 1999, the various logging companies (collectively known as PALCO) and Hill reached an agreement. The company got $50,000 dollars and Luna was given another thousand years and a 600 foot buffer zone. And on that note, Julia Hill was belayed down her giant friend. Down she rode, absurdly tiny in the gathering fog, to touch the ground after two years. She fell down and wept amidst the roots of a being that was born long ago into a world that wasn't quite so concerned with owning and cutting as ours is.

"I understand to some people, I'm just a dirty, tree-hugging hippie," she said that day. "But I can't imagine being able to take a chainsaw to something like this."

The Circle of Life Foundation - Founded in 1999 by Julia Butterfly, this organization's mission is "to activate people through education, inspiration and connection to live in a way that honors the diversity and interdependence of all life. "
The Nonviolence Web - is a Guide to the Contemporary Peace Movement.
EnviroLink Home Page - is a hub for environmental websites.
Save the Headwaters Forest Campaign
Earthkeeper Hero David Nathan Chain - was an activist killed during a protest in 1998.

Look at Environmental Protection Information Center for more information about how to save the last of Wild California. 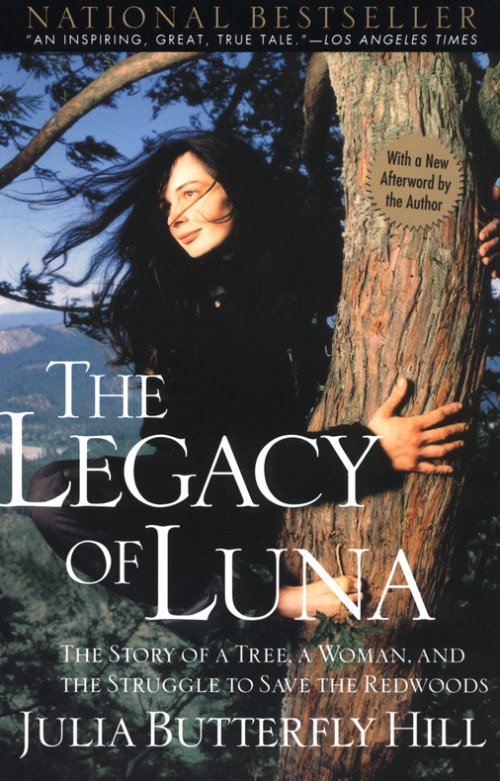 The Legacy of Luna: The Story of a Tree, a Woman and the Struggle to Save the Redwoods
Julia Hill 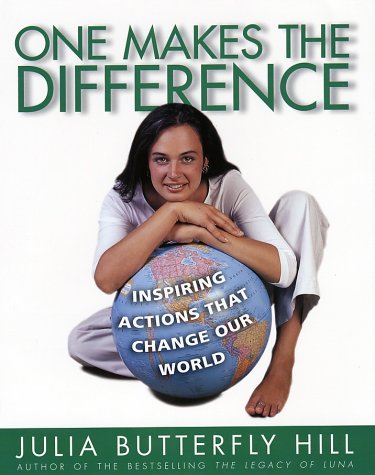 One of the United States' biggest environmental problems right now is loss of wilderness. This problem is due to an expanding human population and the ever-increasing demand for both material resources and physical space. Not only loss of wilderness, but destruction of wildlife habitat results. The over-harvesting of forests, which are dependent upon a combination of new and old-growth trees, is a prime example of wholesale habitat destruction. What are going to to do about this?

Earth First! is a group of environmental activists who work--often at great personal cost--to save the natural world from human depredation. The following story involves an Earth First!er's efforts to protect the Headwaters Forest in Northern California. In 1984, the MAXXAM corporation bought Pacific Lumber (PL), a logging company. Since that time, Earth First! alleges that PL has been overcutting the forest, and that this activity caused a mudslide which destroyed seven homes in the nearby town of Stafford, and wiped out thousands of acres of irreplaceable old-growth trees.