Jackeane dos Santos Leite / Saving the Amazon, one wood-carved spoon at a time 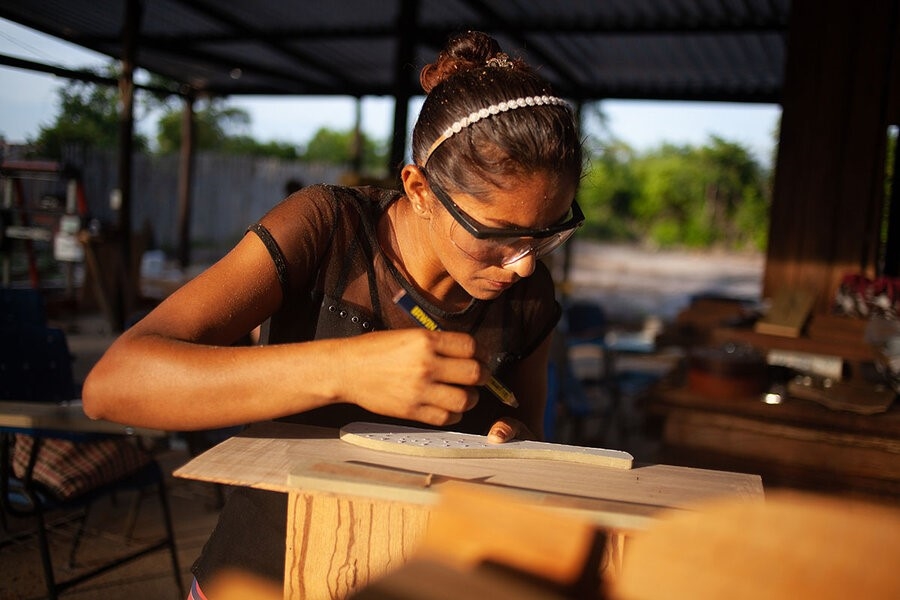 Jackeane dos Santos Leite traces a shape onto a plank of Brazilian oak wood. She is taking part in a workshop that aims to teach residents of villages in the Brazilian Amazon new income-generating skills, such as woodworking. Her village was once an illegal logging hub. Ana Ionova

Jackeane dos Santos Leite leans over a thin plank of wood, her brow furrowed above her plastic goggles. Carefully, she traces the shape of a spatula before powering up a small electric saw.

“I’ve only used this one a few times,” she says through the cloud of sawdust, her hands unsteady as she cuts into the tauari, or Brazilian oak wood. “The shape has to be just right.”

On a scorching afternoon, deep in the Brazilian Amazon, Ms. Leite is learning the art of woodcrafting from a trio of designers from Rio de Janeiro, visiting the riverside village of São Francisco das Chagas do Caribi for the occasion. Wearing hard hats and earmuffs, eight trainees busily cut, carve, sand, and polish wood under the guidance of the experts.

The village is an unlikely setting for a workshop like this. Once an illegal logging hub, the region lost some of its most valued tree varieties a few decades ago, before the authorities turned it into a protected reserve spanning hundreds of thousands of acres.

Now, residents hope the training will help kick-start a new woodworking venture. By making tableware such as platters and spoons from legally harvested timber, they hope to earn income from the forest without destroying it.

“This makes me think of my grandfather,” Ms. Leite says over the rattle of the generator powering the tools. A longtime settler, “he made canoes; he made everything. But things are really different now. We’re doing things legally.”

A glimmer of hope

This tiny victory, on the front lines of the battle to save the Amazon, offers a glimmer of hope as the world scrambles to slash carbon emissions and defuse the climate emergency.

World leaders meeting in Glasgow, Scotland, at the COP26 United Nations climate summit have also taken up the challenge. On Monday they pledged to halt deforestation by 2030, and to spend $19 billion on the effort, including on projects, much like the woodworking venture here, that “enhance rural livelihoods ... through ... recognition of the multiple values of forests.”

Pledges are just pledges, though, and a similar international agreement in 2014 has had little impact. And for all the hard-fought efforts of Ms. Leite and her neighbors, swaths of the Brazilian Amazon are still being cleared and burned at a breakneck pace. Deforestation has hit its highest level in a decade, pushing Brazil’s emissions up 9.6% in 2020, even as the pandemic froze economies and triggered a short-lived emissions dip elsewhere in the world, a new report shows. 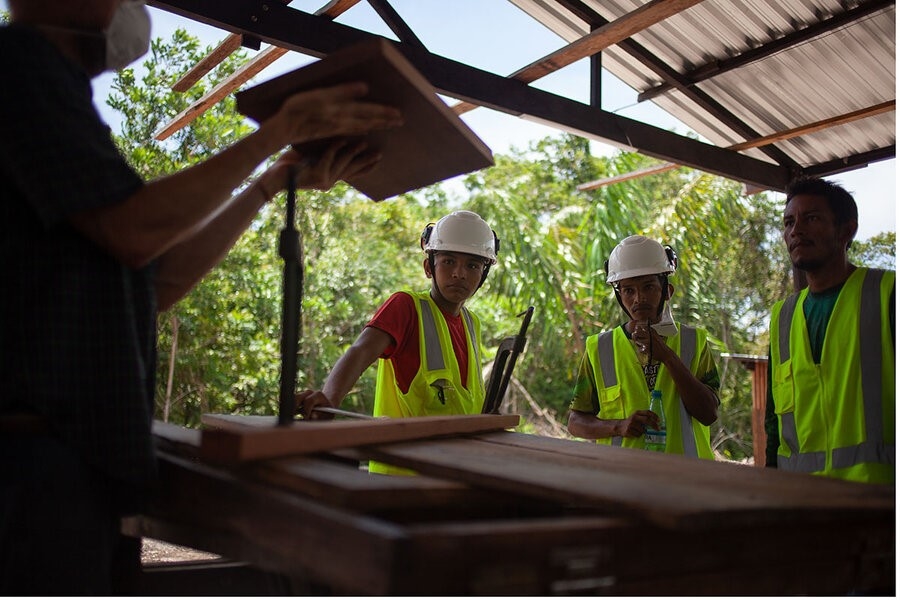 Ana ion ovaTrainees learn the art of woodcrafting at a workshop in the village of São Francisco das Chagas do Caribi, in Brazil’s Amazon. The workshop, held by three designers from Rio de Janeiro, is part of an initiative to help communities in the reserve build new, sustainable income streams that don’t rely on forest destruction.

Often dubbed the “lungs of the planet,” the Amazon is one of the world’s most important carbon sinks, absorbing about 2 billion metric tons of CO2 per year. But parts of it now emit more carbon than they capture, and scientists warn the rainforest is coming dangerously close to a tipping point at which it will turn into a savanna, with devastating results for the climate, locally and globally.

Many blame President Jair Bolsonaro, who has hitherto defied all global calls to curb deforestation while gutting Brazil’s environmental agencies. Under his watch, fines for environmental crimes fell to their lowest in over two decades. Mr. Bolsonaro has also vowed to open up protected forests and Indigenous lands to exploitation, which his critics say has emboldened cattle ranchers, wildcat miners, and land-grabbers.

“There's a total lack of environmental control,” says Rômulo Batista, a campaigner for Greenpeace Brazil. “And the government has done little to stop it. In fact, it has undertaken a project to dismantle Brazil’s environmental policies.”

Against this backdrop, many observers remain skeptical of Mr. Bolsonaro’s promises and Brazil's signature on yesterday’s COP26 deal. “He is giving speeches, trying to make the world believe that he’s taking action,” Mr. Batista adds. “But there is nothing to back these promises.”

Still, it’s not too late for Brazil to rein in deforestation, which accounts for nearly half of the country’s carbon emissions. Most experts agree that will require a return to tougher environmental policing, including clear signals from the top that illegal encroachments into the forest will not be tolerated.

Cattle ranching and agriculture – the largest drivers of deforestation – must also be transformed, increasing productivity and making use of degraded land. And, to achieve long-term change, it is crucial that more sustainable local economies be fostered, so that those living in the Amazon have ways to earn a living without razing the forest. 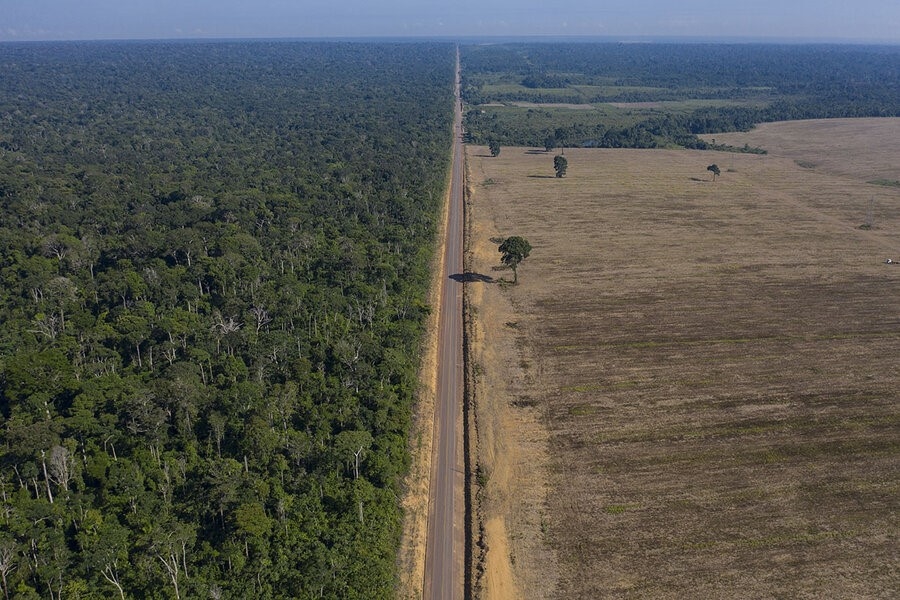 Leo Correa/AP/FileTrainees learn the art of woodcrafting at a workshop in the village of São Francisco das Chagas do Caribi, in Brazil’s Amazon. The workshop, held by three designers from Rio de Janeiro, is part of an initiative to help communities in the reserve build new, sustainable income streams that don’t rely on forest destruction.

“Communities in the Amazon play a key role ... in mitigating the climate crisis,” says André Vianna, head of forest technologies and management at Idesam, a nonprofit organization developing projects in the Brazilian Amazon. “But they need to have sustainable sources of income in order to stay in their territories and preserve them.”

And small successes like the one in São Francisco das Chagas do Caribi suggest a way forward. With support from Idesam and other nonprofit groups, residents opened an eco-lodge in 2019, hoping to earn sustainable income through tourism. Recently, they also built a refinery for essential oils extracted from the forest, to be sold in shops hundreds of miles away.

“Today we know that, by taking care of the forest, we can earn a lot more than by toppling trees,” says Dona Elisângela Conceição Cavalcante, who runs the eco-lodge. “So today, knowing what's right, nobody wants to do harm.”

When COVID-19 hit tourism, things got tough for local people. Earlier this year, nongovernmental organizations helped residents set up the woodworking shop that they hope to turn into another significant source of income. Villagers are hoping that the designers will introduce their tableware to customers in cities such as São Paulo and Rio de Janeiro, boosting their sales.

“We are looking to put to use the community’s traditional knowledge of timber and of the forest,” says Mr. Vianna. “And we’re helping them with the know-how needed to market their products, so they can get a better price.”

Gracilázaro Rodrigues Miranda, a local resident who is one of the project leaders, spent over two decades logging forest in the Amazon, sometimes felling trees illegally. Now, he says the community is working hard to tap forest resources sustainably, using only timber from a licensed area of the reserve where limited extraction is allowed.

“We didn’t know how to preserve the forest before,” Mr. Miranda says. “Now, we know legal timber is much better; it’s the way forward for us.”

Back at the workshop, Ms. Cavalcante, the lodge keeper, shreds a jungle vine into long, wispy fibers that will become bristles on a wooden cleaning brush. She knows saving the Amazon is an uphill battle, with the odds stacked against her. But, she believes her small village – and others like it – can make a difference.

“I believe we have huge power to change our reality,” she says. “So I still have hope for better days ahead – for us and for the world.”