A memorial for Justin Bhansali and Jesse Thyne was inaugurated on November 4, in Pita.

About 25 staff members from the Peace Corps Office in Conakry made the overnight trip to Pita where they joined roughly the same number of PCVs from throughout Guinea and local officials for a short dedication ceremony. I'm probably a little biased, but I think the memorial is very impressive and tastefully done (as you can see for yourself in the attached photos).

A great deal of credit for the success of this project goes to second-year PCVs Dana Jones and Susan Barkley, who organized the construction. A plaque on the front dedicates the memorial to the honor of Justin and Jesse, and plaques on either side present messages about safe driving. The Prefet of Pita, Mayor of Pita, Dana Jones and I gave brief dedications speeches. You won't be surprised to hear the most poignant and moving was delivered by Dana. There was a very nice lunch prepared by the local officials for the assembled crowd of about 80 after which our group from Conakry quickly returned home.

I hope you enjoy the photos. 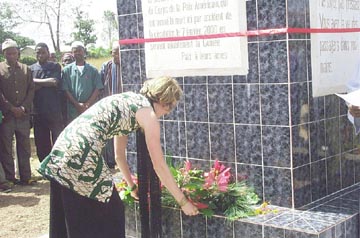 Back to the Jesse Thyne Main Story