by Rivers from San Diego, California in United States 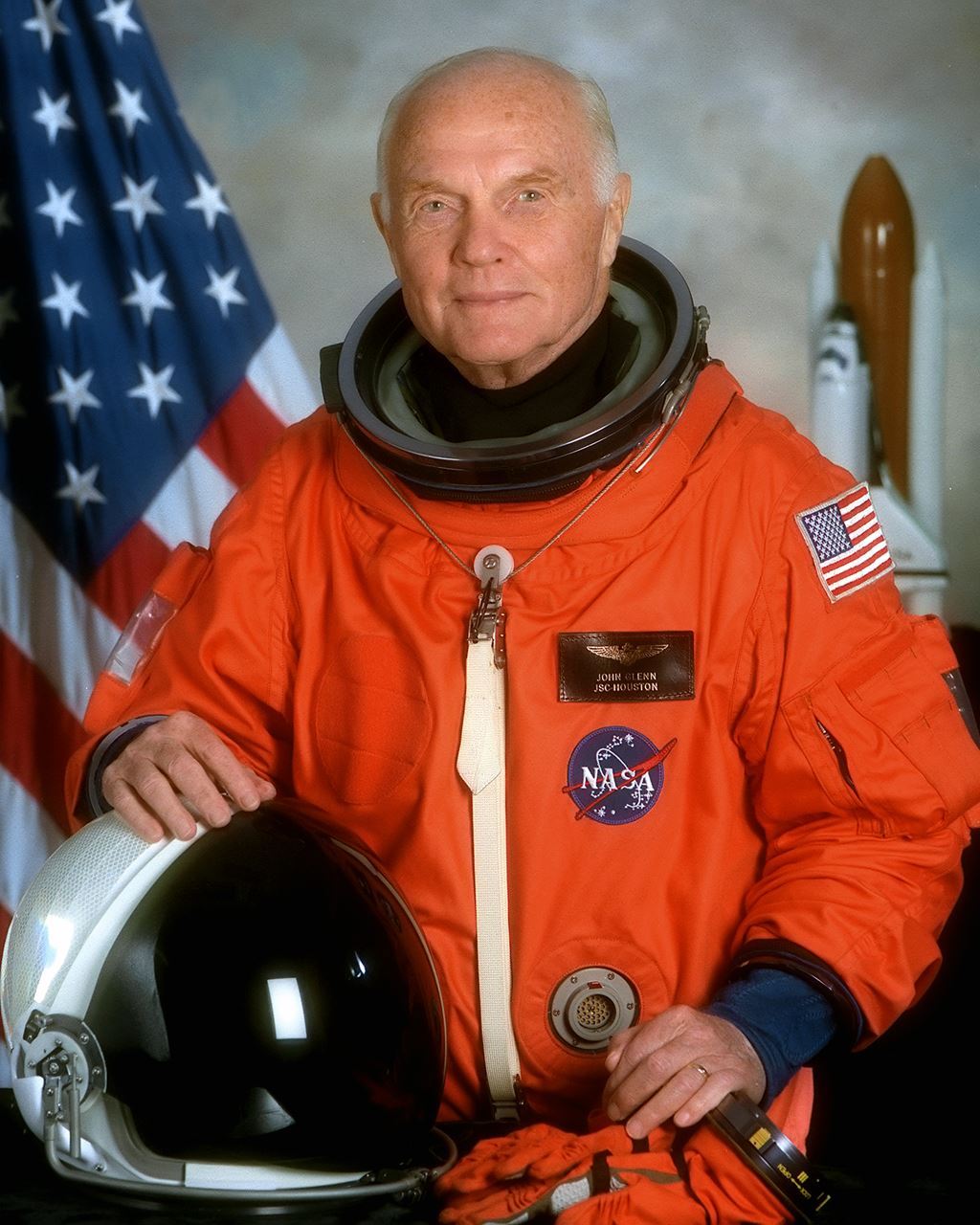 John GlennNASA [Public domain]“Good luck, have a safe flight, and...once again, Godspeed, John Glenn," whispered pilot Scott Carpenter quietly as John Glenn was minutes from launching into space (Associated Press). John Glenn was about to become an American hero by being the first American to orbit the earth in space. Glenn officially entered the U.S. into the Space Race. Glenn grew up in the small town of New Concord, Ohio. He met his wife, Annie Castor, at a young age, saying later in life that he could not remember a time when he did not know Annie. As a little boy, Glenn loved planes and wanted to become a pilot. World War II gave him that opportunity. In 1941, foregoing college, Glenn received his pilot’s license and joined the Marines as a fighter pilot ("John Glenn." John). After the war and following his historical first flight, Glenn went on to become a senator from the State of Ohio, serving four full terms. In 1998, Glenn took his last trip to space and died in 2016 at age 95 ("John Glenn." Contemporary). A hero must be ambitious, determined, and brave in order to create a legacy that people around the world will never forget. As a war hero, astronaut, and senator, John Glenn seized the moments of opportunity that life presented and throughout his life personified the attributes of a hero. 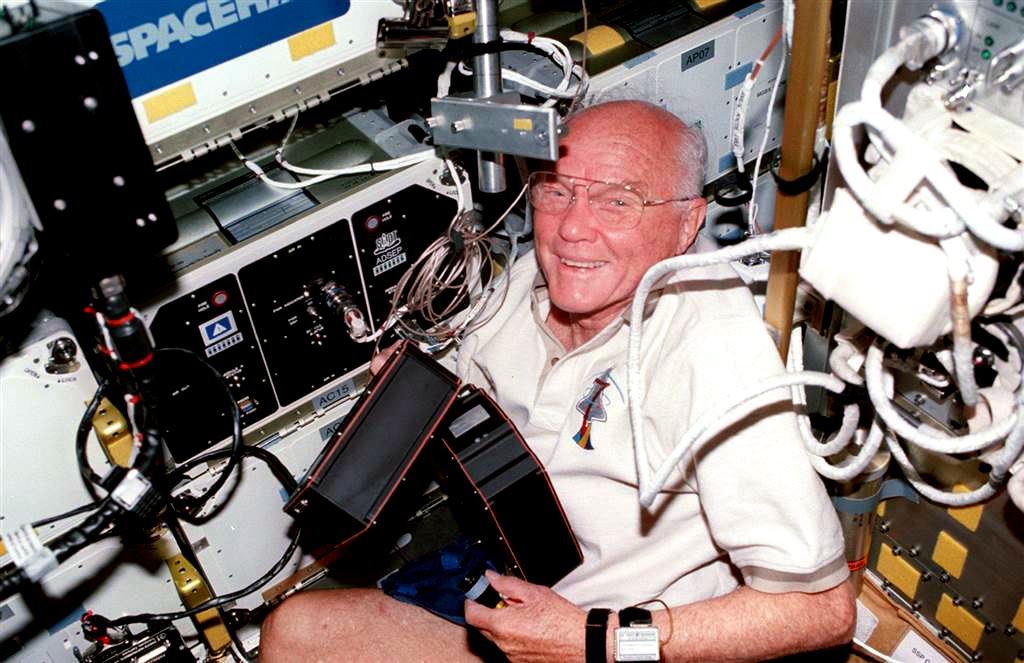 John GlennNASA [Public domain]Imagine being strapped to a gigantic rocket and shooting into space with no one around and no one to rely on. Even if everything goes as planned, the unknowns of space flight present a real risk of death. Not many people would be brave enough for this type of job, but there were some: “The program was dangerous. Astronauts were putting their lives and careers at risk. But the mission was important to U.S. government and military” (Streissguth). NASA was soon creating new advanced technology that would launch Glenn into space. In order for Glenn to override the new risks and dangers posed by space travel, he had to possess the attribute of bravery. After the first Russian went into space and orbited the Earth, NASA started working twice as hard to get Glenn ready for takeoff. Glenn and NASA worked for years in order to train and prepare for what became the Friendship 7 mission that propelled Glenn into the American consciousness as the first American to orbit the earth. Glenn’s bravery was evident as he tested new systems and spacecraft being prepared for space. Because of the dangers and risks associated with space flight, NASA was on the lookout for men that could face death and still perform, and who could cope with the many possible outcomes of a trip into space. The story goes, “Shortly after 8 a.m. on February 20, 1962, technicians at Cape Canaveral, Florida, closed the side hatch of John Glenn’s Friendship 7, sealing the 40-year-old Marine pilot into his tiny, one-man spacecraft. After a series of schedule slips that winter, this would be NASA’s second attempt in less than a month to launch the first American into orbit. From this point on, Glenn’s only contact with the outside world was through the headphones in his helmet” (Chaikin). Imagine going up to space alone. Imagine being in space alone. Imagine going down back to earth alone. Imagine being a test subject. Not many people would like that or be able to do it, but John Glenn loved to do it. He showed his bravery by going to space and trying things that had never been done before. 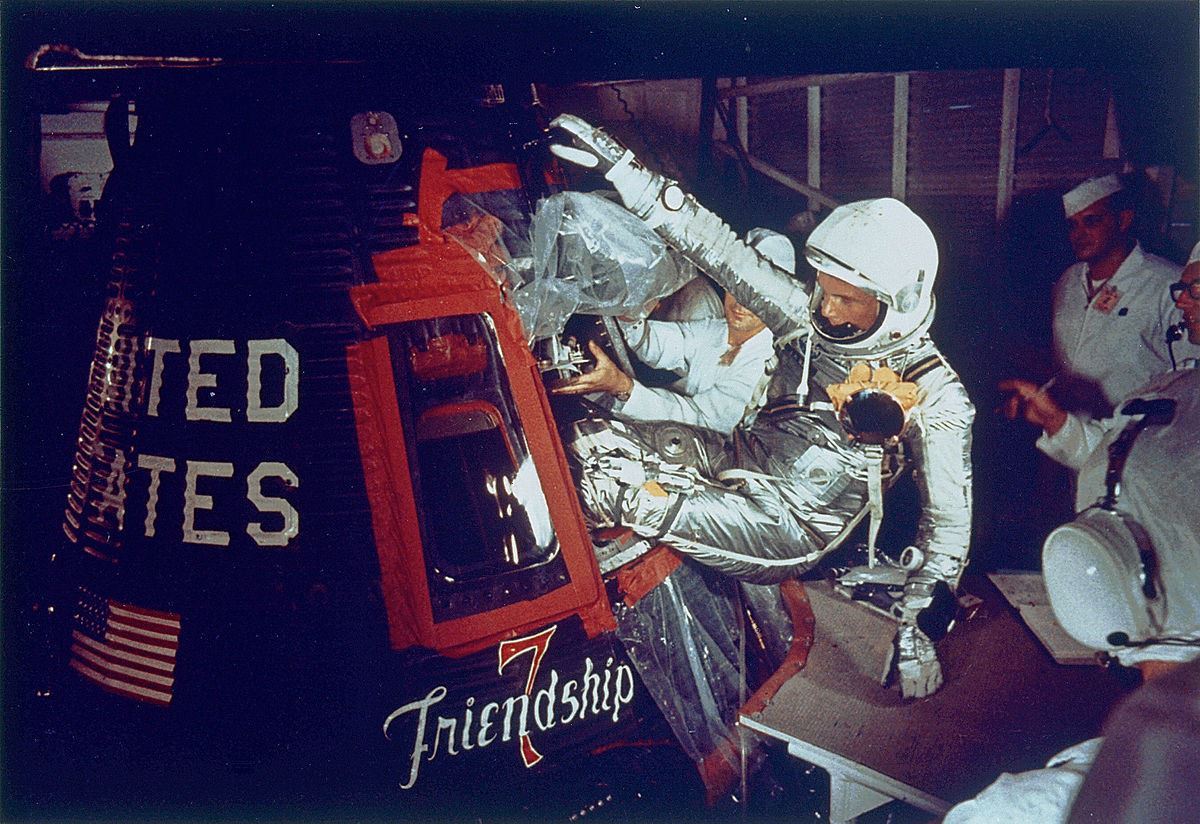 John Glenn Entering Friendship 7NASA/photographer unknown [Public domain]Beautiful opportunities always come when determined people set goals. NASA needed individuals who were determined and could follow through on their training and complete their missions regardless of the challenges. When trying to join the NASA organization, Glenn faced some difficulties but was able to push through. When faced with the possibility of not being able to join NASA, “Glenn tried to join the program anyway. He also asked his old commanding officers for recommendations” (Streissguth). He knew his chances were slim, but he took steps to increase those chances and applied to the program. Determination was a must-have attribute for NASA astronauts due to all that would be required of them and the difficulty of the training program. Glenn’s historic flight is evidence of his determination to go to space and also his commitment to what he was doing. Being the fifth person in space was a big responsibility and a huge risk. His determination was what allowed him to continue to do what he was doing. He went through rigorous training, waited months, had delays, and repeated things he had already done perfectly. A person who wasn’t dedicated and determined would very easily have given up, but not Glenn. In his old age, Glenn wanted to go to space one more time and break another record, “One reason was because of his age--he would be into his 80s if he served the full six years--but he had another issue as well: he had persuaded NASA to send him back up in space” ("John Glenn." Newsmakers). Glenn had to persuade NASA to get him up into space again, and it was not easy. He had to justify the reasons why he should go into space again - what purposes could be achieved and what benefits could be gained. And he was not going to take no for an answer. Glenn was very determined to get into space again, “Thus Glenn began his effort to get himself back into space. He got in touch with NASA and, armed with scientific data, offered himself for a mission. He was told that he had to convince research scientists of the validity of his research and that he had to be able to pass the same physical required of every astronaut. Glenn succeeded in both areas. Scientists found his research credible, and NASA doctors cleared him for the mission” ("John Glenn." John Glenn). Glenn was so determined that he contacted NASA and offered to go up to space and perform experiments on himself to see what would happen to the body of an elderly person in space. He successfully bargained his passage onto the shuttle, showing once again his unique determination. 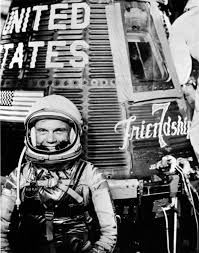 John Glenn Next to Friendship 7nasa.govJohn Glenn was a pioneer in space, the fifth person to travel there. He had to face some challenging times and he had to be determined, ambitious, and brave in order to do so. John Glenn’s ambitions for adventure led him to enter the space program, which required bravery and determination. He had an exceptional career as a pilot, Marine, husband, father, son, senator, and astronaut and wanted to inspire people as he completed each of his jobs. Glenn once said, “To me, there is no greater calling … If I can inspire young people to dedicate themselves to the good of mankind, I've accomplished something” (“Remembering”). I take this to heart. John Glenn inspires me because of all the things he has done in his life to seek new adventures, set ambitious goals and work hard to achieve those goals, all without forgetting a grander vision of helping and educating others. His legacy will live on to inspire me and show me that I can do as many things as I want to. I can complete goals, overcome challenges and achieve my ambitions. He might not have been a perfect person, but he is my hero because of what he did, and how he inspires others to literally shoot for the stars.

“Remembering My Friend and Hero John Glenn.” The Wright Brothers | The Wright Company,