by Casey from Laguna Beach 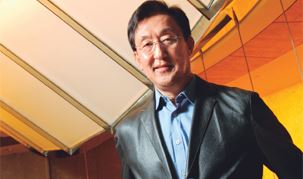 Every Tuesday night, Kingston Technology comes alive with the sounds of the '60s and '70s. Parked just outside the corporate headquarters, I can hear the distant sounds of My Girl being played by a full orchestra. Walking into the rehearsal room, the swelling sound of violins and piano meet my ears. John Tu sits in the back, keeping a steady tempo on drums, with theatrical lights flashing around the nonchalant expression on his face. The singer, an impersonator from Las Vegas, croons Just My Imagination to his invisible audience. It's easy to say in the musical world that you are what you play. I think the fact that Tu plays the drums speaks a lot about his personality. He keeps everything in order at a steady pace and watches the music get set into motion. It was truly a beautiful sight to see all these talented musicians like my father in sync with this visionary tycoon.

John Tu was born in Chungking, China and later moved to Taiwan. He had a keen liking for rock and roll. Due to a lack of success at school, he moved to Germany, where he lived for many years and worked as a cook in his uncle’s Chinese restaurant and as an apprentice welder. He was treated unjustly as an outsider and a servant to his superiors.

John moved to the United States, where he believed his true calling to be. He met up in Southern California with David Sun, whom he knew through a mutual friend. The two began a small business in personal computer memory out of their garage. The garage enterprise grew exponentially until the day of October 19, 1987, or the big stock market crash known as Black Monday. David and John lost everything. In an interview, John said, “The day the market crashed was the beginning of our American Dream. Had we not lost everything I guarantee you that there may not be a Kingston Technology.” Together, they built the company back up step by step, until they became the top independent memory company.

Humbled by his journey from an immigrant worker in a foreign country to one of the wealthiest Americans, according to Forbes Magazine, John Tu finds ways to give back to people. He is the main contributor to Erin Gruwell's Freedom Writers Foundation. Moved by the aspirations of Erin Gruwell, Tu donated hundreds of thousands of dollars to help her underprivileged students. He took a personal interest in the lives of the students and never gave a second thought about contributing his time and money. He treated the students to dinners and listened to them, earning their respect and appreciation while they earned his.

John Tu has been involved with several amazing projects over the years. His latest ambition involves homeless street kids in Brazil learning drums in exchange for food and a sense of family. Tu even sent one of the drummers from his California Dreamin' band down to Brazil on a mission to go into one of the most dismal slums of Brazil to reach out to the children through music. John Tu provides much needed support to projects in which he can directly impact the lives of young people.

An extraordinary man with an enormous appreciation of human life and talent, John Tu gives hope to the business world that is so full of greedy and self-important individuals crowding the headlines. Men like John Tu would rather sit in the back of a transformed business headquarters keeping the tempo for a room of talented musicians. John Tu said, “I often tell people, you know, I think in one’s lifetime if you have just touched someone, one person, and made a difference, then I think you are already very, very, successful.”

There is no glamor in the life of a professional piano player. It consists of late hours, long car rides, and sometimes unappreciative clients. But, somehow my dad has managed a full career of sharing his wondrous talents and still can support our family of four. That is so much pressure to carry directly on his fingertips.

About two years ago, one of my dad’s friends recommended him for a new band. A successful business owner wanted to start playing music and he wanted a full orchestra to accompany him. The business owner was John Tu, co-founder of Kingston Technologies, the leading independent manufacturer of memory chips. The band, JT and The California Dreamin’, began rehearsing in his corporate headquarters. John is the drummer, my dad is on keyboard, and around 25 other musicians pick up their respective guitars, basses, trumpets, violins, bongos, and tambourines. This kind of lofty ambition was nothing new to Tu.

Click here to listen to the John Tu story