It’s a part of car culture in California that’s not well understood. Lowriders promote respect for the values of “la familia” and community as well as take pride in their cars. 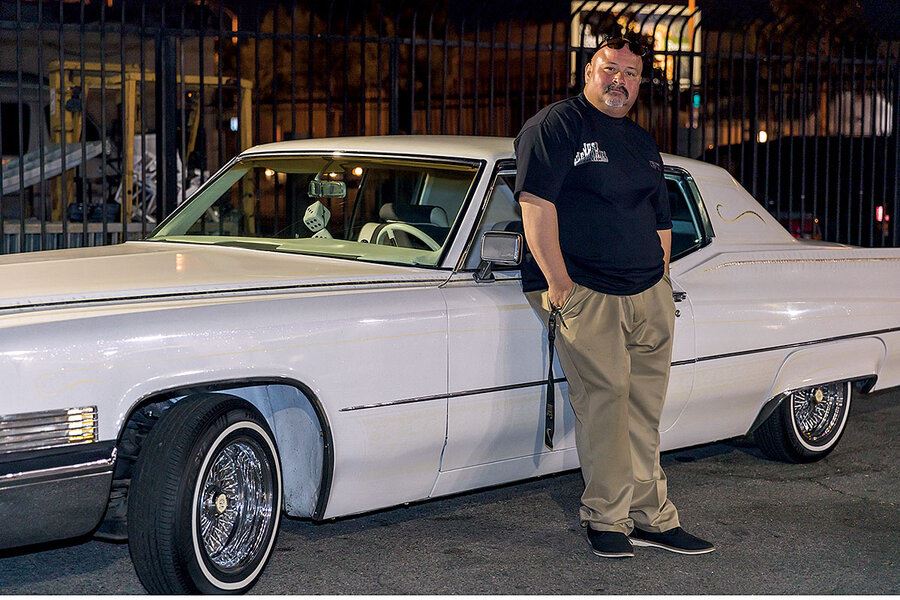 Maxim Elramsisy/Special to The Christian Science MonitorIn 2019 Juan Ramirez co-founded the Los Angeles Lowrider Community, a group of classic car and lowrider enthusiasts whose culture of activism dates to the 1960s. Respect – for property and for others – is a central tenet.

The Los Angeles Lowrider Community (LALC) wasn’t about to let the shop owners along the famous boulevard where they cruise bear the rage of people taking advantage of the unrest following George Floyd’s death. “We weren’t having that [looting],” says Mr. Ramirez.

He never questioned that the LALC members would answer his call to protect the neighborhood. Community is a key part of lowrider culture. And Whittier Boulevard is more than a famous boulevard where they cruise. It is the backbone of that community.

“A lot of these businesses were working real hard, trying to recover from the pandemic,” says Mr. Ramirez. In appreciation, the shop owners responded in kind: “The community started feeding us,” he says – seafood, pizza, and tacos to nourish them as they stood watch. This reciprocation illustrates the symbiotic relationship between LA lowriders and their neighborhoods – a relationship that has spanned decades.

Born in Boyle Heights and raised in South Los Angeles, Mr. Ramirez spends his days working as a welder and his nights cruising Whittier Boulevard with his wife and three kids. He drives a long, white, and spotless 1970 Cadillac Coupe deVille named Sugar.

“You’re driving on artwork, so you want to be delicate,” stresses Johnny Torres, an influential member of LALC who sports a baby blue ’54 Chevy. Mr. Ramirez agrees.

From the first time, as a little boy, that Mr. Ramirez sat in a lowrider, a family friend’s ’64 Chevy Impala, he quickly learned that “getting into a nice car – you had to be very proper.” It’s a lesson he instills in his kids, ages 5, 8, and 15.

After they learned that some of the men who attended the lowriding events were listed as sex offenders on the Megan’s Law website for California, Messrs. Ramirez, Wilson, and Perez assembled the local car clubs to gauge who was there to help the community and who might be there to harm it. LALC member clubs came to an agreement: “If you’re on that list, you can’t be around us,” Mr. Ramirez says. For LALC members, lowriding isn’t just a commitment to a tricked out car; it’s a commitment to the well-being of the community.

Juan Ramirez stands with his 1970 Cadillac Coupe deVille named Sugar in Downey, California, Nov. 18, 2020. For Mr. Ramirez, lowriding is about la familia and showing "my kids I was doing something good – a small little legacy I can give them.”Maxim Elramsisy/Special to The Christian Science Monitor

“A true lowrider rides from the heart. It’s about family, respect, and community,” says Denise Sandoval, professor of Chicana and Chicano studies at California State University, Northridge. Dr. Sandoval, who curated two exhibitions about lowrider culture for the Petersen Automotive Museum in Los Angeles, seeks to document riders’ history and commitment to their communities.

A desire to educate the broader culture about the lowrider community and Chicano culture is partly what prompted LALC member Edward Villa of La Puente, California, to host car shows for his city. Mr. Villa, president of the Veteranos Car Club, has hosted car shows for 15 years. He approached the city a few years ago because he wanted to bring Latino heritage to the city’s car show,  which featured hot rods and other classic cars, but few lowriders.

The shows he helped to curate ballooned from about 40 cars into one that now showcases hundreds of cars. On Halloween, 200 cars arrived for the city of Montebello’s Trunk n’ Treat. LALC served on the planning committee for the event, which was organized by the National Latino Peace Officers Association and the mayor pro tem of Montebello, Kimberly Ann Cobos-Cawthorne. Costumed kids and their families drove through the parking lot at the Shops at Montebello to receive candy and to view lowriders’ cars, which were decorated for the occasion.

Mr. Villa’s and other members’ altruism is motivated by their commitment to la comunidad and a desire to dispel myths about lowriders: “I want the different cities to realize that we’re positive. We’re just trying to bring the love for the cars,” Mr. Villa says. “We just want to show that we have a lot of love for our community.”

A history of social justice

Dr. Sandoval notes that community activism within the lowrider culture dates back to the 1960s. She says that during the civil rights movement, “lowriders were empowered to take pride in their community, fighting for social justice and using their culture not just to represent positivity, but to give back.”

She credits the Dukes – LA’s oldest car club, which started in 1962 – for being the first car club to embrace community activism; members organized car shows that benefited Cesar Chavez and the United Farm Workers movement to improve the conditions of agricultural workers.

Dr. Sandoval laments that so much of this history is unknown. She says lowriding emerged from the hot rod culture established in the ’30s and ’40s in Southern California. While “hot-rodders” preferred to ride fast and furiously, lowriders – who emerged shortly after – preferred to drive “low and slow,” so they could be seen sporting nice cars and brown skin. It was important to be seen representing their families and neighborhoods.

This pride is on display most weekends, as unofficial cultural parades roll through Whittier Boulevard – not to mention the numerous neighborhoods throughout greater Los Angeles. It’s quite the spot: The boulevard provides the venue, the neighborhood provides the crowd, the cars and their drivers are the main attractions, and the shop owners and street vendors cater to them all. Marco Antonio Villalobos, whose East Los Boy Apparel shop is a community staple and popular tourist spot, says that celebrities often come by to check out the scene. “Mario Lopez is always here!” he brags.

LALC’s goal is to continue to host events that highlight and enhance the larger community. “We’re not going to stop,” Johnny Torres says. “We’re going to take this culture into schools, into museums, into the mainstream.” Mr. Ramirez hopes his children preserve the lowriding lifestyle and tradition when they’re old enough to drive. For him, it’s all about la familia: “[Lowriding] is the only thing I can do to show my kids I was doing something good – a small little legacy I can give them.