Because of the open nature of Hinduism, it has often been defined as a way of life rather than a religion. People from all over India practice Hinduism in different forms, with a few key aspects in common.

One such key aspect is the idea of karma. Karma is the belief that everything you do in life will someday come around to you, whether it is good or bad. This belief ties into the idea of reincarnation, which is the cycle of birth and death (called samsara in Hinduism). In Hinduism, things and people don’t die; they simply come back to earth in a different form, which is dependent on their karma. The goal is to someday break out of this cycle, and reach the highest form of spirituality. The breaking of the cycle of birth and re-birth is called moksha. Once moksha has been attained, the cycle of birth and re-birth can end, and one’s individual soul (atman) can join with the universal soul (Brahman). 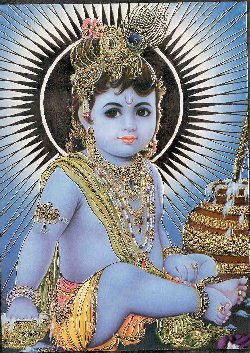 There are three main gods in Hinduism: Brahma, the Creator; Vishnu, the Preserver; and Shiva, the Destroyer. Often, these gods are seen with their goddess counterparts, and each has a huge number of avatars, or forms, on earth. One such famous avatar of Vishnu is Krishna, one of the most beloved gods of Hinduism.

Krishna is one of the most beloved figures in the Hindu religion. Called by many names, he represents love, wisdom, and many other ideals of Hinduism. Though he is immortal, Krishna, an avatar, or embodiment, of Lord Vishnu, was born and raised on earth. Lord Vishnu is one of the three major gods of Hinduism and is called "The Preserver" of life. Krishna embodies him on earth. Krishna was often mischevious and got into trouble as a youth, but was loved and admired by all.

Krishna figures greatly in the Hindu scripture "The Bhagavad-Gita," which means "Song of the Blessed Lord." This book tells the story of Arjuna, a great prince, who is in the midst of a terrible war. Krishna counsels him on many matters and helps him think with a clear mind. He speaks to Arjuna about his karma, or divine duty, and that Arjuna should not be sad when someone is killed because through reincarnation they will be reborn someday. Both of these ideas are facets of Hinduism.

Another beautiful story is that of Krishna and Radha, a story which immortalizes love. Krishna, who plays the flute and is often pictured with it, used to tease the milkmaids, or gopis. However, it was Radha that he loved the best of all.

A very famous Hindu was Mahatma Gandhi, who used the Hindu philosophy of ahimsa, or non-violence, to lead the Indian struggle for independence. Gandhi was also a vegetarian, which goes with the idea of non-violence. In Hinduism, the cow is considered a sacred being because it gives so much to humans; for instance, it produces milk which is essential for nourishment, and is a gentle animal. That is why many Hindus do not eat beef.

Hinduism also teaches meditation, and Yoga is a common form of reaching a peaceful state of mind. Yoga teaches both discipline for the body and for the mind through stretching, postures, and breathing techniques. These help to clear the mind. Another way to meditate is called puja, which is worship. Pujas are performed differently in every region of India, and can include singing hymns from the Bhagavad-Gita. Often, idols are draped in flowers and food is placed in front of them to symbolize their taking nourishment from the faith of the devotee.

Mahatma Gandhi - A recent world leader who based his beliefs on Hinduist philosophy.

Visit these other My Hero stories about the history of religion and religious figures: 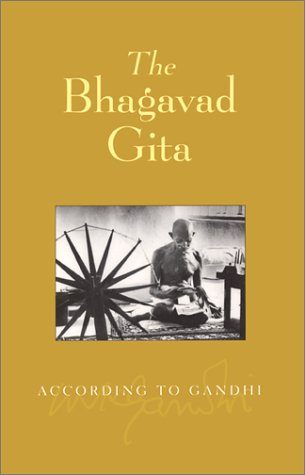 Science of Being and Art of Living: Transcendental Meditation
Maharishi Mahesh Yogi