by Hannah from Fredericksburg

I envision a hero who is an underdog, who does something new and interesting, and continues to do worthwhile things with her life afterwards. Libby Riddles is this kind of hero. She was the first woman to win the Iditarod dogsled race in Alaska. Now, her business card has printed on it: "Musher, Author, Speaker."

Elizabeth "Libby" Riddles says she wasn't particularly interested in dogsled racing, but that she "always wanted to have a lot of animals." She thinks that a great way for children to end up with a job that they love is to do a lot of things when they're young, and try to learn and have experiences. They don't necessarily have to have a job in mind when they do all this, because once they begin to realize the areas they enjoy, they can go in that direction and will probably end up happy.

Libby Riddles didn't begin her life knowing she wanted to race dogs, but she has competed in the Iditarod six times. When she moved to Alaska around the age of 17, she saw dog racing. For two years, she enjoyed having dogs just for the sake of having them; with them she just worked and played. However, in 1978, she entered into a race and won. Soon, as the Iditarod became part of her life, her career would begin in earnest. By 1980, Libby was in her first Iditarod race using a lead dog that Iditarod participant Rick Swenson gave her, but she got only 18th place. The next year she came in at number 20. However, instead of being content with those standings, she continued to practice, bettering herself in the field of dogsled racing. When she and a man named Joe Garnie met up, they created a new pack and switched off using it every year for the Iditarod competition.

When Riddles won the race in 1985, she was more like a native than a tourist. In the NASA sponsored chat, Riddles said, "I lived in an Eskimo village for 6 years when I won the Iditarod, and used their type of clothing and food." I find it admirable that she lived in a new and different place, and could become part of it.

During the NASA chat, when asked whether it was hard to be a woman participant in the race, Riddles responded, "Not really. There had been women in the Iditarod for ten years when I ran it. Also, Alaska is the kind of place where everybody, men and women, have to prove themselves." Even though Riddles was not the first woman to enter, she was the first to win.

Even though she now has this title, Riddles continues to do things that are worthwhile. She has written three books, two of which are directed at a younger age bracket. The reason this means something to me is that I think it's important for heroes to care about interacting with children.

Riddles is very upfront and confident, if not especially friendly. We all have our different personalities, and it doesn't have to be her personality that I admire. Along with her dogsledding accomplishments, I am impressed by the things in Riddles' life that don't have to do with bringing her fame. For example, although she would admit that it was very difficult, I think it's admirable that in Libby's career she had to save her money and work hard to get her dogs ready for the Iditarod. She worked very hard physically during the Iditarod race and she took care of herself by stretching, biking, and swimming. I think highly of her work ethic: It's notable that she was prepared for her athletic feats and took care of her body in this way. Libby Riddles is my hero because of her dogsledding accomplishments, and because of the way she led her life to get ready for them.

The Official Libby Riddles Homepage - a great reference and biography
iditarod.com - all about the race that made Libby famous
dogsledding 101 - learn a little about dog sledding 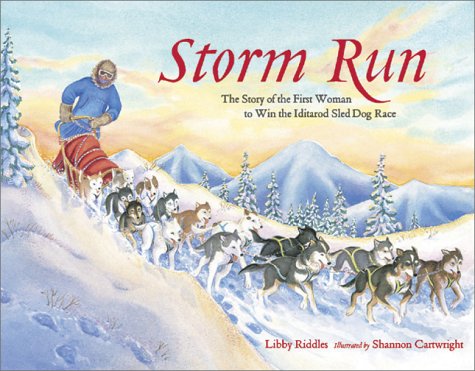