The Foundation for the Contemporary Family presents the Relationships First Award at the annual MY HERO Film Festival, honoring short films that depict in innovative ways the powerful and poignant connections in any type of contemporary family relationship. This year the award goes to Daniel Roy for his film, I Have Four Parents.

Born and raised in San Francisco, Daniel was firmly bitten by the magic bug at the age of 10. Since then, he has appeared at the world-famous Hollywood Magic Castle, been featured in the Philadelphia Inquirer, and has appeared on Penn & Teller: Fool Us on National TV! His audiences have included Fortune 500 Companies, Hollywood actors, and members of the U.S. Congress. In 2019, he became one of the youngest magicians ever to receive the Milbourne Christopher award for Close-Up Magician of the Year. He currently resides in New York City and performs at events all across the United States.

Said Daniel of his film: “This video is a magical rendition of the story of my very unique four-parent family. Everything I talk about in the video is true, and these are the answers to the questions I most commonly get asked. Feel free to ask more questions in the comments section, but please be respectful. Basically, I have four parents: two moms and two dads. They're not divorced and I'm not adopted. My dads are gay and my moms are lesbian. The two couples had been friends for many years and then decided to have and co-parent a kid: me! Regarding the trick, it is descended from a routine commonly called Sam the Bellhop. The earliest version of a storytelling trick seems to come from the routine "The Queens Digging for Diamonds" in Professor Hoffman's "Tricks with Cards" published in 1889. Jean Hugard and Eric Mead have also made important contributions to this plot.”

Dr Judith Anderson, psychologist and MY HERO board member, presented Daniel with the Foundation of Contemporary Family Relationship’s First award at the 17th MY HERO International Film Festival and stated: “We have always chosen films that focus on the power and poignancy of relationships and human connections. The essence of your film captivated exactly what we were looking for – to influence, to educate and to challenge stereotypes in a fun way and the idea of using magic so cleverly to illustrate this unique variation of a contemporary family configuration…you really achieved your goal to show that family is a place of love and acceptance.”

Said Daniel, “It is a huge honor to be nominated and to be selected for this category. I feel a deep sense of gratitude to you and to everyone who is working on the MY HERO Project.” 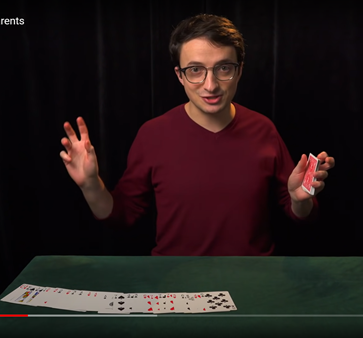 Daniel specializes in two areas of magic Sleight-of-Hand and Sleight-of-Mind. According to his website, ‘Daniel studied the psychology of deception while completing his degree in Neurobiology at the University of Pennsylvania — where he has also lectured about the history of magic. Realizing that what the world really needed was more pretend-wizards, not doctors or scientists, he chose to pursue a career in magic.’

The Foundation for the Contemporary Family presents the Relationships First Award, honoring short films that depict in innovative ways the powerful and poignant connections in any type of contemporary family relationship.

The Award comes with cash prizes up to $1,500. The winner will be selected by the Foundation for the Contemporary Family and announced as part of the 18th MY HERO International Film Festival in 2022.

For more information go to: /relationships-first-award