Fighting Through Adversity: How Malala Yousafzai is a Hero

To be a hero, one does not need to possess superhuman strength or anything out of the ordinary. Instead, they only need to put work into a cause they wish to benefit, or help people using their experience or knowledge. Malala Yousafzai is truly a hero due to her taking advantage of her access to education, performing selfless deeds, and growing from challenges to gain the courage to stand up for women in a world filled with restrictive patriarchy. She empowered countless young girls to not conform to how society wants them to be. Through all of her experiences, Malala grew from each hardship and used it to help her community and others. She has been praised for her calm and peaceful demeanor on numerous occasions because for being so young, she has acted maturely and took on these spectacular heroic qualities. From her childhood to her adulthood, she has used each experience she has faced to become one of the best female activists of all time, and became the youngest person to win a Nobel Peace Prize. 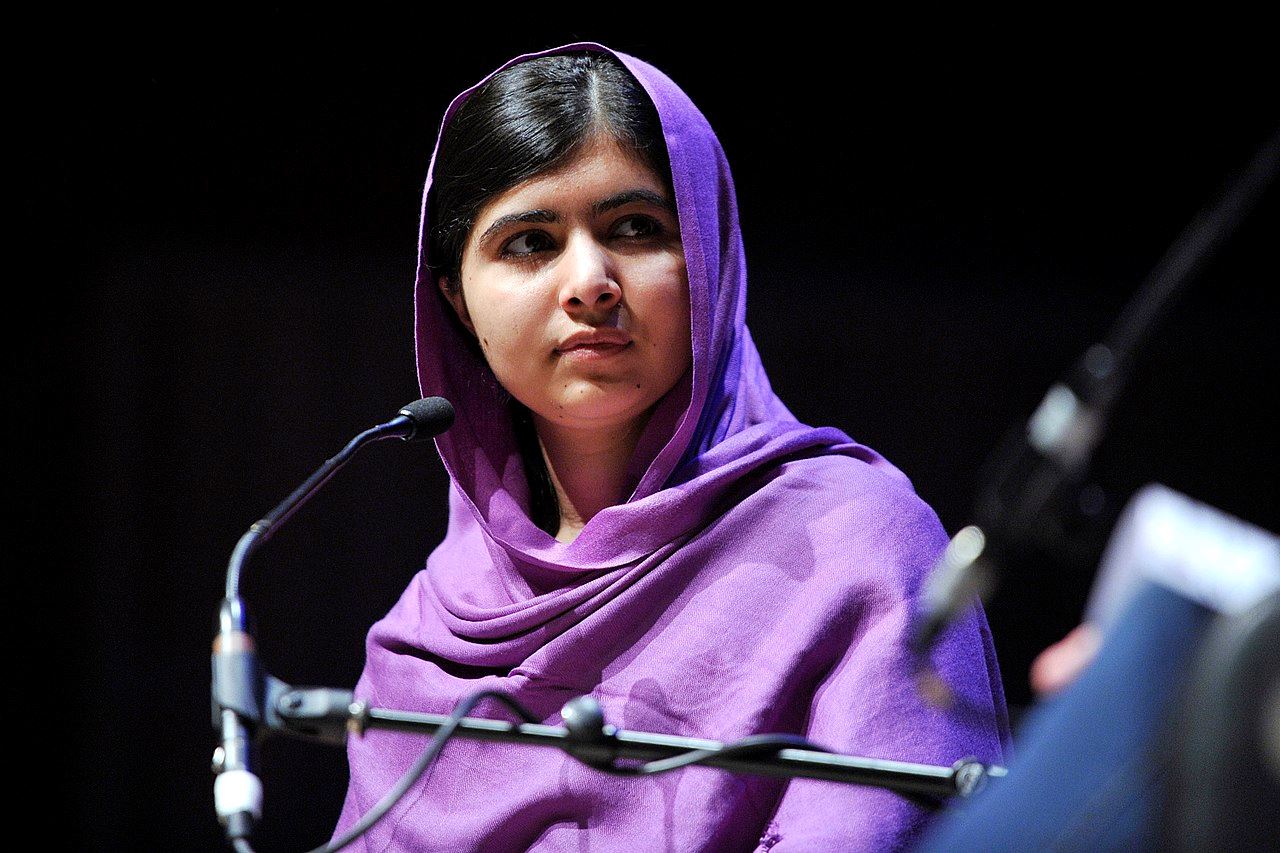 Malala giving speech at women conference Centre, Southbank. “Malala Yousafzai.” Flickr, Yahoo!, 8 Mar. 2014, www.flickr.com/photos/southbankcentre/13008430294/.A hero quite often takes the experiences of their childhood to shape their responses to certain situations as well as to shape what they stand for. Malala has taken these childhood experiences and expanded her knowledge to provide an intelligent outlook on her cause. It all began when she was born in 1997 in a small village in Pakistan called Mingora. Communities like Mignora are very patriarchal, and the birth of a girl didn't cause much celebration or joy to most families. Her father, a teacher of a girls' school, wasn't like the other men in this society, for he had hope for the girls in his town and didn't look down to them as illegitimate beings. Through her father's careful teachings and his inspiration for her to be a strong woman, Malala grew curious and started to notice key aspects about her community that she wanted to change. As she matured, she noticed the different privileges men had that women did not and began to collect information indirectly to build up an argument for women that she would present in the future (Yousafzai).

Leaders and heroes usually begin their journey after they face a challenging or moving event that they want to change. Through activism and confidence, people like Malala Yousafzai could overcome these tests of character and pursue their passions through drawing attention to the problem they wish to fix. In 2008, Mingora sent out a set of rules enforced by the Taliban, an extremist group, who took over the village. These rules included being prohibited to own a television, listening to music, or girls going to school. Each of these rules were enforced strongly and with cruel punishments. "In January 2008 when I was 11 years old, I said goodbye to my classmates, not knowing when — if ever — I would see them again" (“Malala's Story: Malala Fund.”). This feeling prompted her to speak out against the Taliban. She began a blog with BBC speaking out for women under a male name. Her confidence grew from that point as she began speaking to larger audiences and had some presentations in person without covering up her name. With this confidence, she faced immediate consequences. The Taliban found out about her speaking and sent out numerous death threats. These threats didn't seem to phase Malala, for she kept going and kept trying to get her views out to the community. This admirable sense of courage and confidence is an example of something everyone should have and look up to. Malala was so young and facing different dangers, yet she was still persisting, without knowing what was to come (Kettler).

Courage has gotten Malala through the biggest struggle she faced. When she finally got the courage and confidence to start speaking on women's rights to education and equality, the Taliban wanted to retaliate quickly. Because the community thought that the Taliban wouldn't harm a child, there were no extra precautions taken for Malala's safety. When a member of this extremist group boarded a bus she was on and fired a bullet into her skull, the world knew shortly. No one knew whether she would make it and she was transferred to and from many hospitals. Her impact across the world already hit a great number of people, and when people heard about what had happened, the prayers and wishes of good health were sent to her in hopes that she would survive. With the worldwide outbreak of sympathies and the amount of times she then appeared on all types of media, her impact was now growing. She woke up after many different surgeries, thankful for her life, and knew that surviving this event was a sign that her journey wasn't over yet. She stood strong and courageous through her healing and was already prepared to get right back out in public and pursue the same activism, as well as carry on her own education (Yousafzai).

Yousafzai talking with former President Barack ObamaHouse, Obama White. “P101113PS-1119.” Flickr, Yahoo!, 11 Oct. 2013, www.flickr.com/photos/obamawhitehouse/10216265403/.Once she recovered, she won worldwide fame and support for both the cause she was fighting for and the traumatic events she went through. Everyone looked up to her and admired her strive to keep going and the amount of courage it took to not appear afraid of what she dealt with in the past. From then on she has attended meetings with peace groups, including one of the most famous and well respected, the United Nations. She also became the youngest person to ever receive a Nobel Peace Prize, an honor that is challenging to win and is immensely revered. Through her entire experience, she has not only gained a great following of leaders both, young and old, but she has also taken her courage, confidence, and intelligence to lead the heroic lifestyle she is praised for today.

Yousafzai, Malala, and Patricia McCormick. Malala: the Girl Who Stood up for Education and Changed the World. Indigo, 2014.

International Day of the Girl | October 11