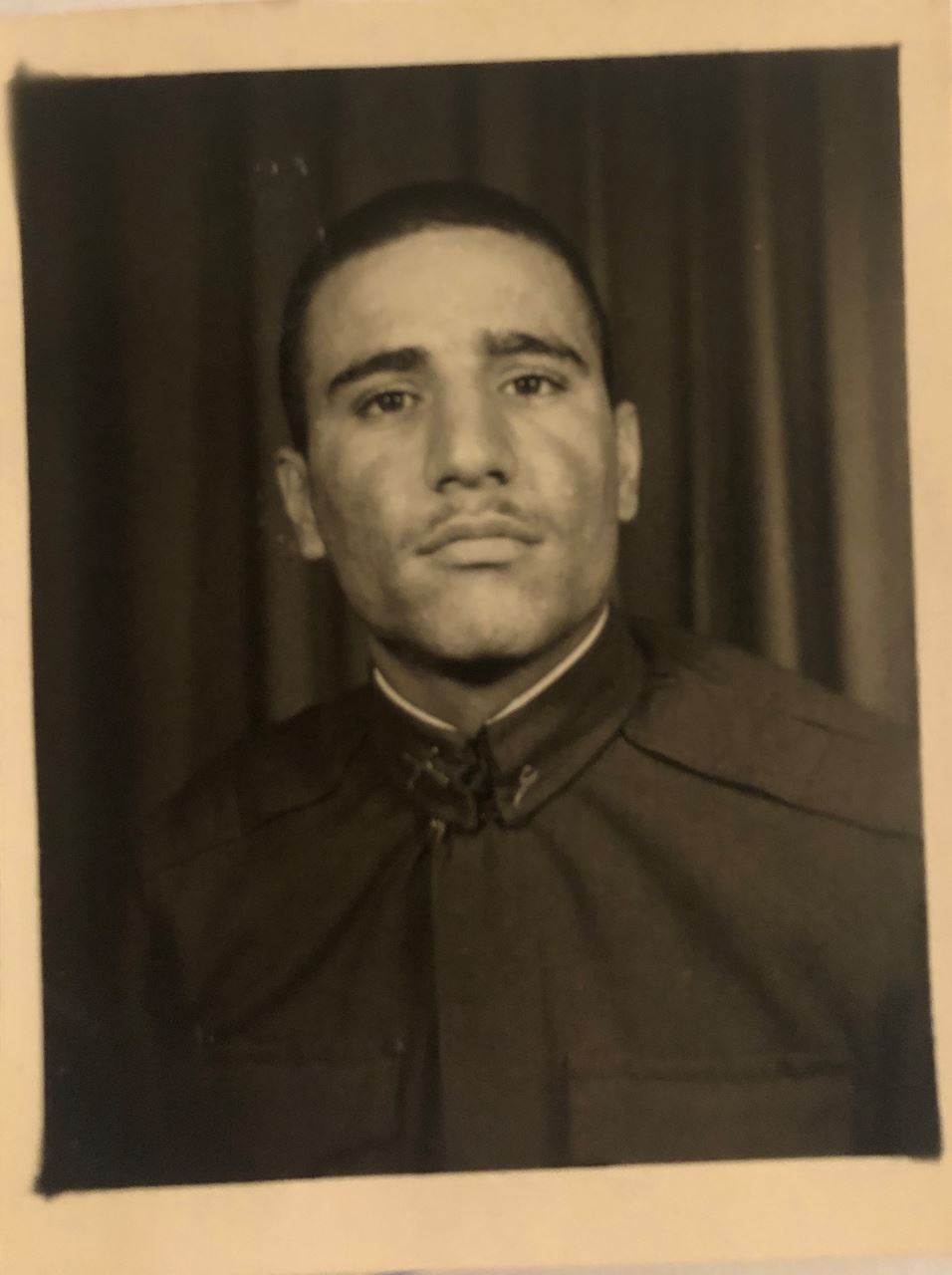 Portrait of Mansour Azimipour in his early 20sPersonal Photo Album of Mansour AzimipourThe definition of a hero as stated by the Merriam-Webster Dictionary is "a person admired for their achievements or noble qualities." The day my English class was assigned an essay about a figure who fits that mold for us, I immediately knew my choice: my father. Mansour Azimipour truly embodies everything I believe to be a hero. To understand how he developed these heroic qualities, one has to understand his past. My father was born in Isfahan, Iran, into a very large family of ten brothers and sisters. Though money was tight for his family, he was grateful to get an education and enjoyed his life, effectively splitting his time between recreation and schoolwork. As my father grew, he became something different from the people around him. He saw the corruption taking hold in the place he grew up and loved so dearly. At that point, he decided to use the best parts of himself to change the course of his life. This journey led him to the place where my family is today, America. My father, Mansour Azimipour, is the epitome of a hero in my eyes, exhibiting the traits of resourcefulness, selflessness, and determination.

My father's resourcefulness became apparent at the young age of nine when he dove headfirst into aiding his family. When I spoke to him, he stressed the fact that as a kid he couldn't sit still when he knew there were things to be done. He used his resourcefulness to fulfill his constant desire to help his family, in this case monetarily. As he likes to say, he started his first business as a little kid selling firecrackers in the streets of Isfahan. He would buy them from a convenience store in bulk, lowering the price per unit, and he would commission teenagers (sometimes twice his age) to sell them while reaping the profits. No matter the dangers, he was willing to do what it took to help his family. He continued this for many years eventually broadening to sell other things like gum and trinkets. When I try to put into perspective just how monumental this act was for a nine-year-old, I look back to the lack of work I was doing at that age. This story is one of my favorites that he tells because it shows his inventive nature started early and on a large scale. I see those larger implementations still to this day in his business endeavors. A hero and their noble traits are not always shown exclusively during hard times or big moments. My mother has been out of town visiting her parents in Iran the past couple of weeks, so my father has taken over her role. Every night he comes home from a long day of work and tries his best to make food out of the things we have in the refrigerator, even though he isn't a great cook, and often there is not much to work with because we neglect going shopping. His ability to implement his resourcefulness into his daily life is admirable. The trait of being resourceful is a heroic trait to me because it is essential to daily success. Success in life comes to those with the ability to adapt and use what is available to the best of their ability. 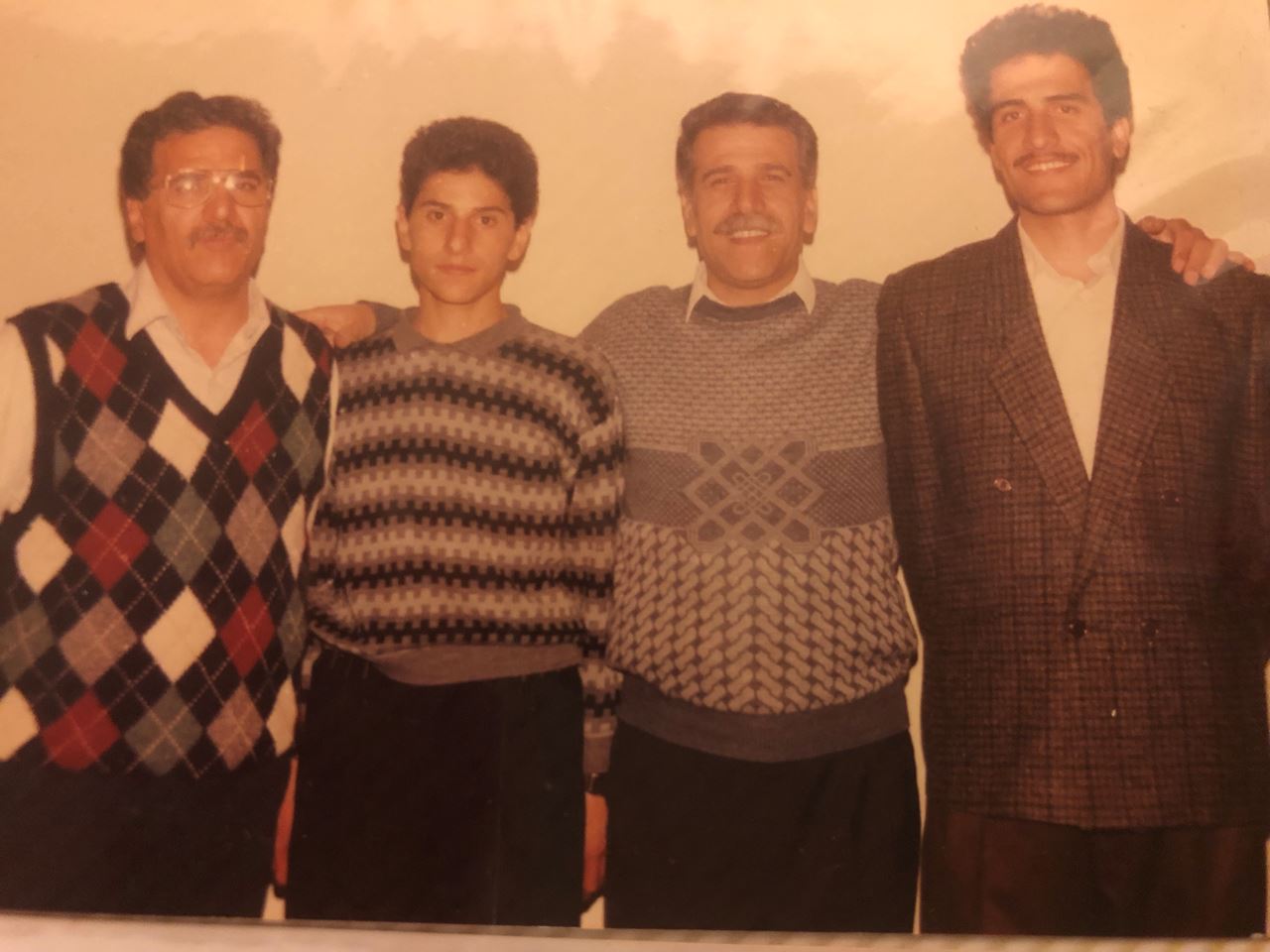 Mansour Azimipour and three of his brothers Mamad, Ali, and MostafaPersonal Photo Album of Mansour Azimipour My father is selfless, and everyone around him notices, whether they’ve known him for minutes or years. Having nine siblings means that there is quite a range in ages, so my father has siblings quite a few years older than him and quite a few years younger. His father, though he was a hardworking man, did not have the best job to support such an expansive family, as he was working long hours for measly pay. My father is the third oldest, and when he was twelve his two older siblings went off to college. With his brother and sister gone, he became the oldest, and the one responsible for taking care of the family in his father's absence. He not only took on the tasks of daily life: helping cook, dressing, and transporting his siblings, but also getting jobs to ease the financial situation. It was one of many selfless acts, giving up his life for his family. For that reason, selflessness is his second heroic trait. When my grandfather died, my father was twenty-nine years old, with siblings as young as six. Once again, he chose to become the head of the family no matter the impact that had on his ongoing education. When I talked to my aunt recently, she expressed how much it meant to her to have someone there for her in that hard time. This trait, like the first one, can be exhibited both in large ways and in everyday life. Later in my father's life, when my sister and I were in primary school, a recession hit the housing market where he works. He never showed us his fear. He gave up any extravagances so that my sister and I could have the best of everything, insisting he "had all that he could ever need." That constant exhibition of selflessness has inspired me throughout my life, and it is something I hope I can develop as I grow as a person. 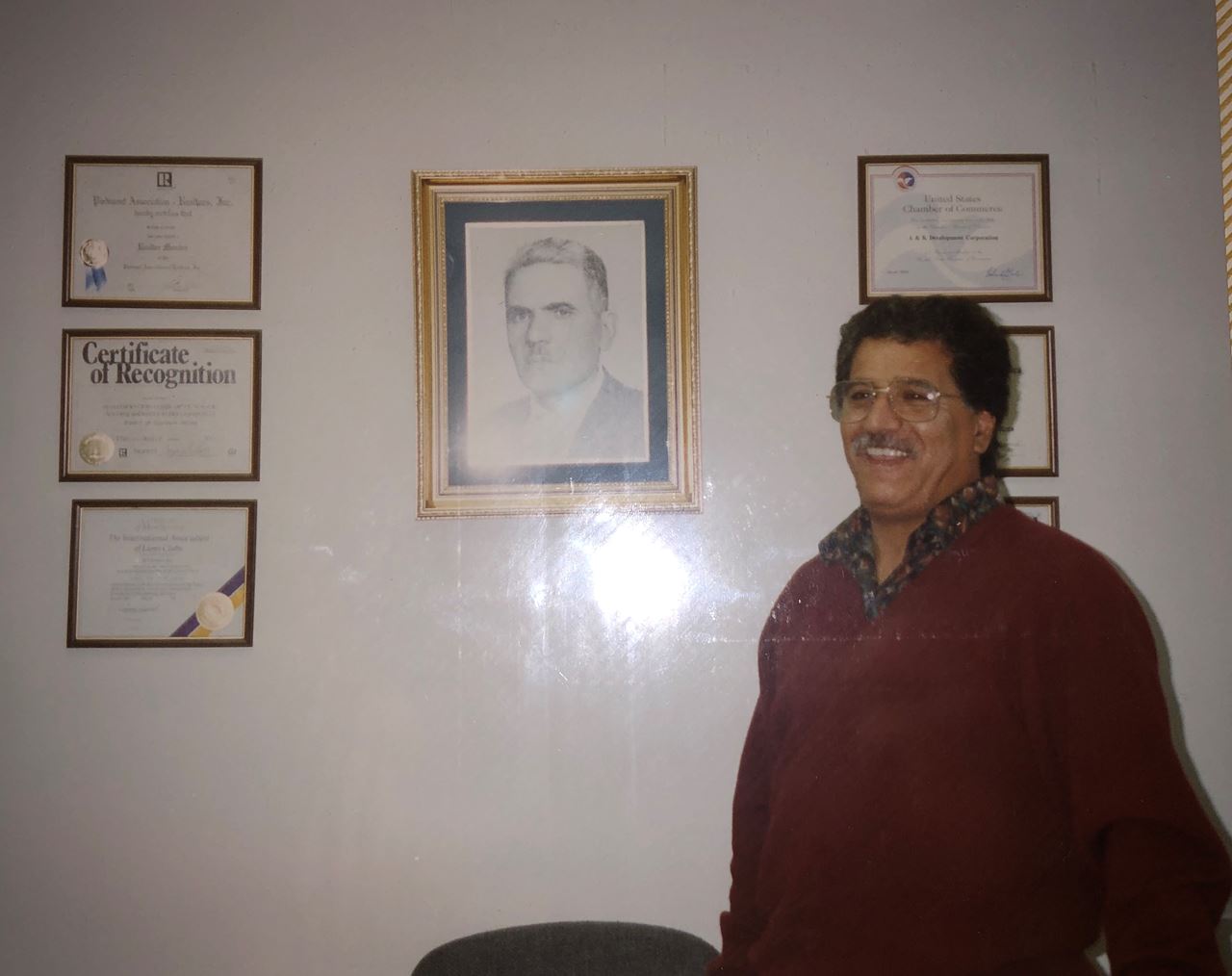 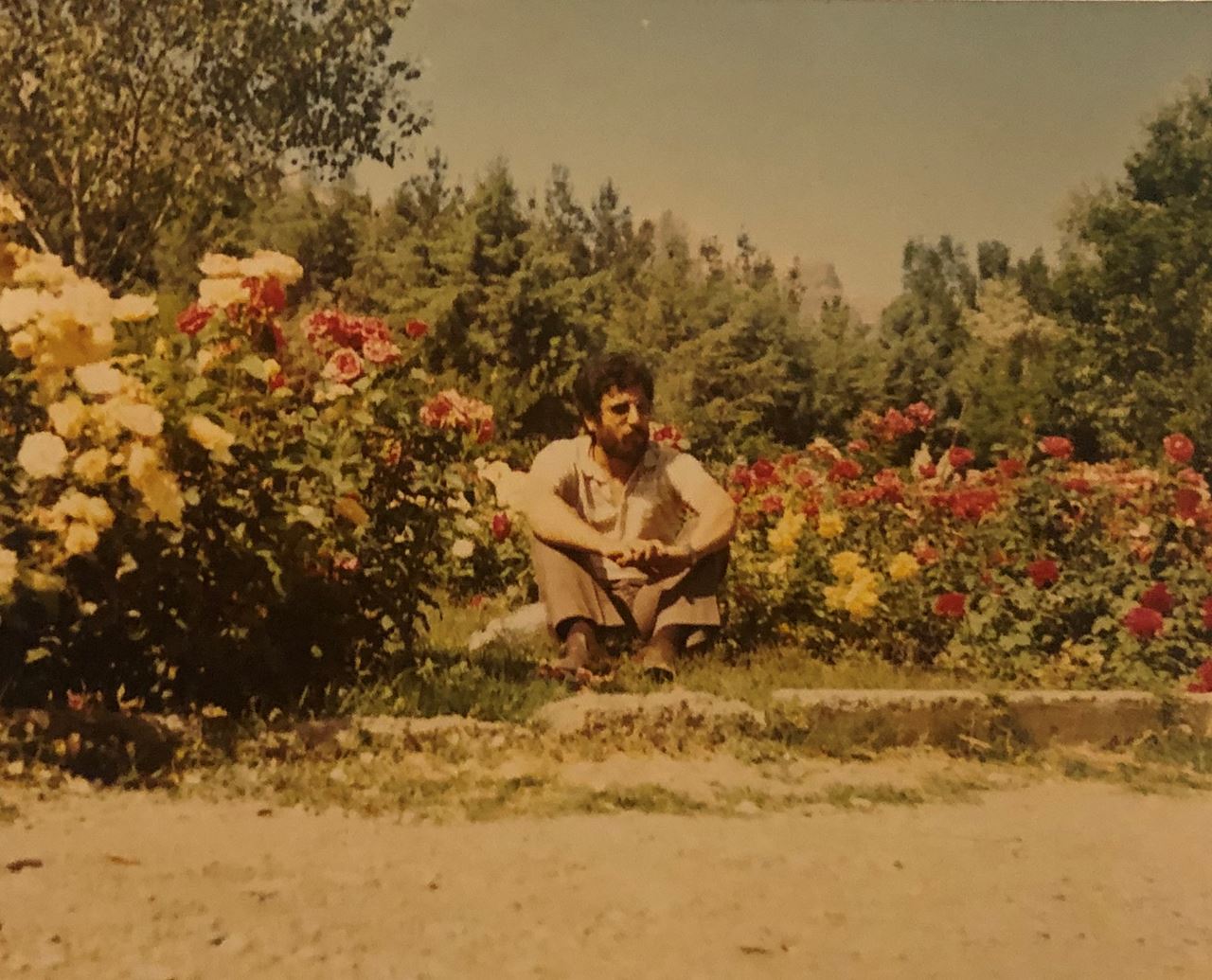 Mansour Azimipour during his college time in the flower fields of LondonPersonal Photo Album of Mansour AzimipourDetermination is the one trait that has most drastically changed the course of my father's life. He was born in Iran as every one of his ancestors was, but he was different. He had a mindset that he could leave that faltering country. From a young age, he worked hard so that his children could live in America with better conditions than he had. His sheer determination, whether that was working for a dollar an hour in a London restaurant to pay for his college tuition or coming to Virginia with only a thousand dollars in savings, allowed him to achieve this better life. My uncle, his older brother, always tells me that is what he admires most in him: the determination to do what his other siblings could not. In 1985 my father's dreams came to fruition; he moved to America in a time when he described Iran as a place where "there was no room for honest work." Along with his day job, my father would go to night school to learn American history, culture, and language with hopes of better assimilation. He always had a big dream to start a business and to be his own boss, and he expressed that. People doubted him but he disregarded them saying he could do anything he put his mind to, an anecdote he says to this day. Now he has created over five companies, an office building, two subdivisions, and much more. When I talked to him about writing this essay and asked him about his life, he told me, "I consider myself a living symbol of the American dream." The idea of the American dream is finding a better life through hard work and willpower in a place that allows you to prosper. My father has taken full advantage of that. When learning about the years of the move, I decided to ask my mom what she remembered because she was by his side. She told me how she could see the determination in his eyes to work and provide. I admire that in him, that he will do anything for the people that he loves. I hope to have an ounce of that determination when pursuing endeavors later in my life, for that I believe is the key to reaching one's goals.

My father is an immigrant in America, a man born into a situation that seemed to have an inevitable destiny. But, like many others, he overcame that hurdle and broke what was set before him to create a better life. His story can inspire those who want to reach a better place than where they were born, whether that is physically like my father or mentally. My father could be a role model to all because he is the epitome of a well-rounded, everyday man. His story can inspire others because everyone can see a part of themselves in him, they can understand the want to do better for yourself and your family. No matter who you are, there is something you can learn from everyday heroes you encounter in your life; everyone has that person they long to be like. For each person, having that role model makes becoming the most heroic version of yourself seem much more attainable. I encourage every person to try and find someone who is what my father is to me, for it will greatly impact how they go about their lives.