by Staff from United States

Courage is like — it’s a habitus, a habit, a virtue: you get it by courageous acts. It’s like you learn to swim by swimming. You learn courage by couraging.

Marie M. Daly was born April 16, 1921 in the Corona neighborhood of Queens, New York. She broke boundaries by becoming the first Black American woman in the United States to earn a Ph.D. in chemistry. She established a scholarship in her father's honor to support African American students studying medicine and science. 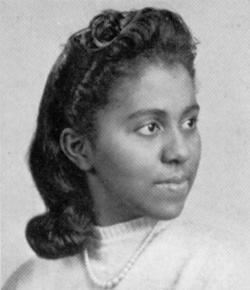 Marie Maynard DalyQueens College Silhouette Yearbook [Public domain], via Wikimedia CommonsShe became inspired to become a scientist by reading in her grandparents' library. In the library, she found a classic book called The Microbe Hunters, by Paul de Kruif. The Microbe Hunters tells the story of the scientists who discovered microbes (microscopic organisms that are too small to be seen with the eyes, especially bacteria). Why is the study of microbes important? The study of microbes led to vaccines. Vaccines, which are often made from weakened forms of bacteria, immunize our bodies against disease. For example, the scientist Louis Pasteur, created a vaccine against rabies.

Daly's father also studied chemistry, but was unable to finish his studies because of a lack of money. Marie went to an all-girls' school in high school. She was encouraged to pursue her love for chemistry and went to college at Queens College, where she got her degree in chemistry. She then went on to complete her master's degree at New York University in a year, and her PhD at Columbia College in three years. She taught at Howard University, a historically black college, before doing her post-doctoral research at Rockefeller Center where she studied the cell nucleus.

Daly was a biochemist--studying chemical processes in living organisms. As you can imagine, her work explored how what we eat affects the health of our heart and circulation. Her research on proteins helped Watson and Crick in their explanation of DNA (for which they won the Nobel Prize). In addition to proteins, she researched cholesterol and its relation to hypertension, as well as uptake of creatine by muscles.

Biography of Marie Maynard Daly - From the Science History Institute
Rosalind Elsie Franklin - Her early work contributed to the understanding of the structure of DNA.