by "Friends of the Everglades"

Defender of the Everglades 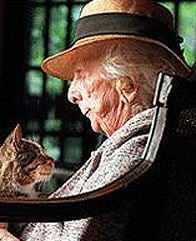 Marjory Stoneman DouglasFriends of the Everglades [CC BY-SA 3.0 (http://creativecommons.org/licenses/by-sa/3.0/)]"There are no other Everglades in the world. They are, they have always been, one of the unique regions of the earth; remote, never wholly known. Nothing anywhere else is like them..."

These opening words from Marjory Stoneman Douglas' immortal book Everglades: River of Grass crystallize the uniqueness of the Everglades. These words could also be used to describe Marjory herself, who is as rare and unique as the Everglades she has worked so hard to protect.

Marjory Stoneman Douglas, born April 7, 1890 in Minneapolis, Minnesota, graduated from Wellesley with straight A's with the elected honor of "Class Orator." That title proved to be prophetic.

In 1915, following a brief and calamitous marriage, she arrived in Miami, working for her father at the Miami Herald. She worked first as a society reporter, then as an editorial page columnist, and later established herself as a writer of note. Here she took on the fight for feminism, racial justice, and conservation long before these causes became popular.

She was ahead of her time in recognizing her need for independence and solitude, yet never considered herself entirely a feminist, saying: "I'd like to hear less talk about men and women and more talk about citizens."

Her book, The Everglades: River of Grass, published in 1947 -- the year Everglades National Park was established -- has become the definitive description of the natural treasure she fought so hard to protect. After several reprints, the revised edition was published in 1987, to draw attention to the continuing threats -- unresolved -- to "her river."

In the 1950s, the U.S. Army Corps of Engineers rose to the top of her list of enemies. In a major construction program, a complex system of canals, levees, dams, and pump stations was built to provide protection from seasonal flooding to former marsh land -- now being used for agriculture and real estate development. Long before scientists became alarmed about the effects on the natural ecosystems of south Florida, Mrs. Douglas was railing at officials for destroying wetlands, eliminating sheetflow of water, and upsetting the natural cycles upon which the entire system depends. 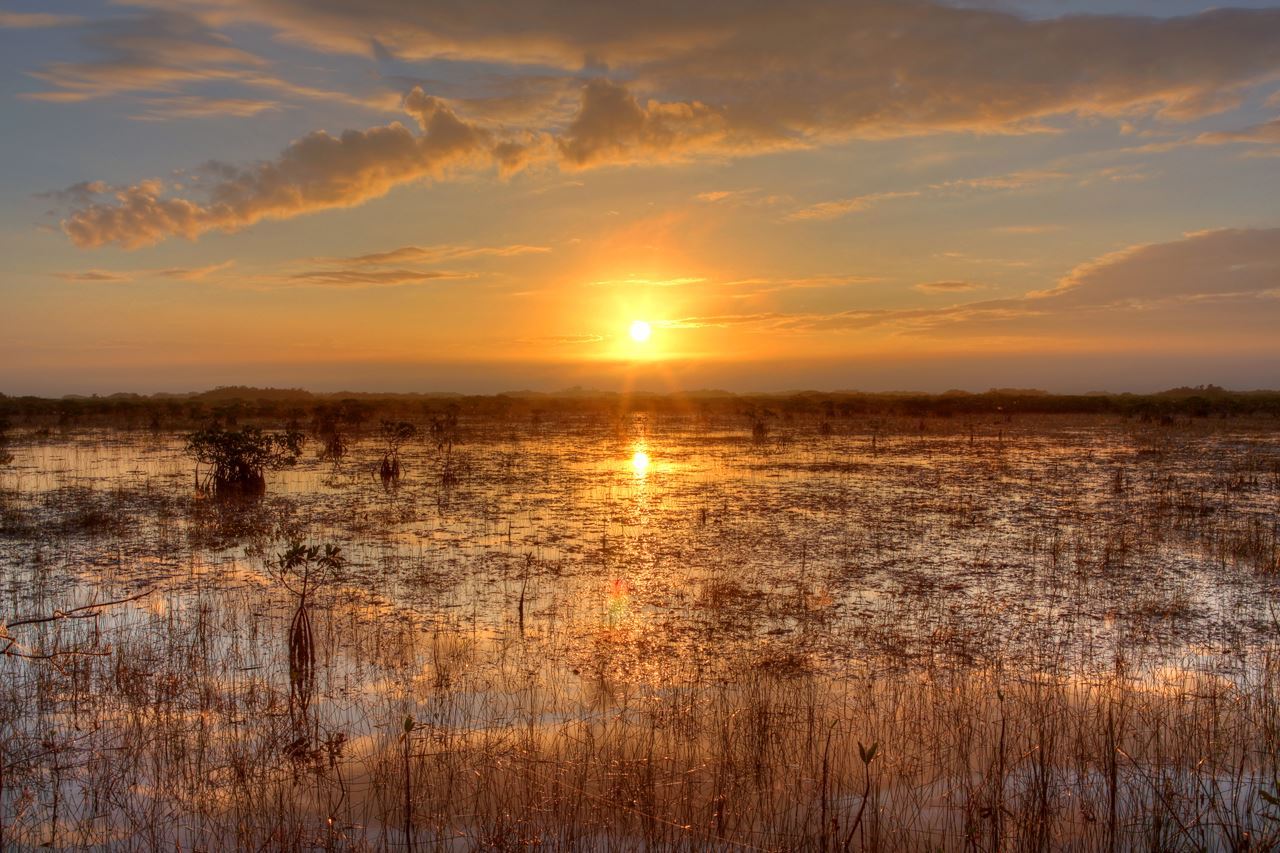 Sunset over the River of Grass, NPSphoto, G.GardnerEverglades NPS from Homestead, Florida, United States [Public domain]Early on, she recognized that the Everglades was a system which depended not only on the flow of water from Lake Okeechobee into the park, but also upon the Kissimmee River which feeds the lake. To add a voting constituency to her efforts, in 1970 she formed the Friends of the Everglades, and until recently remained active at the head of the organization.

In his introduction to her autobiography Voice of the River (1987), John Rothchild describes her appearance in 1973 at a public meeting in Everglades City: "Mrs. Douglas was half the size of her fellow speakers and she wore huge dark glasses, which along with the huge floppy hat made her look like Scarlet O'Hara as played by Igor Stravinsky. When she spoke, everybody stopped slapping [mosquitoes] and more or less came to order. She reminded us all of our responsibility to nature and I don't remember what else. Her voice had the sobering effect of a one-room schoolmarm's. The tone itself seemed to tame the rowdiest of the local stone crabbers, plus the developers, and the lawyers on both sides. I wonder if it didn't also intimidate the mosquitoes. . . . The request for a Corps of Engineers permit was eventually turned down. This was no surprise to those of us who'd heard her speak."

Marjory Stoneman Douglas died in 1998 at the age or 108, her ashes scattered in the Everglades she worked so tirelessly to preserve. Her memorial and legacy will be our preservation of her dream - for us and our children and our children's children.

"Marjory Stoneman Douglas was posthumously inducted into the National Women's Hall of Fame on October 7, 2000. Accepting the induction on her behalf was Friends of the Everglades President, Michael Chenoweth. The following is the text of the statement made by Mr. Chenoweth upon accepting the award: 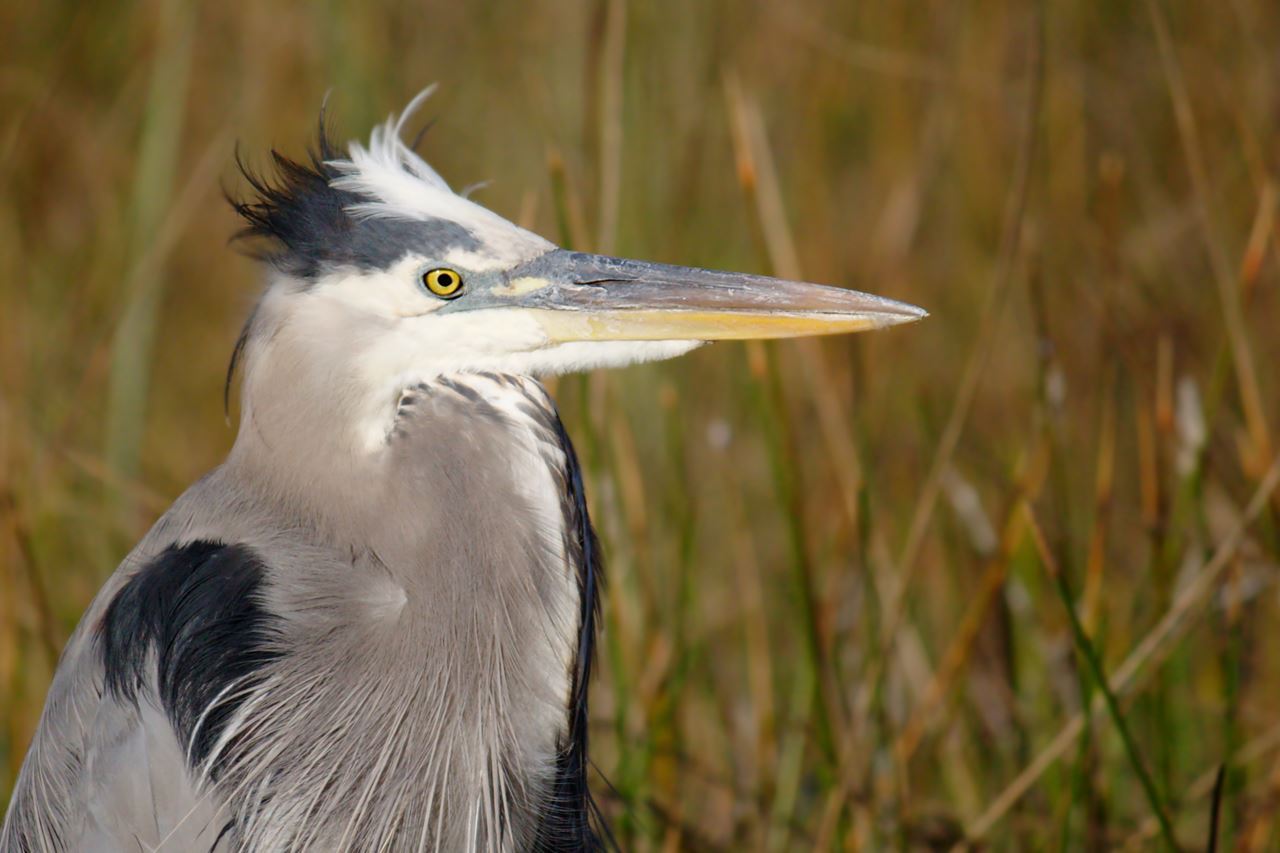 It is a privilege, certainly unique in my life as a man, to have the honor of standing among these great women and accepting this recognition on behalf of my late friend and mentor, Marjory Stoneman Douglas. I am sure that her spirit is watching from her beloved Everglades, and from the hearts of those thousands of children and adults whose lives have been forever changed by reading her book, The Everglades, River of Grass.

It is a sobering assignment for me to say something appropriate in a couple of minutes about a woman whose efforts on just the Everglades lasted longer than my own lifetime. It is particularly difficult for me, because just recently I have been learning about the amazing array of Marjory's accomplishments unrelated to her work on the Everglades. There is a web site that lists her books, plays and magazine articles and I encourage you to look it up.

Marjory came to Miami in 1915 and almost immediately went to work for her father, who was at that time publishing the newspaper that would in later years become the Miami Herald. Calling on her early education, which had included a prize winning story she wrote at the age of 17 years for the Boston Sunday Herald, and her training at Wellesley College, she began writing for the paper.

Her young life included a short adventure in the US Navy. Her father assigned her to write a story about the first woman to join the Navy during World War I. Since there hadn't been any women enlisted until then, she enlisted herself, and presumably wrote about the experience. Following the war, she stayed for some time in France, working with the Red Cross, before returning to Miami.

Marjory often told about the time when she and Mrs. William Jennings Bryan traveled to Tallahassee to lobby the Florida Senate to support the women's suffrage amendment. After telling about that trip, and how the women kept their skirts away from the spittoons, she always joked and laughed about how persuasive she must have been, because Florida was the last state to ratify the amendment.

Sometime after arriving in Miami, Marjory evolved into what can only be described as a prolific writer. Even at the end of her life at the age of 108 years, she was still working on yet another book, a biography of 19th century writer and environmentalist William Hudson, the author of Green Mansions and Idle Days in Patagonia. Her friends still hope to complete that work for her.

In addition to all her written works, Marjory left us the organization that I have the privilege of leading, Friends of the Everglades, which is trying to carry on the work of protecting the Everglades as she would have done. Marjory's love of the out-of-doors still lives in Friends of the Everglades. Recently, Congress has begun to implement the largest ecosystem restoration program in history: to restore the Everglades. Marjory was an early advocate of this effort and we are working hard to insure it is successful.

So on behalf of Marjory and all those who hold Marjory's works and memory in a special kind of reverence, I thank you for this wonderful recognition of her enormous contributions to our nation.'"

Friends of the Everglades - is a non-profit grassroots organization founded by Marjory Stoneman Douglas to protect and restore the Everglades.
Marjory Stoneman Douglas
- This Web site provides an extensive bibliography of books, plays, poetry and articles written by and about Ms. Douglas.
National Women's Hall of Fame Official Website - Marjorie Stoneman Douglas was inducted into the National Women's Hall of Fame in 2000.
Arthur R. Marshall Foundation - is dedicated to educating young people and the public about the Everglades ecosystem.
Everglades National Park - This site is a great resource for students and teachers to learn more about the history and conservation efforts of this International Biosphere Reserve.

Earthkeeper Hero: Marjory Stoneman Douglas by Friends of the Everglades