How do you change hearts and minds to get residents to see themselves as part of the climate solution? Minneapolis is leading the way, one person at a time. This story is part of an occasional Monitor series on “Climate Realities.” 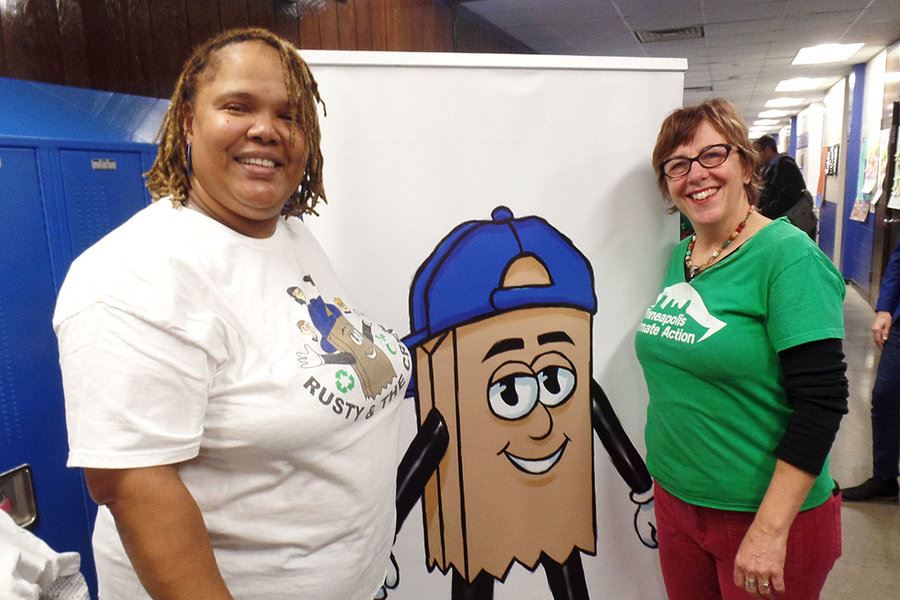 Audua Pugh (left) and Kyle Samejima are active promoting greener lifestyles in Minneapolis. They gathered with other residents at North High School on Nov. 20, 2019, for an event supporting a global “climate reality” campaign.Mark Trumbull/The Christian Science MonitorLast year, the city pledged to transition to 100% renewable electricity by 2030. But city administrators and utilities can’t meet that goal without citizen involvement, says Mr. Havey, the city’s director of sustainability.

“This is going to be really a joint effort,” Mr. Havey tells residents gathered for the neighborhood association meeting. As he asks for their ideas, he encourages them to view the shift not as a sacrifice but as bringing local benefits – in health, jobs, and lower living costs.

The evening’s pitch is part of a larger mission for Mr. Havey: nurturing more sustainable behavior. Even in politically liberal cities like this one, the job of reducing carbon emissions hinges on more than just raising an alarm and setting ambitious goals. As a practical matter, it also means enlisting the public by making the solutions feel achievable and even welcome – not a burden on people’s time and bank accounts.

His efforts have implications nationwide. More than 90 cities around the United States have pledged to wean their electrical grids off fossil fuels, but so far only some relatively small ones have achieved this goal. Getting a city like Minneapolis, with some 425,000 residents, to 100% renewable would set a clear model for other midsize cities to follow.

In Minnesota and beyond, “behavior change is going to have to be part of the solution,” says Debbie Weyl, an energy-use expert at the World Resources Institute in Washington.

Here in Minneapolis, estimated carbon emissions have already dropped 17% since 2006, even as the city’s economy has grown 20%. But that’s just the beginning of a steep course lined with hurdles.

Currently 30% of local electricity supplies come from coal and another 14% from natural gas. Most homes aren’t robustly insulated, even though polar-vortex chills contribute to making buildings the city’s biggest source of emissions. And for many residents, the idea of a car-free lifestyle just doesn’t feel realistic.

So Minneapolis is working on answers, one person at a time.

In South Minneapolis, Erin Tietz says her family’s transition to a green lifestyle hasn’t felt onerous. The roots of this change were planted, almost literally, in the soil of organic waste. As someone with a lifelong love of cooking, Ms. Tietz says citywide efforts to compost food waste changed her thinking about trash – and whether she really needs to use the garbage disposal in her kitchen sink. 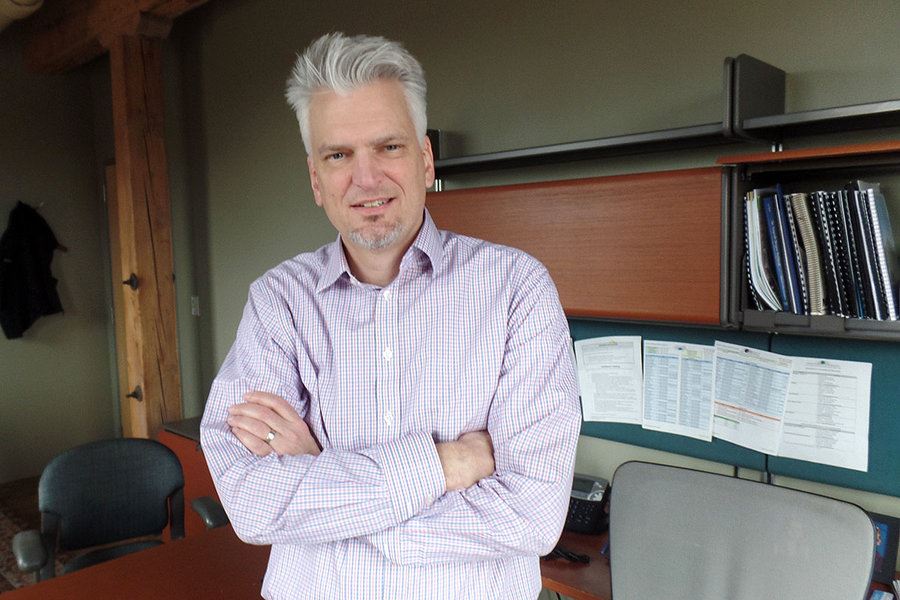 Chris Duffrin is president of the Center for Energy and Environment, a group that promotes energy efficiency and other efforts toward a low-carbon economy. Seen here in CEE's Minneapolis office on Nov. 21, 2019, he says the city's leadership is increasingly engaged in addressing climate change.Mark Trumbull“My interest just continued to peak,” and now, as her kids help with composting at their school, Ms. Tietz says she tries to spread an environmental ethic to others.

Her own family’s steps have ranged from eating less meat to buying foods in bulk.

“I won’t ever take a plastic bag,” she says. “I just transfer [groceries] from the cart to my car if I forget my bags.”

About a year ago, her husband started riding the bus to work. While she feels the need for a personal vehicle for the house calls in her nutrition-related work, Ms. Tietz is pondering a Vespa or similar scooter as a way to burn less fuel.

City officials believe this kind of story can be replicated. City-run sustainability programs can inspire residents to think differently about their own choices at home, says Minneapolis Mayor Jacob Frey, by making it a little easier to make sustainable choices. Adding bus-only lanes, for instance, can further incentivize public transit usage, he says.

“If we can make it easier to take the bus, people will. And it will substantially reduce the carbon output,” Mayor Frey says, adding that in some cases “bus traffic occupies about 3% of the vehicular traffic yet moves almost 50% of people.”

No one expects cars to disappear outright. But with more-frequent and faster-moving buses, public transit could become more enticing.

“The future is going to be less expensive if you’re low carbon – healthier, more convenient, safer,” Mr. Havey says in an interview.

He aims to establish a “mobility hub” within half a mile of each resident. These hubs would combine a bus or light-rail stop with things like rental bikes, scooters, and charging stations for electric vehicles. Ideally, a single app will allow people to browse and pay for various transit options.

Despite recent efforts “the city is still incredibly car-centric,” says Ashwat Narayanan, executive director of Our Streets Minneapolis, an advocacy group focused on transportation issues. “We want to change that and make sure the city is being inclusive of everyone – regardless of income, race,” or other factors.

Similarly, the city’s efforts to transform the carbon footprints of homes may hinge on incentives that affect people’s behavior.

At the meeting with residents, Mr. Havey is pleased when a number of hands go up as he asks whether people have had “home energy squad” visits. With the city’s encouragement, local utilities are offering these voluntary visits as one way to make action as easy as possible for customers. Energy-squad reports outline the savings ratepayers can reap, map a path toward better efficiency, and even provide bids from a couple of contractors.

Still, it’s a minority of “home energy squad” participants who actually follow up by installing new insulation or an efficient furnace. When consumers do make investments, comfort and cost savings drive the discussion more than climate change, says Chris Duffrin, president of the Center for Energy and Environment (CEE), a nonprofit that partners with local utilities to provide the home energy squad assessments.

So the city wants to do more to make the math add up.

To incentivize action, Minneapolis is aiming to become the first major city to call on utilities to offer energy loans tied to a dwelling’s utility bill, rather than being tied to an individual borrower. That way consumers don’t feel they have to sacrifice upfront for a payback that will only materialize if they remain in the house for several years. Instead, the finance charge is offset by a lower monthly tab for power – both showing up on the same bill.

This “inclusionary financing” also means renters as well as homeowners can participate, and an occupant’s credit score won’t be an obstacle.

“The leadership of the city of Minneapolis right now is constantly pushing the envelope on the ideas for how to address climate change,” Mr. Duffrin says.

But in some neighborhoods, the city’s climate campaign is met with mistrust.

“We’re overlooked all the time,” says Audua Pugh, a resident of North Minneapolis. “That’s where more black and brown people live,” she says.

Ms. Pugh founded a group to promote recycling and other environmental progress in her neighborhood, because she says she has learned not to wait for the city to protect her community. Pointing to lead in North High School’s water and air pollution from nearby industrial facilities, she asks, “where’s the follow-up?”

City leaders acknowledge that in Minneapolis, as elsewhere, it’s low-income or African American neighborhoods that are most exposed to the negative effects of climate change and other environmental challenges. They say they’re working to address the challenge, in part by designating less-advantaged areas as “green zones” that qualify for extra assistance.

For her part, Ms. Pugh supports the push for solar panels and efficiency. As to transportation, she sees a shift toward electric vehicles as the most realistic green-transportation option.

“I drive, and I don’t foresee that changing,” she says, referring to the cold winters and a disability that keeps her from walking long distances.

Even with financial incentives, voluntary change alone won’t carry communities like Minneapolis across the finish line of a fully decarbonized economy, says Ms. Weyl of the World Resources Institute. But individual behavior is a vital piece of the puzzle, she says, both in reducing emissions and in proving that green practices can work in real life.

“Political will is really critical,” and those who are early to embrace greener practices “are reassuring everyone that this is possible, this is not punitive.”

Hanna Terwilliger is one of those people. Two years ago she chose to switch her home from gas heat to an air-source heat pump – with assistance from CEE. Her heating system draws warmth from the outdoor air, using some extra electricity to assist in very cold temperatures. She also replaced her gas stove with an electric induction range.

Ms. Terwilliger was motivated in part by climate change. But after feeling her house shake from a deadly gas explosion nearby a few years ago, it was also about safety.

For now, it’s debatable whether her switch does much to reduce carbon emissions. But that will change as the local utility’s energy mix shifts more toward renewables.

“Someone has to be the early adopter,” she says. “If we can do it in Minnesota you can do it anywhere.”