The following chapter of "Women of Distinction: Remarkable in Works and Invincible in Character" by Dr. Lawson A. Scruggs has been generously donated by his granddaughter. Dr. Yvonne Scruggs Leftwich, and her siblings.

In 1893 Dr. Lawson A. Scruggs published a book containing biographies of ninety-one women of African descent whose work resulted in significant contributions to the nation. The book is being published again by his granddaughter, Dr. Yvonne Scruggs Leftwich and her siblings. The book was written before women had the right to vote. Women could not participate in many institutional processes in this democracy and African American women were marginalized even more. In his Preface Dr. Scruggs wrote, “If in such a short time of greatly abridged citizenship our women have accomplished so much, and if many of these heroines mentioned did develop such giant intellects during those dark days of our history, may we not be encouraged to make more diligent, protracted efforts in this brighter age?”

by Dr. Lawson A. Scruggs - Book Excerpt - from Raleigh, NC 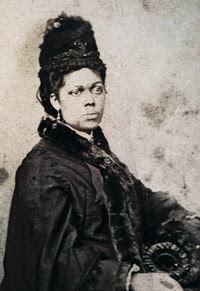 Martha Bailey Briggs was born in New Bedford, Massachusetts, March 31, 1838. She was the only child of John Briggs, of Tiverton, R. I., and Fanny (Bassett) Briggs, of Vineyard Haven, Martha's Vineyard, Massachusetts. Her father is reputed to have been a man of uncommon intelligence for the limited opportunities afforded him. During his early life, like most poor country boys, he was permitted to attend school only during the winter. He was quick to accept and utilize every advantage in the way of learning which presented itself, and thereby acquired a great deal of knowledge. When but twelve years old he went to New Bedford. to live in the family of a Quaker, George Howland, who had two sons—one the age of John Briggs, the other younger. From these boys he obtained much help in his studies, and so faithful to duty did he prove that he was retained in the employ of the Howlands, father and sons, up to the time of his death, which covered a period of more than fifty years. He had an insatiable appetite for reading, was extremely fond of politics, and, being a rampant anti-slavery character, enjoyed the close friendship of Hon. Frederick Douglass during much of his lifetime. His wife having died when his daughter was quite young, he entrusted the rearing of his child to an aunt, Mrs. Bailey, whose motherly care and guidance did much to develop the strong character of the woman whose destiny it was to play so important a part in the education of her race.

Upon his only child Mr. Briggs bestowed every facility for an education which the private and public schools of New Bedford afforded.

At the age of twelve years she was prepared to enter the New Bedford High School. The rules would not allow children under thirteen to enter, and she was compelled to wait for some time before admission could be gained for her. Through the influence of friends she was admitted in September, 1850, when but twelve and a half years old. She completed the course with honors and was the first colored girl graduated from this high school.

Her earliest experience at teaching was at home in her father's house. There she opened a private school with ten or twelve pupils, and at different times had evening pupils, whom she taught to read and write. These evening pupils were most largely men and women who came from slavery. To such fugitives her father, out of the largeness of his heart, often gave refuge and aid. Subsequently she taught at Christiantown, Martha's Vineyard, in the private and public schools of Newport, R. I., and acted as governess in the family of Mr. George T. Downing, of said city, for several years. Because of his loyalty to manhood and justice Mr. Downing repudiated the idea of fastening upon his posterity the notion of their inferiority, by permitting them to submit to attendance upon public schools for colored children, separate and apart from those for white children, when the conditions were such that both teacher-ships and pupils might have been mixed without detriment to either race. He therefore gave the use of one of his houses as a school and paid for the private tuition of his children, Miss Briggs being one of the three teachers employed. She lived with his family and enjoyed their warmest friendship.

In 1859, while teaching at Newport, she was invited by Myrtilla Miner to go to Washington, D. C., and assist her in teaching a school which Miss Miner had established for the education of colored girls. She did not, however, accept the invitation, because her father was not willing that she should brave the bitter feeling existing between the North and South. Miss Miner was thus left to combat her perilous attempt all alone, but victory crowned her efforts, and it was the result of her struggles that the Miner fund was created, through which Miss Briggs came to the public colored schools of Washington and Georgetown, D. C., as principal of the Miner Normal School, twenty years later.

She began the study of medicine at Boston before she went South to teach, but did not complete the course, a taste of the subject having convinced her that she was better adapted to teaching than for becoming a mere nurse, the purpose for which she entered the Boston Medical College.It is said by good authority that she was specially trained for teaching at the Bridgewater Normal School, but her immediate relatives now living are not sure that such was true. She was away from home quite awhile, taking a special course in Latin and French, and it may be that during this time she took the normal course. Be this as it may, she was pre-eminently master of whatever she attempted to teach, and so well equipped was she in every direction that her capability and aptitude for teaching seemed unbounded. She did good and thorough work wherever placed.She added to her mental store a knowledge of German during her career in Washington.

As early as 1867 she went to Easton, Md., where she taught two years. No facts are available to tell of her work there.

Two years later she received encouragement through the persuasion of friends at Washington, D. C., to go to said city and teach. Her application for the position of teacher in the public colored schools of Washington and Georgetown was favorably considered, and the date of her first appointment to a school in said District was during the autumn of 1869.

It was in this city, and through the schools of its vicinity, that the widest range was opened to develop all that was sterling in this woman. She was now in the employ of the largest and best system for public instruction for the race in this country, and rapidly grew in favor as teacher and disciplinarian, being made principal of one of the largest school buildings then under the public school management.

Having attained the highest position within the gift of the Board of Trustees, outside of the High School principalship, she was, in 1873, offered a position to teach at Howard University, which she accepted and filled creditably for six years.

In 1879 she was invited to return to the public schools as principal of the Miner Normal School, through which teacherships were supplied to the public schools of the District of Columbia. She accepted said position, held it for four years, having graduated during said time about eighty teachers.

The work of the Normal School increased during the four years to such an extent that the tax to carry out the excellent system she had inaugurated, with the limited assistance allowed, wore heavily upon her. Always sought after by the Howard University management, she returned there where the work was not so arduous and was teaching there at the time of her death, having been out of school but a few days.

She was principal of the Howard University Normal School at the time of her death and enjoyed the confidence and respect of the faculty and trustees to the highest extent.

Socially she will ever be missed at Washington. Much was due to her tenacity of purpose and innate love for literature that the admirably organized Monday Night Literary Club was kept intact for so many years, which has since “fallen to pieces” much to the detriment of many whose literary tastes were stimulated through it, and to that of Washington society, which had for so many years maintained as its pride this most admirably select organization. It seemed to be her hobby to have our boys and girls taught in industrial lines as well as otherwise, and through her efforts many were instructed through the means afforded by the Industrial Institute Association of Washington, D. C., to which she was elected president just prior to her death.

Miss Briggs was liberal with her means. While principal of Miner Normal School her salary was $1,350 per annum. She went about doing good to the needy, and withal accumulated some property, and was owner of the house in which she was born until she died.

Exercises "In Memoriam" were held by the Bethel Historical and Literary Society, Washington, D. C., May 14,1889. At said meeting addresses were made and appropriate resolutions eulogistic of her worth were passed. A committee of nine citizens was appointed to wait upon the District Commissioners and ask that one of the school buildings then in process of erection be called the "Martha B. Briggs Building," as appreciative of her work in the community. The request was cheerfully acceded to by the honorable Commissioners, and the large building at the intersection of Virginia into and Twenty-second and E streets, N. W., now principled by one of Miss Briggs' normal graduates, Miss M.E. Gibbs, bears that name.

Appropriate exercises to her memory were also held in Howard University Chapel, where eulogies were delivered by her friends and pupils, Prof. G. W. Cook and Miss E. A. Cook. A marble tablet has been inserted in the wall of the chapel bearing the inscription, "Her works do follow her."

Path Press - For more information and to purchase the book, click here.

"Women of Distinction: Remarkable in Works and Invincible in Character"