"No one in the world can change truth.
What we can do and should do is seek it and serve it when it is found."

Maximilian Kolbe is remembered for his heroic actions during one of the cruelest periods of modern history.

Raymond Kolbe was born in Russian-occupied Poland on January 8, 1894 into a Catholic family and remained a devoted follower of Catholicism. In 1907 he joined an order of Friars in Austrian-occupied Poland and adopted the name Maximilian.

As Kolbe grew older, his health, which had never been strong, deteriorated. He was racked by violent headaches and covered with abscesses; but these were small problems when compared with what was yet to come.

The German Invasion of Poland, 1939

When the Germans invaded Poland in September of 1939, Father Kolbe realized that his monastery would be taken over. He sent most of the friars home, warning them not to join the underground resistance. His monastery was ransacked, and Father Kolbe and about 40 other friars were transported to a holding camp in Germany, and later to one in Poland.

The friars were released and allowed to return to the monastary on December 8, 1939. The monastary became a refugee camp for thousands of Poles and Jews of the Poznan district seeking escape from Nazi persecution. The friars shared everything they had with the refugees and the monastery became a universal shelter of brotherhood. For this reason, Father Kolbe and his friars soon came under suspicion by the Gestapo.

Father Kolbe, as a journalist, publisher and intellectual who had refused German citizenship, was considered a threat to absolute German domination. To incriminate him, the Gestapo permitted one final printing of the "Knight of Mary Immaculate" in December of 1940. It was in this issue that Father Maximilian wrote:

The real conflict is inner conflict. Beyond armies of occupation and the catacombs of concentration camps, there are two irreconcilable enemies in the depth of every soul: good and evil, sin and love. And what use are victories on the battle-field if we ourselves are defeated in our innermost personal selves?

On February 17, 1941, Father Maximilian was again arrested, this time on charges of aiding Jews and the Polish underground. Gestapo officers who were shown around the whole monastery were astonished at the small amount of food prepared for the brothers. Father Maximilian was sent to the infamous Pawiak prison in German-occupied Warsaw, and was singled out for special ill treatment.

Father Maximilian and four companions were deported to Auschwitz on May 28th, 1941, which was then both a labor and a death camp. Over the entrance gate of this concentration camp was a sign in German: Arbeit macht frei - "Work makes you free," a mockery of human spirit and human endeavors. Few who passed through that gate left the camp alive. Upon entering Auschwitz, Camp Commandant Karl Fritsch ("Butcher" Fritsch) told prisoners that Jews had the right to live only two weeks, and Roman Catholic priests one month. Cruelly, they were told that the only way out of the camp was through the chimneys of the crematorium.

Father Maximilian received the striped convict garment and was tattooed with the number 16670. He was put to work immediately carrying blocks of stone for the construction of a crematorium wall.

Near the end of July, a prisoner apparently escaped, and men from Kolbe's bunker were paraded in the blazing midday sun, knowing what to expect. One man from each line was selected at random, including a sergeant, Francis Gajowniczek. He cried out in a despairing voice, "My wife, my children, I shall never see them again!" Then a man stepped out from the ranks and offered to take Gajowniczek's place. He was prisoner 16670, Father Maximilian Kolbe. The SS man, "Butcher" Fritsch, did not care who went to the Bunker, so long as there were ten of them, so he nodded. "Who are you?" he asked carelessly. "I am a Catholic priest. I wish to die for that man. I am old; he has a wife and children." Father Kolbe and the nine others were led off to the death chamber of Cell 18.

In 1982, Pope John Paul II made Maximilian Kolbe a Catholic Saint. His feast day is August 14.

Francis Gajowniczek, the man for whom Maximilian Kolbe gave his life, survived the war and was present at the 1971 beatification (blessing) ceremony of Father Kolbe. Gajowniczek died in 1995. 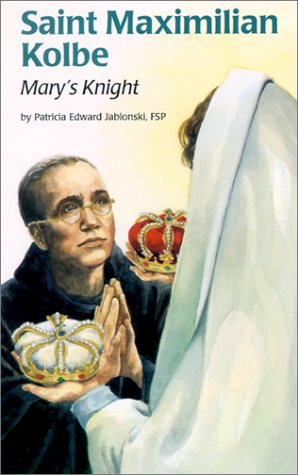 My hero is Maximilian Kolbe. My hero died in the darkest days of World War II as an inmate of a death camp. Some people were chosen to be put to death for some trivial infractions. Maximilian Kolbe, a Catholic priest, offered to take the place of a man who had a family and stepped forward. Heroism is like that, a simple stepping forward. Colonel Travis at the Alamo drew a line in the sand and asked all who were with him to step over the line and join him. They did. Jim Bowie, on a stretcher was carried over. Men like Maximilian Kolbe shine forth like beacons during mankind's darkest moments.