NASA’s spacesuits have a gender problem. These women are fixing it.

Sometimes the noblest of goals can get held up for what seem like trivial reasons. Examining those reasons can often reveal a path to progress.

JULY 20, 2020 - It was going to be a historic moment: Last spring, for the first time, an entirely female team of astronauts was to embark on a spacewalk. 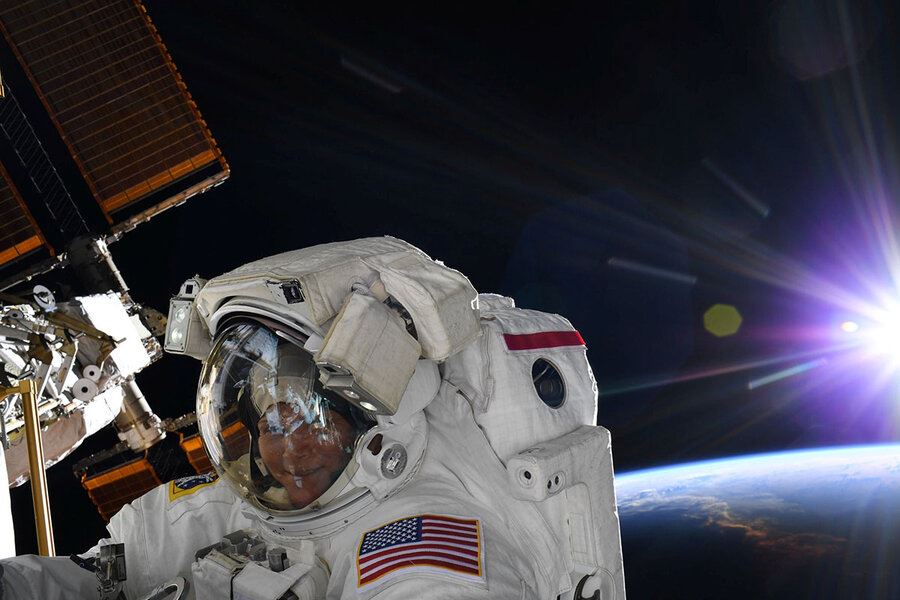 NASA astronaut Anne McClain performs a spacewalk at the International Space Station in this social media photo on March 22, 2019.NASA/Reuters/File

But just days before Anne McClain and Christina Koch were to venture outside the International Space Station, NASA swapped Ms. McClain for a man. They’d realized there weren’t two spacesuits ready that would work for both women.

That reversal drew scorn. Instead of being a moment to celebrate the agency’s progress toward gender equality, it seemed to expose how much work remained in supporting female astronauts.

Barriers to equality can be baked into infrastructure, like spacesuits, for years. But what happened with the first attempt at an all-female spacewalk may also represent long-term progress toward including women at NASA – and in workplaces in general.

The first all-female spacewalk attempt helped “throw into sharp relief long-standing circumstances that are about gradual change,” Dr. Weitekamp says. It also “shows, in some ways, the maturity of the program and the persistent presence of women in it.”

In the 1960s, NASA’s spacesuits were custom made for individual astronauts, who, at the time, were all men. In the 1970s, the agency’s priorities shifted and more astronauts flew, so NASA opted for spacewalking suits – officially called extravehicular mobility units, or EMUs – that could be used by multiple astronauts to save money and time. These suits are modular, with separate pieces for arms, legs, and torsos. Women, the thinking went, could fit into the same sizes made for smaller men. 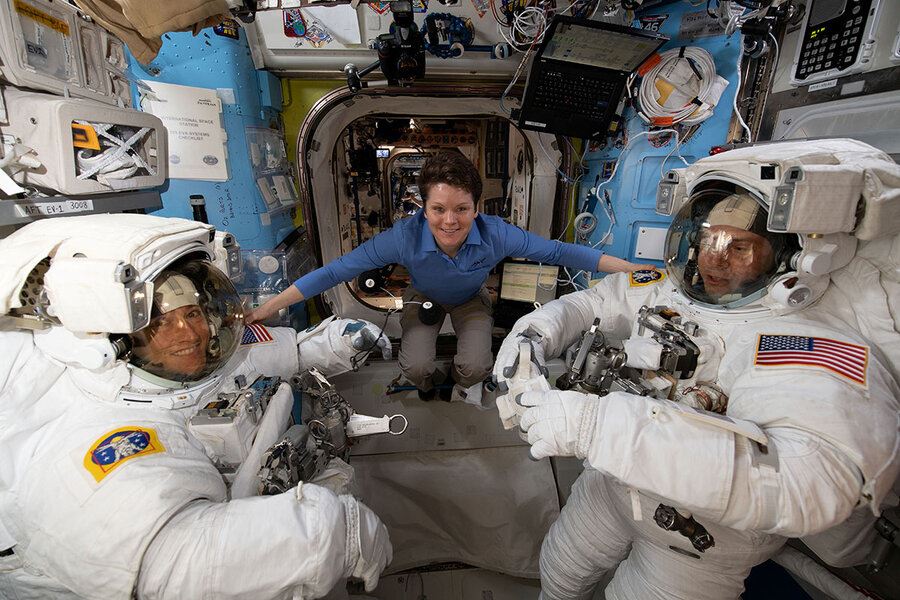 That plan might have worked acceptably, but later budget cuts led to NASA slashing some of the sizes, leaving only the mediums and larges. During the space shuttle era, astronauts who didn’t fit the available sizes could still participate in missions, but they couldn’t do a spacewalk, says former astronaut Bonnie Dunbar. But that changed with the International Space Station, as all astronauts are expected to perform spacewalks.

Before launching, Ms. McClain had trained for spacewalks underwater like every other astronaut, testing out different-sized suits. But once aboard the space station, she had the opportunity to do a spacewalk (with a male astronaut), and after experiencing true microgravity, she realized she needed a different torso size.

Sizing is very important, says Dr. Dunbar, who flew on the space shuttle five times and now is director of the Aerospace Human Systems Laboratory at Texas A&M University. “If [the joints of the spacesuit] are not in the right place, you have to really work at it to make it bend,” sometimes making it impossible to function in the suit at all.

A request to tweak a spacesuit once aboard the space station is “not uncommon,” says Lindsay Aitchison, a NASA spacesuit engineer. But the first all-female spacewalk attempt was scheduled for a few days later, and reconfiguring the life-support system to a different torso piece would take too long. The crew decided together to change who did the spacewalk, Ms. Aitchison says.

“It is actually a sign of women’s secure and equal standing in the astronaut corps that Anne McClain was able to make the call that she did, even after all of the public pressure of the publicity,” Dr. Weitekamp says. “For her to be able to say 'the equipment doesn’t fit me and I won’t be able to perform well' means that she knew they wouldn’t just yank her from the rotation.”

Recently, women have held some of the highest offices at NASA, and  are designing the next generation of spacewalking suits.

Last fall, NASA revealed new spacesuits designed for the Artemis program, in which the agency aims to land the first woman on the moon. Those new suits, called exploration extravehicular mobility units, or xEMUs for short, will still be modular, says Ms. Aitchison, who leads the design team. But the team uses digital renderings of about 100 body shapes and sizes as a guide.

“We’re designing spacesuits for humans, not men or women specifically, just humans. But over the years, we’ve really had to evolve our thinking about what that means. It’s kind of a shift from thinking not just of men as bigger women or women as small men,” Ms. Aitchison says. “Our bodies are truly different.”

Recent classes of astronauts have been roughly half women. “They’re the future of the space program,” says Amy Foster, associate professor of history at the University of Central Florida and author of "Integrating Women Into the Astronaut Corps." So systems are being designed with them in mind.

But the aerospace industry more broadly hasn’t yet reached parity. And the fields (research, science and engineering, and the military) that people start in before becoming astronauts are still mostly male.

"The opportunities are there," Dr. Dunbar says, now it's just about recruiting and encouraging more young people – regardless of gender.

In October 2019, two women had come up for the spacewalking job once again, and astronauts Ms. Koch and Jessica Meir performed the first all-female spacewalk.

It’s something to celebrate, says Dr. Foster. “It’s one of those hopeful things that I’m proud that I got to witness.”