Italian author Oriana Fallaci isn’t exactly a household name in the United States, but if you are passionate about words and love history, you should read some of her interviews. Known mainly for her uncompromising style and focused insight, Fallaci has interviewed many world leaders and celebrities; reaching depths that few journalists venture to explore.

I marvel at Fallaci’s ability as a writer and historian because she strives to go beyond the apparent; looking for and gaining revelations from her subjects. Fallaci prefers to be thought of as a writer and not a journalist, and her articles show this. When writing, she includes her thoughts -- passions unhindered -- on the experience of interviewing her subject. In each interview, the descriptions are vivid and colorful with no physical detail too small or inconsequential to notice. The reader feels as if he or she was there at the interview.

In her interviews, Fallaci has always chosen to share her opinions; unafraid of her critics. Usually, journalists attempt to objectively document history by avoiding opinions. Having worked for many years as a photojournalist and network news producer, I found this to be unnecessary. While swept up in the emotion of covering events around the world, I too have found it impossible to remain an impartial observer in my professional endeavors. It is almost always better to have opinions, and in the process of news gathering if those opinions are altered, then more knowledge for the reader and writer becomes available. Where many journalists choose not to take a stance, Fallaci’s opinions are always part of her work.

As a journalist, it is important to understand the conditions that cause people to do they do, to accept the truth and to believe in virtue. Initially, I became a photojournalist in hopes of educating and entertaining a large audience. Through the years, however, I learned that it isn’t enough to only reveal the justices or injustices that abound. People must be willing to look, without cynicism, at the world around them and learn from history.

Fallaci was born June 29, 1930 in Florence, Italy and lived through the Resistance in Italy. Her father Edoardo, a cabinet maker in Florence, was a political activist struggling to put an end to Mussolini’s dictatorship. It was here that she first learned of the atrocities of war. Courageous in her approach, Fallaci looks to confront the reality and brutality of war and abuse of power. She is a strong believer in the power of words and that the abuses and cruelty of dictatorial power can be assailed through perseverance and intellect.

Fallaci says she writes and rewrites, and then rewrites again. Eloquent and articulate, politically minded and always opinionated, Fallaci’s writing has been translated from Italian into English, Spanish, French, Dutch, German, Greek, Swedish, Croatian, and more.

Besides contributing to magazines and newspapers worldwide, she has written novels, won awards for her writing and lectured at the University of Chicago, Yale University, Harvard University and Columbia University. She began her career as a columnist writing about crime for an Italian newspaper, but quickly moved on to assignments that took her all over the world.

Fallaci remembers, "I sat at the typewriter for the first time and fell in love with the words that emerged like drops, one by one, and remained on the white sheet of paper... every drop became something that if spoken would have flown away, but on the sheets as words, became solidified, whether they were good or bad..."

Fallaci questions everything. Never shy, she has been granted access to world leaders and politicians across the globe. Some of her most memorable interviews include Henry Kissinger, the Shah of Iran, Ayatollah Khomeini, Willy Brandt, the late Pakistani leader Zulfikar Ali Bhutto, Walter Cronkite, Muhammad Khadafi, Federico Fellini, Sammy Davis Jr., and Sean Connery.

The 73-year-old Fallaci currently divides her time between New York City and the hills of Tuscany, Italy. The Rage and the Pride is Fallaci’s first book after a ten year self-imposed silence. The attack on September 11th prompted this work and reactions from around the world have been mixed. The Rage and the Pride recently came under fire in Europe, where a Muslim human rights group tried to have it banned in France. A French court rejected the request, so the group asked for a disclaimer to be placed in each book. Fallaci's words were victorious -- the court dismissed that request as well.

While it might be difficult to agree with some of her more extreme positions, reading her work is an opportunity to appreciate her ability to tackle problems in our complex world. In combatting injustice, Fallaci isn't afraid to invite controversy and embrace debate.

This essay was written several years ago.
On September 15, 2006 Oriana Fallaci passed away.
The world has lost a great journalist.

"…today's history is written the very moment it happens. It can be transmitted immediately through the press, radio, television. It can be interpreted, heatedly discussed. For this reason I like journalism. For this reason I fear journalism. What other profession allows you to write history at the very moment it happens and also be its direct witness? Journalism is an extraordinary and terrible privilege. Not by chance, if you are aware of it, does it consume you with a hundred feelings of inadequacy. Not by chance, when I find myself going through an event or an important encounter, does it seize me like anguish, a fear of not having enough eyes and enough ears and enough brains to look and listen and understand like a worm hidden in the wood of history."
-from Interview with History by Oriana Fallaci

From the book, Immortality, author, Milan Kundera writes, "...who is the pioneer of modern journalism? Not Hemingway who wrote of his experiences in the trenches, not Orwell who spent a year of his life with the Parisian poor, not Egon Erwin Kisch the expert on Prague prostitutes, but Oriana Fallaci who in the years 1969 to 1972 published a series of interviews with the most famous politicians of the time. Those interviews were more than mere conversations; they were duels. Before the powerful politicians realized that they were fighting under unequal conditions--for she was allowed to ask questions but they were not--they were already on the floor of the ring, KO'ed."

The Rage and the Pride
Oriana Fallaci 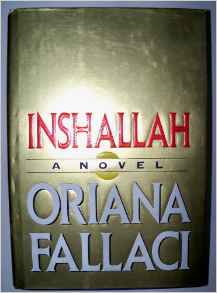 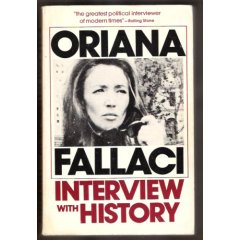