Oscar Wilde -- famous 19th century playwright, epigrammatist, poet, dandy and all around wit -- was born Oscar Fingal O'Flahertie Wills Wilde in Ireland on October 16, 1854. He went to Trinity College in Dublin where he distinguished himself in Ancient Greek, and then Magdalen College in Oxford, where he won the Newdigate Prize for poetry.

At Oxford, Wilde was influenced by two of his tutors -- John Ruskin, the leading art critic of the Victorian era, and Walter Pater, an essayist -- both of whom were leaders in the Aesthetic Movement. The Aesthetic Movement was known for valuing beauty over social or political ideas in art, and came to be known by the motto "art for art's sake."

It was also during this time that Wilde started to become known for his flamboyant dress and his epigrams, or short witticisms, such as:

"I can resist everything except temptation."

"Be yourself; everyone else is already taken."

"True friends stab you in the front."

"I am so clever that sometimes I don't understand a single word of what I am saying."

His biographer, Frances Winwar described him thus: "His real work was accomplished when he talked. Before a group of listeners, especially if they were young and handsome and titled, he outdid himself. In the spark of their admiration his mind quickened. Epigram followed epigram, one more dazzling, more preposterous than the other, yet always, like the incandescent core of the firework, with a burning truth at the heart." 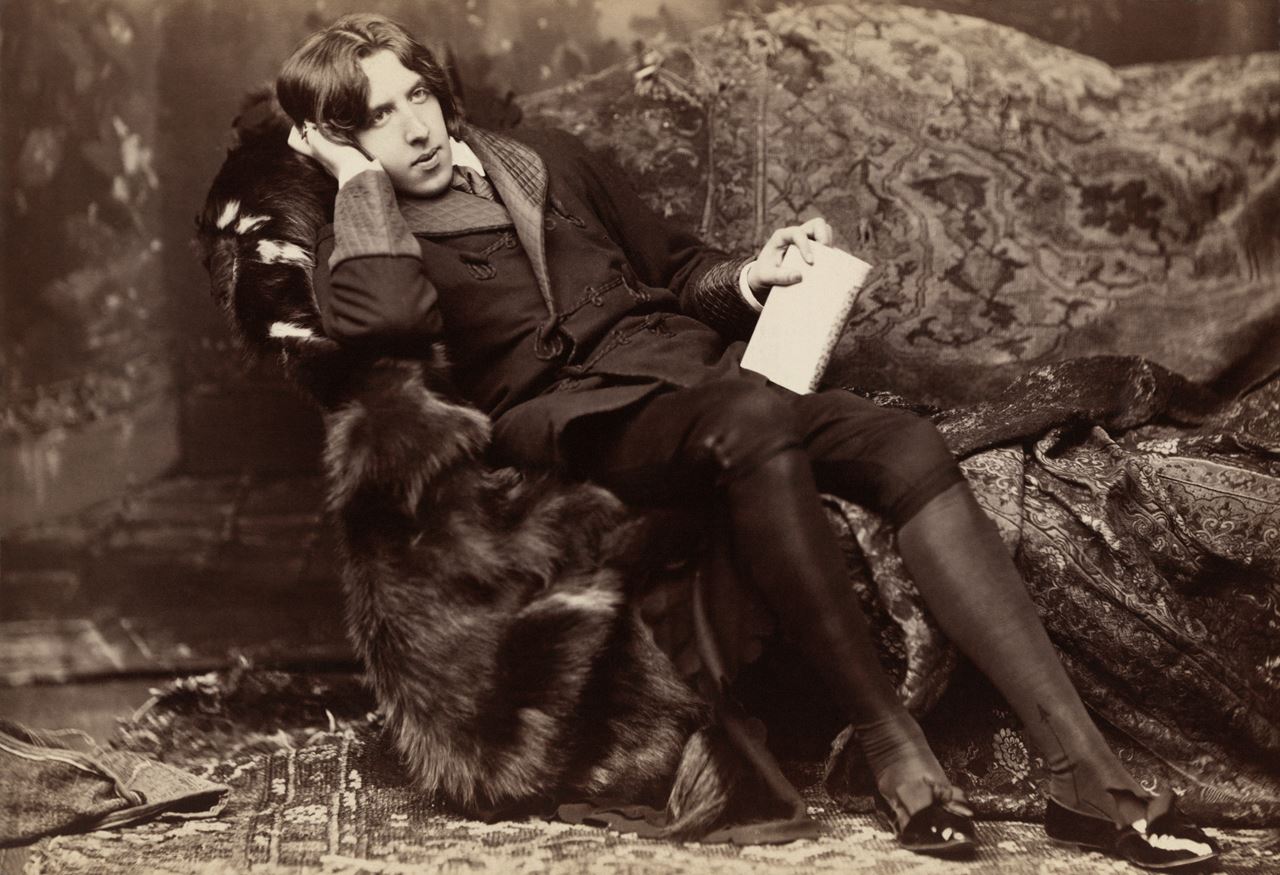 Wilde published his first book, Poems, in 1881, which was better received across the Atlantic. He went off to the United States to give a lecture tour. There he met the American poet Walt Whitman, who, some claim, taught him how to be famous. Wilde was a success at parties and had created his image with a series of photographs taken by Napoleon Sarony. In fact, became the most well-known Briton in the United States, second only to Queen Victoria! He described the tour as a great deal of handshaking. "Sometimes," he said, "I honor them with a royal observation."

Wilde married Constance Lloyd and had two children. He published his only novel, The Picture of Dorian Gray, in 1890, which was controversial for being supposedly immoral, perhaps due to the suggestions of homosexuality. The novel was praised by his former teacher, Walter Pater, and reportedly by the Irish poet William Butler Yeats. Yeats said of it that despite its flaws "it was a wonderful book." Wilde countered that the book, rather than being immoral, had in fact a "terrible moral lesson."

During 1893, Wilde began his affair with Lord Alfred Douglas, and they lived together. Wilde became known for writing several society comedies, the most famous being The Importance of Being Earnest, which premiered in 1895. It was in this year, while the play was being performed and at the height of his fame, that Wilde was arrested for "gross indecency" with other men. He pleaded not guilty, but was to give his famous defense of "the love that dare not speak its name." 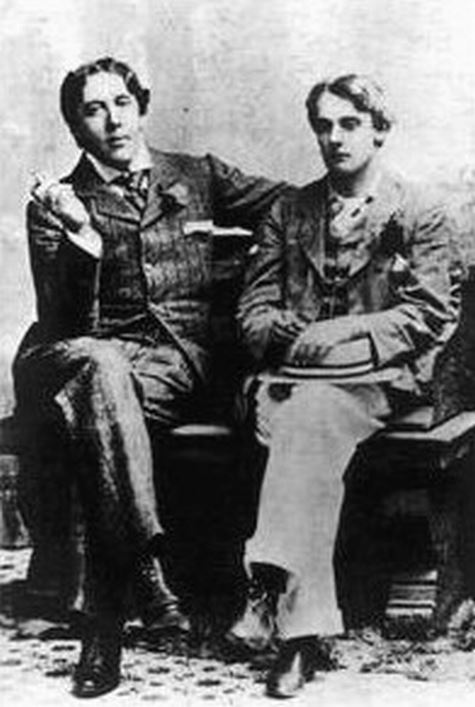 "The love that dare not speak its name" in this century is such a great affection of an elder for a younger man as there was between David and Jonathan, such as Plato made the very basis of his philosophy, and such as you find in the sonnets of Michelangelo and Shakespeare. It is that deep spiritual affection that is as pure as it is perfect. It dictates and pervades great works of art, like those of Shakespeare and Michelangelo, and those two letters of mine, such as they are. It is in this century misunderstood, so much misunderstood that it may be described as "the love that dare not speak its name," and on that account of it I am placed where I am now. It is beautiful, it is fine, it is the noblest form of affection. There is nothing unnatural about it. It is intellectual, and it repeatedly exists between an older and a younger man, when the older man has intellect, and the younger man has all the joy, hope and glamour of life before him. That it should be so, the world does not understand. The world mocks at it, and sometimes puts one in the pillory for it.

Wilde was eventually sentenced to two years of hard labor. The court erupted into cries of "shame!" which drowned him out at his sentencing. He was bankrupted. His wife and two children moved to Switzerland. When he was transferred to Reading Gaol, he was spat upon. The prison work ruined his health, and when he was released he went to Paris, where he died two years later of meningitis. During his time in prison, he wrote a famous series of letters to Lord Alfred Douglas, entitled "De Profundis." But the letters were ultimately intended for a greater audience.

"A great friend of mine—a friend of ten years’ standing—came to see me some time ago, and told me that he did not believe a single word of what was said against me, and wished me to know that he considered me quite innocent, and the victim of a hideous plot.  I burst into tears at what he said, and told him that while there was much amongst the definite charges that was quite untrue and transferred to me by revolting malice, still that my life had been full of perverse pleasures, and that unless he accepted that as a fact about me and realised it to the full I could not possibly be friends with him any more, or ever be in his company.  It was a terrible shock to him, but we are friends, and I have not got his friendship on false pretences." 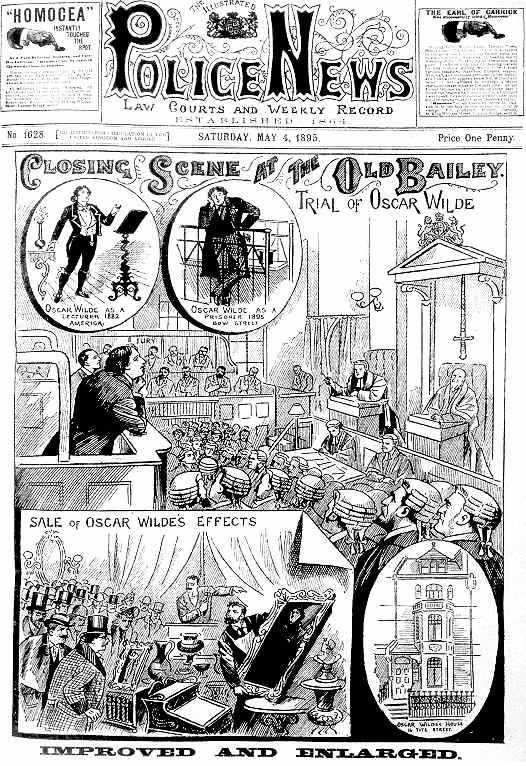 The letter was published in part by his former lover Robert Ross in 1905. Ross gave Lord Alfred a copy of the letter, rather than the original, fearing he would burn it. Ross donated the original manuscript to the British Museum, with instructions that the remainder could not be published until 1960. The full text was published in 1962 in the Collected Works of Oscar Wilde. In the letter we see that Wilde, who said he had only wished to feel pleasures in life, had in fact been changed by his experience of suffering:

"I used to live entirely for pleasure.... My mother, who knew life as a whole...I remember quite well how I used to tell her that I did not want to eat my bread in sorrow, or to pass any night weeping and watching for a more bitter dawn.

I had no idea that it was one of the special things that the Fates had in store for me: that for a whole year of my life, indeed, I was to do little else. But so has my portion been meted out to me; and during the last few months I have, after terrible difficulties and struggles, been able to comprehend some of the lessons hidden in the heart of pain...What one had felt dimly, through instinct, about art, is intellectually and emotionally realised with perfect clearness of vision and absolute intensity of apprehension."

Wilde died sick, outcast and destitute. It is not known whether the story is true that even his last words were a quip: "Either that wallpaper goes, or I do." Wilde's life was made into a movie in 1996 called "Wilde."