It is easy enough to vote right and be consistently with the majority . . . but it is more often more important to be ahead of the majority and this means being willing to cut the first furrow in the ground and stand alone for a while if necessary. -- Patsy Mink, October 8, 1975 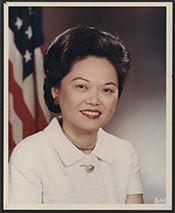 Patsy Mink was born on December 6, 1927. She was the first woman of color, and first Asian American who was elected to the US Congress. As well being one of many firsts -- she was also the first Asian American to seek the presidential nomination of the Democratic Party in 1972! -- she was a lifelong advocate for equity for women. She fought for women’s advancement in educational and economic  opportunities, especially working mothers for most of her life.

At the time Patsy was growing up, Hawaii was still a US territory, and non-whites faced discrimination by whites of European ancestry. For example, schools were segregated, and Patsy had to pass an English  test to get admitted into a mostly white school where she first became more acutely aware of racism.

Her father, a civil engineer, was discriminated against at his work as the only Japanese-American / non-white in a managerial role at his company. (After being passed over for promotion several times, in 1945 he resigned in a quiet protest and moved Patsy’s family to Honolulul).

These racial tensions increased because Japan bombed Pearl Harbor in 1941. Japanese in the US were suspected of being part of the enemy, and approximately 120,000 were put in internment camps. In Hawaii, families began hiding or destroying things or customs that connected them to their Japanese culture, such as kimonors or swords. During this time, Patsy was a junior in highschool. She had just been elected to president of the student body at Maui High School. Perhaps showing an early political talent, she managed to overcome this by making coalitions with different cliques and was a popular president.

Fighting Discrimination (and Succeeding!) in College

Patsy attended a small colleged called Wilson College first. The college President met her and expected her not to know English! She then transferred to University of Nebraska. There she began one of many fights against discrimination when she learned that non-white students were given separate housing in the so-called “International House.” But American students who were non-white were also housed there. She began a letter-writing campaign to the school board. She succeeded, galvanizing a supportive community, in ending the university’s segregation policies that year.

Although she wanted to be a doctor, in 1948, none of the medical schools she applied to after college accepted women. Patsy went to the University of Chicago Law Schoo, which has admitted women since 1902. She realized how important law is, to change realities like this.

Hawaii became the 50th state of the Union in 1959. Patsy was  a State Senator from 1962 to 1964. In 1965, she was elected to the US Congress and served for six consecutive terms. She represented Hawaii’s first and second congressional districts.

Patsy introduced much important legislation such as the Early Childhood Education Act, which outlines and gives funding for pre-school through kindgarten programs. She also introduced the Women’s Educational Equity Act, which aims to combat gender stereotypes in elementary and secondary school.

In 1972, she co-authored Title IX, an important federal law. Title IX prohibits US citizens from being discriminated against based on gender under any educational program that receives Federal assisstance. She also ran for the presidential nomination of the democratic Party.

Hawaii Senator Mazie Hirono, the first Asian American women elected to the Senate, who knew and was inspired by Patsy, said: “A major part of Patsy’s legacy is the landmark Title IX legislation, which she co-authored and relentlessly fought for...This legislation gives women and girls equal access to higher education, protection from sexual harassment and prohibits gender discrimination in all educational activities. No longer could universities and institutions of higher learning reject a woman because they had “fulfilled their quota of female students,” as many women were told, including Patsy’s daughter…its continuing importance cannot be overstated, from its impact on female participants in the Olympics to the millions of girls participating in school and organized athletics.” 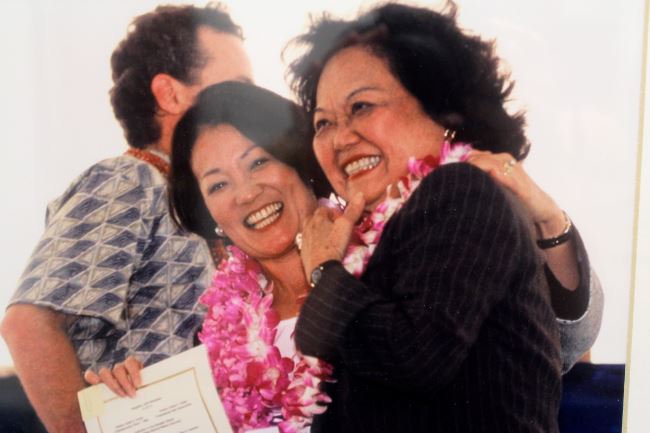 After being appointed by President Jimmy Carter as US Assistant Secreatry of State for Oceans and International Environmental and Scientific Affairs in 1976, Patsy moved to Honolulu and served on the city council. She was re-elected to Congress in 1990.

Patsy passed away from complications due to chickenpox in 2002, at the age of 74. She was running for re-election, and although she passed away before the election, she still won. She was much mourned, both in the state of Hawaii and nationally.

The Title IX Amendment of the Higher Education Act was renamed the “Patsy T. Mink Equal Opportunity in Education Act” in her honor in 2002.

A pioneer for women’s equality, Patsy’s influence continues to this day. Senator Mazie Hirono cast her first vote in Congress in 2007 in honor of Patsy Mink.

Senator Hirono said of her, “Patsy was certainly a fighter.”

Patsy Takemoto Mink Education Foundation - "Established in 2003, the Patsy Takemoto Mink Education Foundation aims to carry on some of Mink's most ardent commitments: educational access, opportunity, and equity for low-income women, especially mothers; and educational enrichment for children. In 2017, the Foundation will offer five Education Support Awards of up to $5,000 each to assist low-income women with children who are pursuing post-secondary education. Awardees will be notified in late October." - Patsy T. Mink Foundation