by Romeo Gilson from San Diego, California in United States

Swoosh! Swoosh! Swoosh! This is the sound of a human struggling to move in space, using tons of energy every step they undertake. Imagine having to survive in outer space for over 665 days. Well, Peggy Whitson was able to accomplish that. “Peggy Whitson was named to be the first astronaut to be named science officer of the international space station” (“Peggy Whitson.” Newsmaker). After growing up in Iowa with a population of only 32 people, she unexpectedly became one of the most successful astronauts to ever exist. She has participated in over 100 in-space tasks, including the ongoing construction of the space station (Pasquet), “conducted a four-and-a-half hour spacewalk to install micrometeoroid shielding on the space station's exterior” (“Peggy Whitson.” Newsmaker). Peggy Whitson’s first-ever launch to space was in 2002 where she had trained for over 15 years for the next couple of months in space (Peggy Whitson” Peggy Whitson). She has been an inspiring hero since she first launched off to space. This woman has always been a fearless person. She never once stopped trying even though she went through years of disapproval and people trying to push her down. Even with all of the negative feedback from others she never stopped trying to pursue her dream. Whitson did not only toughen through 665 days of surviving in space completing over 21 impossible missions, but her fearless acts also inspire millions of boys and girls every day (Pasquet). She never stopped breaking by complications, neither in space nor through lack of motivation. 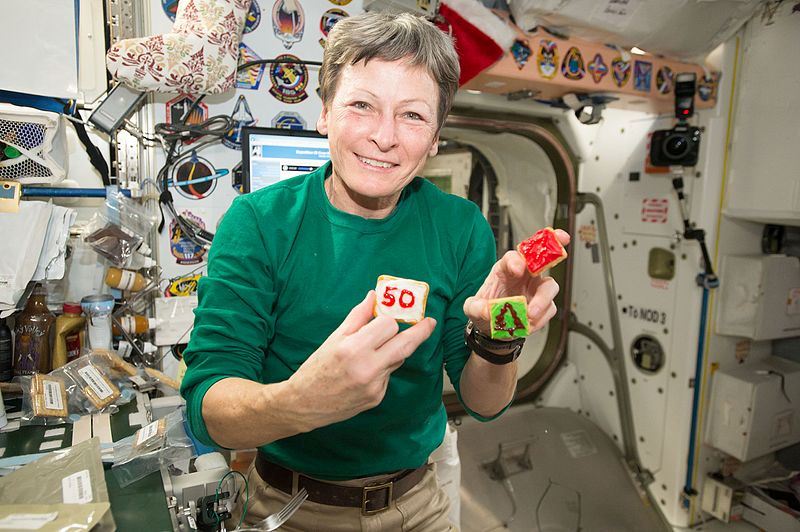 Christmas Eve In SpaceNASA [Public domain]As an astronaut, she went through a lot of challenges and had to break through many fears of failing or not pursuing her dream. Thomas Pesquet, one of Whitson’s friends who developed an acquaintance with her and trained with her for years claims, “She is by far the most hardworking and strong-willed person I’ve ever met. She never accepts limitations. And she’s a genuinely good person: passionate but kind, fearless but gentle, with all the heart you want a leader to have, in order to follow her into battle” (Pasquet). Thomas Pasquet got to know her through years of training as shown through a published Times article. He generally thought she was a fearless, and passionate hero. Petty Whitson broke through all her fears with courage and determination. She never doubted herself or listened to the upsetting ways people tried to prevent her from pursuing her dreams. Her fearless actions led to more opportunity for success. All the hard work she put in her training eventually came back to her in breathtaking moments. Like every hero, she had to go through some stages of denial and challenges, “When she was passed over, she did not admit defeat. Instead, she simply prepared another application for the next class. For the next decade, her application was rejected every year, but she never gave up. After each rejection, she filled out another application for the next year's program” (“Peggy Whitson” Peggy Whitson). It was a laborious challenge for women to be let in the astronaut program. It took her years to get accepted and she was denied for a sum of ten times, indicating ten years of sending new applications. It was hard for her but she toughened through her fears and didn't let anything get in her way of pursuing her dream. For some people, ten years would be impossible for them to wait. However, 10 years is 1 seventh of an average person life and those years of her life were the most important of a humans life. Karen Gibson proves Peggy's lack of fears in her book: ”Other people have dreams of becoming astronauts but sometimes they give up. Peggy's self-proclaimed hardheaded determination kept her going, even when people tried to talk her out of it” (Gibson 64). Many people give up and ignore their hopes and dreams, but Peggy was just not one of those people. She never stopped believing in herself, she never let the hate get to her beliefs and she never feared the competition. Peggy was one of those people who when they have their mind set on something they try their hardest to accomplish it.

Training and exceeding as an astronaut was not simple and took a lot of tough difficult times. As she became an astronaut she started completing many tasks in space “She also participated in the ongoing construction of the space station, installing structural components using the station's remote manipulator system, which she operated from the inside of the station. She also conducted a four-and-a-half hour spacewalk to install micrometeoroid shielding on the space station's exterior. In 2017, Whitson broke the record for longest time spent in space clocking in 665 days total” (“Peggy Whitson.” Newsmakers). This mostly explains Peggy's accomplishments and astonishing tasks during her time on space. All of these occurrences bring out her heroism and strength. It is common knowledge that walking on space overall is difficult but she managed to finish this 4 and a half hour long space task. A normal person would not be able to accomplish these tasks, without years of training and determination. Interestingly, with that amount of training, Whitson was able to make it to that point of fulfillment. She wasn't only a very tough person but many people considered her a leader: “This woman has what it takes to be a leader. Part of her record 377 days in space was spent as the first female commander of the International Space Station” (Gibson 64).  This world record-breaking woman had everything a hero has. She had the support an inspiring soul gets, she had the physical skill to accomplish exterior things and she was considered a leader. My hero was the first female commander when she was on her 377-day streak for being on space. She wasn't only considered a tough hero because of her strength, but also for being a person that can benefit others. 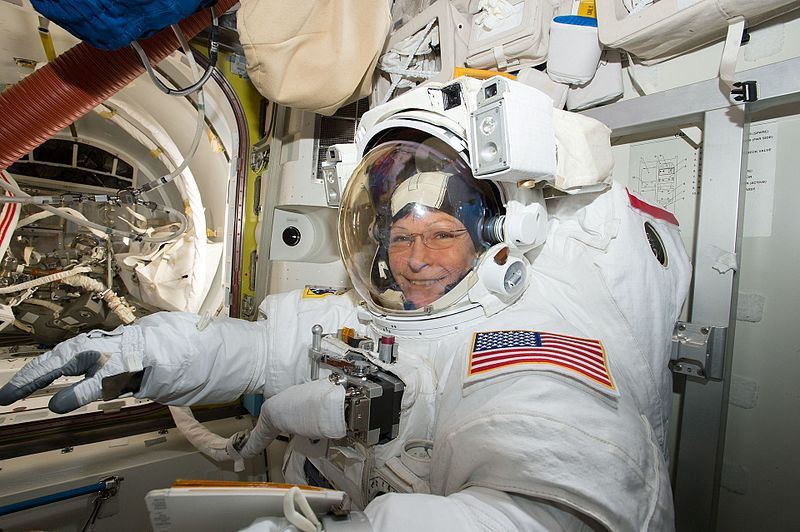 Inside AirlockNASA [Public domain]Peggy Whitson accomplished many unbelievable things and everything she has done has put an inspirational effect on millions of people. Overall she was an amazing standout on and off duty. One of those reasons being she never feared the scary things that were in her path. She always stayed tough and never let anyone doubt her. Instead, she influenced people and acted as someone they could look up to. Through her fearless acts and the tough things she accomplishes, she inspires the people that she is a role model for. Millions of boys and girls look up to her as a hero and her background amazes and inspires people to pursue their dreams. Peggy changes people's mindsets and she lets them dream big: “And as I watch her legacy unfold, and I see the looks on little girls’ faces when she speaks and the difference in their lives that she’s making, it reminds me that, yes, one can change history and make Earth a better place by going to space, because that’s what Peggy has achieved”(Pasquet). She has accomplished so many great things to the point she has given little girls and boys hope. Ever since I learned about this incredible hero I have been motivated to do more. To add to that, she also made me rethink my level of success. Am I doing my best, am I pursuing my dream or at least obtaining the education for my dreams? As a whole, Peggy Whitson, originating from a little town in Iowa, has inspired me to be successful and to pursue more in life.  A woman who jumps around in space is able to have an effect on people's lives through inspiration and helping to pursue their dreams.