Saving the blue-footed booby, one pair of socks at a time

by Riley Robinson from ARLINGTON, MASSACHUSETTS

Species decline can seem daunting – but not to the Gladstone boys. Spurred by a love of birds, two brothers turned their care into creative fundraising. Through patience and pluck, they've funded research an ocean away.

NOVEMBER 13, 2019 - ARLINGTON, MASSACHUSETTS - Will Gladstone remembers first learning about the blue-footed booby in his fifth grade science class. It helps that they are distinctive birds: They have cerulean flippers and a wingspan stretching about 5 feet. They’re known for their wobbly mating dance and are an icon of the Galápagos Islands, located more than 600 miles off the coast of Ecuador. 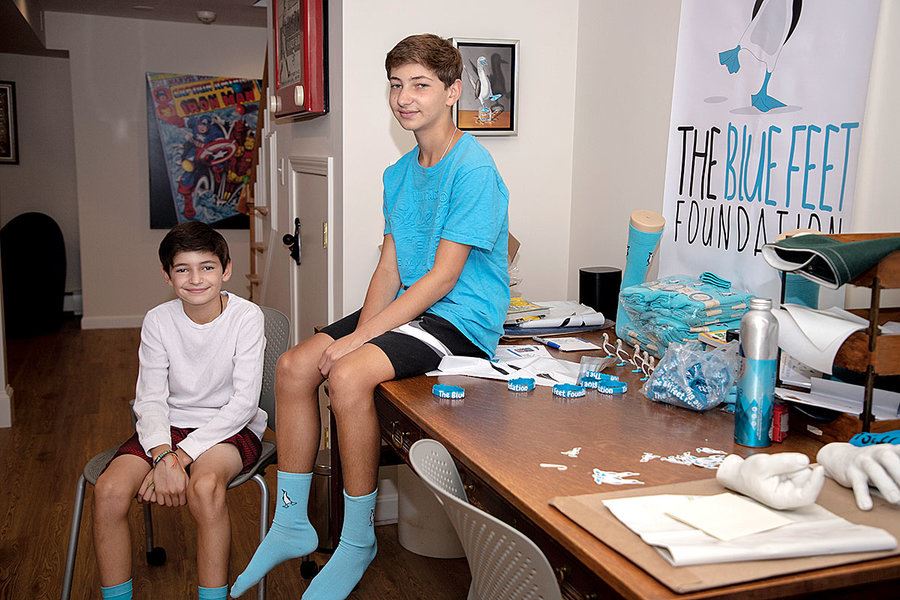 “They’re really kind of a unique bird, and whenever someone goes to the Galápagos, that’s the thing that will stick in everybody’s head,” says Will, a high school freshman from Arlington, Massachusetts.

The blue-footed booby population in the Galápagos has shrunk to a third of its size since the 1960s. This fact stayed with Will, who grew up bird-watching with his dad around their hometown. Will had never been to the Galápagos, nor seen a blue-footed booby in person, but decided he wanted to help protect the species. A few days later, he came up with a plan: He could sell blue socks, the same color as the bird’s feet, to raise money for conservation efforts.

Since Will launched his online site The Blue Feet Foundation in March 2016, he has sold about 10,000 pairs of socks to customers in 46 countries, raising about $90,000 after costs. All profits go to the Galapagos Conservancy and the Charles Darwin Foundation, two research and conservation organizations based in the Galápagos Islands. Will’s younger brother Matthew also joined the sock-selling effort once orders flooded in.

“It’s really important to appreciate our impact on the environment and to understand both how we can have a positive and how we can have a negative impact,” says David Banister, Will’s fifth-grade science teacher whose class at The Fessenden School inspired the project. “Too often it’s doom and gloom and everything that’s going wrong, environmentally, in the world. ... I’m just so proud of [Will and Matthew] for the follow-through and the persistence and the perseverance.”

Will’s and Matthew’s efforts are already having a ripple effect. Their fundraising sponsored a blue-footed booby population survey in 2017 by a team of 10 researchers – an important, but expensive step in ecological data collection. The survey examined nearly 700 miles of coastline. 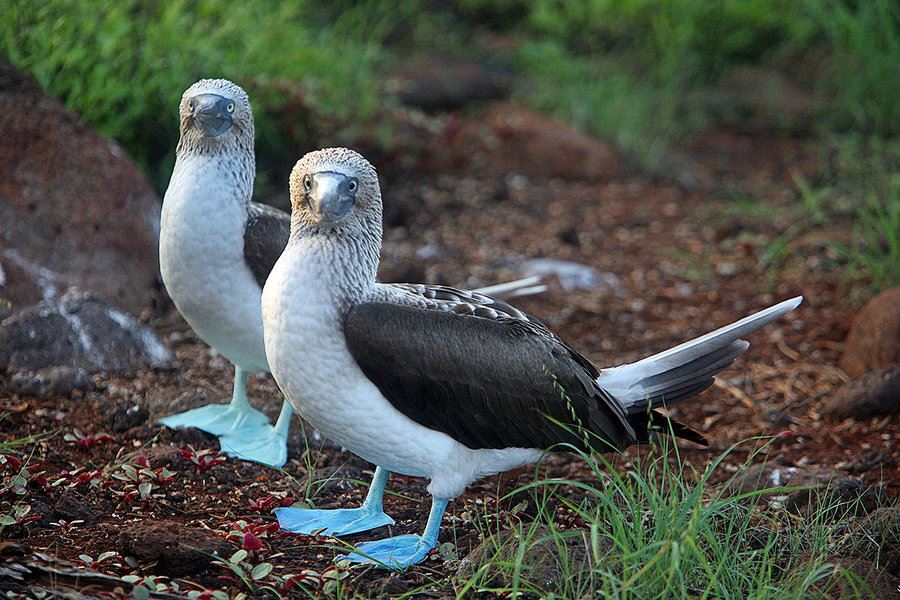 An icon of the Galápagos Islands, blue-footed boobies are known for their wobbly mating dance and cerulean flippers.Melanie Stetson Freeman/Staff/File

The researchers report that while they are still analyzing results, they did see many more juvenile birds than in their previous study in 2012, says David Anderson, a biology professor at Wake Forest University in North Carolina and the project’s lead researcher. Professor Anderson says his research as well as that of others is dependent on external grants, so The Blue Feet Foundation filled a funding gap.

“The problem is everybody is chasing a very limited amount of conservation money,” says Professor Anderson, who sported Blue Feet Foundation socks while working on the survey.

The website was up for three months before the Gladstone boys sold their first pair of socks. “We just wanted to shut it down at first because it wasn’t really going anywhere,” Will says. “We reached out to a lot of people and they wouldn’t take us seriously ... because we were just kids.”

Will’s initial email to the Galapagos Conservancy in March 2016 ended with this: “If it’s okay for me to list you as a partner on my website I will donate to you some of the profits when I start selling the socks. I’m going to sell a lot!!”

Lori Ulrich, director of membership and marketing at the Galapagos Conservancy, allowed Will to list the organization as a partner and use its logo, but had doubts:  “I openly admit that, when he first contacted me, I was sure I would never hear from him again,” she wrote in a reference letter for Will that she shared with the Monitor.

But being “just kids” comes with its own strengths. For Will and Matthew, it manifested in social media savvy.

They made an Instagram account for the foundation and started direct-messaging celebrities, hoping to turn them into sock-footed influencers who would put the word out to potential paying customers. At first, they messaged A-listers like Taylor Swift, but realized they were more successful targeting people who had posted photos of blue-footed boobies, or eco-centric social media stars, like Kody Antle, a caretaker at Myrtle Beach Safari wildlife preserve who has 1.5 million followers on Instagram.

Will and Matthew’s dad, Peter Gladstone, is a mentor at Harvard Innovation Labs, the university’s student startup incubator.

“I work with students all day who are trying to start businesses. I’m used to startups having trouble,” he says. “I just kept encouraging them to try different things to see what would happen. When they started hitting on social media as a way to get support is when they started to get some traction,” says Mr. Gladstone, who adds that his sons have largely spearheaded the foundation on their own.

Will says one of their biggest supporters is his longtime favorite hockey player, Boston Bruins defenseman Kevan Miller. Will messaged Mr. Miller on Instagram to explain the foundation and offer free socks. Mr. Miller responded with enthusiasm, and invited Will and Matthew to the Bruins locker room to meet the team and give out socks in October 2017. They brought their science teacher, Mr. Banister, along with them.

“It’s inspiring for me to see people going out and doing things like this that they’re passionate about,” Mr. Miller says.

The Gladstones attribute the foundation’s success to the power of the internet. “They literally created this lemonade stand on steroids,” Mr. Gladstone says.

Three years after forming the foundation, Will got to visit the Galápagos on a weeklong school trip in June. The students toured the Charles Darwin Foundation and met with the chief land bird researcher who also worked on the 2017 population survey. And Will finally got to see a blue-footed booby in person. “I was frantically looking around and when I saw one it was really cool,” Will said. “It was an awesome feeling.”

Back in Massachusetts, stuffing socks in envelopes each night started to get in the way of homework. The Gladstones now outsource their packing and shipping to a firm in Connecticut, except for extra-special orders. Aside from managing the foundation’s website and social media, Will runs for his school’s cross-country team and enjoys English and history. Matthew plays soccer, and his favorite class is science. Neither likes the question: “What do you want to be when you grow up?”

“I’m gonna save that for my older self to decide,” Matthew says.