In response to last week's U.N. report on climate change, people around the world – such as this Belgian sheep herder – are committing their lives to a sustainable future. Individual action can't replace large-scale change, many argue, but it can make a difference. 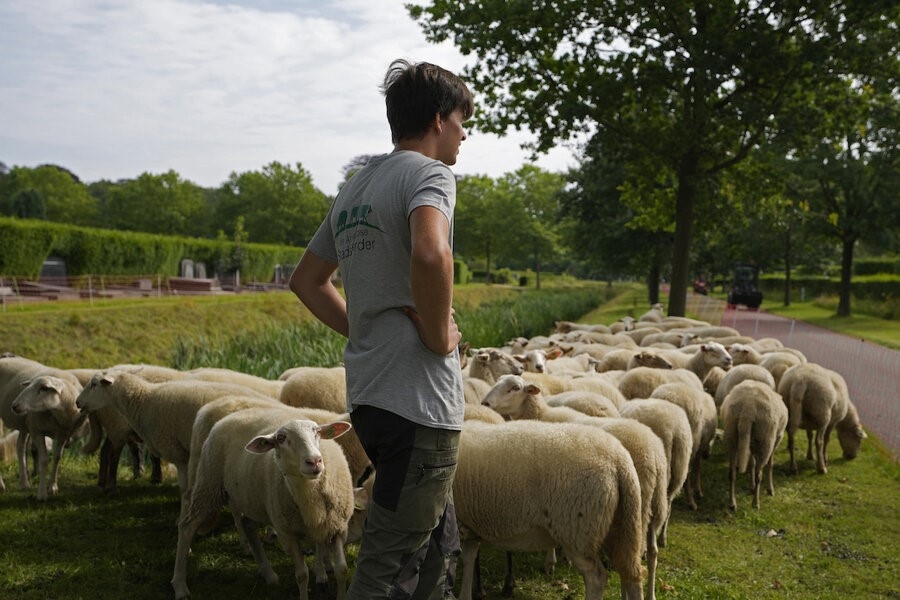 Belgian sheep herder Lukas Janssens tends to his flock at Schoonselhof cemetery in Hoboken, Belgium, Aug. 13, 2021. “We won’t stave [global warming] off with a flock of sheep,” Mr. Janssens said. “But it is another step to build a more ecological society.”Virginia Mayo/APYoung urban shepherd Lukas Janssens guides his flock among the graves in Schoonselhof, one of Belgium’s iconic cemeteries, knowing sheep are kinder to nature than lawnmowers.

“We won’t stave it off with a flock of sheep,” Mr. Janssens said of global warming. “But it is another step to build a more ecological society.”

Only days after the alarming U.N. report on climate change, the message of U.N. Secretary General Antonio Guterres was still stuck in his head – “code red for humanity,” with global warming threatening to choke the planet.

Even if Mr. Guterres’s words were aimed primarily at governments, investment managers, and asset owners, some citizens have known this day would come for decades.

Mr. Janssens is one of many who have taken on a very personal commitment to do something, along with those who refuse to fly, adapt their personal diet, or stay off school to protest on Fridays.

“I started as a shepherd because, together with the small sheep, I wanted to commit myself to society, to have a social goal beyond the production of meat, milk, or wool. I want them to be useful,” he said of his flock as they grazed the steep banks of a ditch running through the massive cemetery.

None of this might matter unless nations show similar commitment when they meet in Glasgow, Scotland, in November for the COP26 UN meeting on climate change.

Which begs the question: Are Mr. Janssens and his ilk 21st century Don Quixotes or the vanguard of a global Green revolution, that might help keep the planet from overheating?

At 24, Mr. Janssens has already seen his 3-year-old business expand rapidly as his venture has proved ripe for the climate-conscious times. “It cannot get bigger any faster than this,” he said. “It is more than a full-time profession.”

His choice of action might not be the one taken by all, but activists say as long as people do something, they can make a difference.

“Not everyone is going to become a shepherd of course. But it is great that there is such a variety of initiatives,” said bio-engineer Benjamin Clarysse of BBL, a confederation of environmental groups in northern Belgium.

And all together, he insisted, individuals might amount to more than the sum of their parts.

The challenges raised in the U.N. report are huge. It gives a guarantee that warming will get worse and insists it is “an established fact” that climate change clearly was human-caused. If that were not enough, a summer of exceptional floods, heatwaves, and wildfires from the U.S. west over much of Europe and north Africa to Siberia has added to that sinking feeling. Some of the flooding came as close as 35 miles (60 kilometers) to Mr. Janssens’ city pastures.

“I can imagine there was a sense of hopelessness among people,” said Pim Nusselder of the Dutch Milieu Centraal, a group promoting sustainable choices on anything from energy to waste and shopping. “Yet the longer we wait, the bigger and more expensive the challenge will become.”

He insisted small actions, if taken by enough people, could grow well beyond expectations, taking the population of the Netherlands as a cue. “I often get the question: What I do, is that not a tiny drop on a boiling plate? Well we have 17 million drops and if each does 10 sustainable things, you have 170 million drops on a hot plate. That is how you extinguish wildfires.”

Underscoring his view, a report this year by the EU’s statistical agency showed that people taking some personal action to combat climate change, whether on food or transport, has reached its highest level since 2011.

Greta Thunberg at first was a lonely teenager with her solo protests outside Sweden’s parliament in Stockholm. Now, she addresses political and business leaders at U.N. conferences and is feted by world leaders like European Union chief Ursula von der Leyen – even if they stop well short of following much of her advice.

Activists warn, though, that politicians should not shrug off responsibility on the individual. “They cannot just say that everyone should just do a little bit of the work. Depending on just the good will of people won’t get you there,” said bio-engineer Mr. Clarysse.

This story was reported by The Associated Press. Virginia Mayo in Hoboken and Frank Jordans in Berlin contributed to this report.