by Georgia from Los Angeles, California in United States

I shall be telling this with a sigh
Somewhere ages and ages hence:
Two roads diverged in a wood, and I -
I took the one less traveled by,
And that has made all the difference.

Mr. Frost rose from his chair and felt his stiff cold muscles protest as he began the walk to the podium. He clutched the sheets of paper he was carrying tightly in his hand, as the strong breeze tried to rip them from his grasp. His other hand rose to shield his eyes from the brilliant glare caused by the afternoon sun reflecting off the newly fallen snow.* Frost placed the papers on the podium, taking time to anchor down the edges with his hands. He adjusted his glasses and in a nervous voice began to speak. He lowered his eyes to the page, squinted and raised a hand to adjust his glasses again. The glare from the sun was making it hard to see the words on the paper.

"Summing---Summoning artists to participate
In the august occasions of the state
Seems something for us all to celebrate.
And---And today is for my cause a day of days.
And his be poetry's old-fashioned praise
Who was the one---Who was the first to think of such a thing.
This tribute---for to---to be his that here I bring
Is about---." †


There was uneasy silence as Mr. Frost stared down at his papers. Finally he said, "No, I'm not having a good light here at all" . And then, "I can't see in the sun". The vice president rose and used his top hat to try to shield the papers from the sun. When this was unsuccessful Frost came to the conclusion that he would be unable to read the poem "Dedication." Then he spoke to the assembled audience, "I think I'll say, this was to be a preface to the poem I can say to you without seeing it." This caused a burst of laughter as Mr. Frost proceeded to recite "The Gift Outright" to the audience.‡

Robert Frost's words touch every single person who reads them; they have become standard in schools and libraries. Despite problems at home and his rough start, he rose to become one of the greatest poets of all time. He had to exhibit courage, honor, inner strength and knowledge to do this. He's a hero of American Literature. Being asked to speak at the presidential inauguration was a tribute to his heroism.

Life wasn't always easy for our hero though; it took a lot of courage for him to choose to become a poet. And it was only the first choice of many Frost would have to make to become successful in his career.

After graduating second in his high school class, Frost entered Dartmouth, but dropped out after a few months because he thought the work was boring. He then completed a series of odd jobs. One of these was a bobbin boy in a Lawrence mill, a job which his grandfather, disgusted by Frost's apparent lack of ambition and unable to understand Frost's desire to write poetry, obtained for him. But the job as a bobbin boy didn't last. Like so many others, it came second to the poetry he continued to send to magazines like, "Scribner's," "Harper's," "Atlantic Monthly," and "Century"**.

In 1894, Frost published his first poem. Walking along a road, Frost bent down to examine a fragile butterfly wing nestled in-between the dry fallen leaves along the side of the road. The brilliant colors contrasting dramatically with the dry brown leaves inspired Frost to write, "My Butterfly." This poem was published in a local periodical called The Independent.

Frost decided to return to college at Harvard University. He spent two years as a special student there, but fatherhood caused him to leave. Frost supported his family by farming in West Derry, New Hampshire, and he continued to write the whole time. When a buyer for the farm turned up in 1912, Frost made the momentous decision to move his family to England. Maybe it wasn't so momentous a decision, for while Frost wanted to travel to Vancouver and work with John Bartlett, his wife, Eleanor, wanted to go to England. They tossed a coin, and England won (Thompson, 1981). Perhaps the coin knew what it was doing, though, because it was there Frost had his first real breakthrough with the publishing of "A Boy's Will."

Frost returned to America, a renowned poet. He continued farming and writing his poetry. Later, Frost taught at the colleges Amherst and Harvard. But what really made him popular was his "chatty, informal style of discussing his poems" (Magill, 1983). Later on in life he became known as a "cheerful, homespun philosopher" (Magill, 1983) despite his personal problems like his son committing suicide. Frost has been remembered to say that, "I've wanted to write down certain brute throat noises so that no one could miss them in my sentences" (Block, 1942). Also, he said about poems, "A poem begins with a lump in the throat; a homesickness or a love-sickness. It is a reaching out toward expression, an effort to find fulfillment. A complete poem is one where an emotion has found its thought and the thought has found the word" (Block, 1942).

In 1962, Frost traveled to the Soviet Union in hopes of convincing the Russian leader, Nikita Khrushchev, to give up "blackguarding" and "magnanimous rivalry" (Thompson, 1981). His heroism was remarked upon by August Heckscher, a special consultant on the arts to the White House. He said, "I am sure that on both sides of the Iron Curtain your visit will be long remembered" (Thompson, 1981).

Frost died in 1963 when the blood clots reached his lungs. He died of chronic cystitis. After his death, Frost was honored by being called "America's poet laureate," and the "national bard," and "the best loved poet in the United States"⹋. Frost was a man who had remained unknown for the first forty years of his life, but had reached the height of public opinion by the time he died. President Kennedy spoke of Frost with great respect. He said, "In America our heroes have customarily run to men of large accomplishments. But today this…country honors a man whose contribution was not to our size but to our spirit; not to our political beliefs but to our insight; not to our self-esteem, but to our self-comprehension" *** . His life hadn't been easy, but Robert Frost had accomplished his goal. His words will remain forever as an echo of his greatness in our memories. 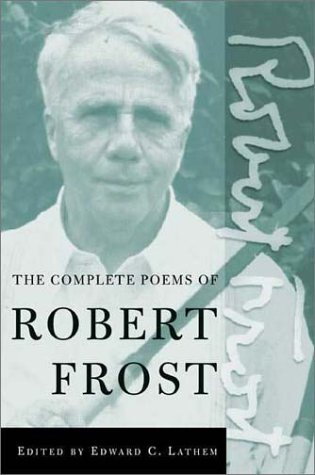 Stopping by Woods on a Snowy Evening