by Aryan Madan - Middle School - from Delhi in India 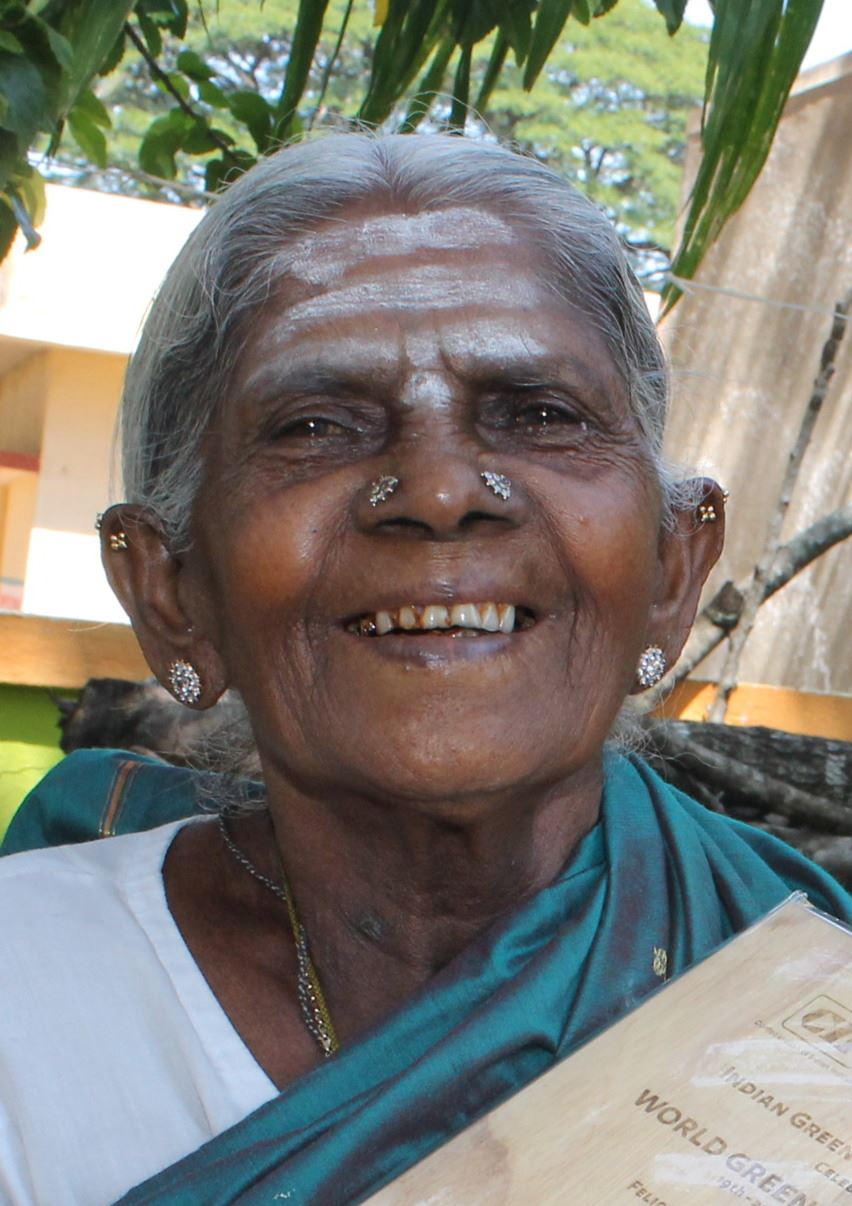 “You make a life out of what you have, not what you are missing.”

Saalumarada Thimmakka, The Green Crusader, has proved that if life has not blessed you with what your heart desires, create your own blessings.

Aalada Marada Thimakka, famously known as Saalumarada Thimmakka, is an Indian environmentalist who was born in Gubbi Taluk, Tumukuru District in Karnataka in 1910. She was born with no privilege and didn’t receive any formal education. At an early age, she had to take up grazing of sheep and cattle to earn her livelihood. She also worked as a coolie.

As she grew, she was married to Chikkaiah, a native of Hulikal village, but was barred from motherhood. A woman who cannot bear children is presumed to have no life. At the age of 40, she was tired, disappointed and indignant of her childless life and she tried to end her anguish by trying to commit suicide. There were pressures on her husband to seek another wife, but his love and affection towards her were so strong that he refused all proposals and started thinking of helping her out of her misery.

It was her husband to her salvation. He diverted her focus to nature and they both got hooked on caring for trees. Thankfully his attempt was successful and he was able to take her out from the turmoil. They both found the desired bliss of nurturing their own children in trees. They not only planted those trees, but also fenced, watered and guarded them as parents.

They used to carry four pails of water for a distance of 4 kilometres to water the saplings. They then refilled the pots from walls and ponds along the way. A total of 50 to 60 pots a day is really a tedious feat. But their selfless dedication towards trees kept them moving. They were in love with them so much that they planted 15 to 20 new plants every year. Overall, 8000 trees in 80 years have been planted with 400 of them being banyan trees.

This 110-year-old has the title bestowed “Vriksha Mathe” upon her, which means the mother of trees, because of her huge contribution to the environment. She is the oldest woman environmentalist and the title “Saalumarada” means a row of trees in Kannada.

Although Thimmakka’s passion was not backed by academic knowledge, her instincts for selecting the type of sapling are amazing, as she chooses trees rich in biodiversity. Her foresight of planting trees far apart across the road but close between in the rows is remarkable. This filled the whole 4 km stretch between Hulikal and Kudur with the greenery of trees.

Though the trees grown by her are worth several crores of rupees today and give us fresh oxygen to breathe, she never aspired to a wealthy life.
She always says, “Even one sapling each could make a better place for our children.” She is one of the most influential and inspirational women in the world.

Thimmakka has been conferred with the Padma Shri award in 2019, which is the highest civilian award in the republic of India. She also has been felicitated with numerous other awards like National Citizen’s award, Nadoja Award, BBC’s 100 women award, Vrikshamatha Award and Vishalakshi Award.

Not only this, there is an environmental organisation in the US called Thimmakka’s Resources for Environmental Education. The state of Karnataka got worldwide recognition because of its far-reaching contribution to environmental services.

The couple had to face social ridicule for not being able to bear children. Now she firmly believes that trees are the heir for her and will be a vital oxygen source for humanity for ages.

“I have enough children and my name will be taken for centuries.”

Now she is not only known in Karnataka or India. She has made her mark abroad too. Her mission is taken forward by her foster son, Sri Umesh. The mission is growing, and now they are planting trees along the roads, schools, and on the mountains and hilltops. Her son is also successfully running the PRITHVI BACHAO Movement.

She distributes free plants to the farmers, making a step towards a greener world. She is 110 years old and still cherishes the dream of planting more trees. Her contributions are truly commendable. She is the true hero to the entire world for spreading the light of hope and positivity.

Her contagious smile sends a strong message to us.

“It is during our darkest moment that we should focus to see the light. Keep smiling.”

She is the true epitome of resilience, determination and persistence of the common man, especially of women in our country.