FEBRUARY 24, 2020 - DADARA, ASSAM, INDIA - Dressed in bluejeans and a gray top, Purnima Devi Barman carefully balances her feet as she clambers down from the 80-foot-high bamboo platform. 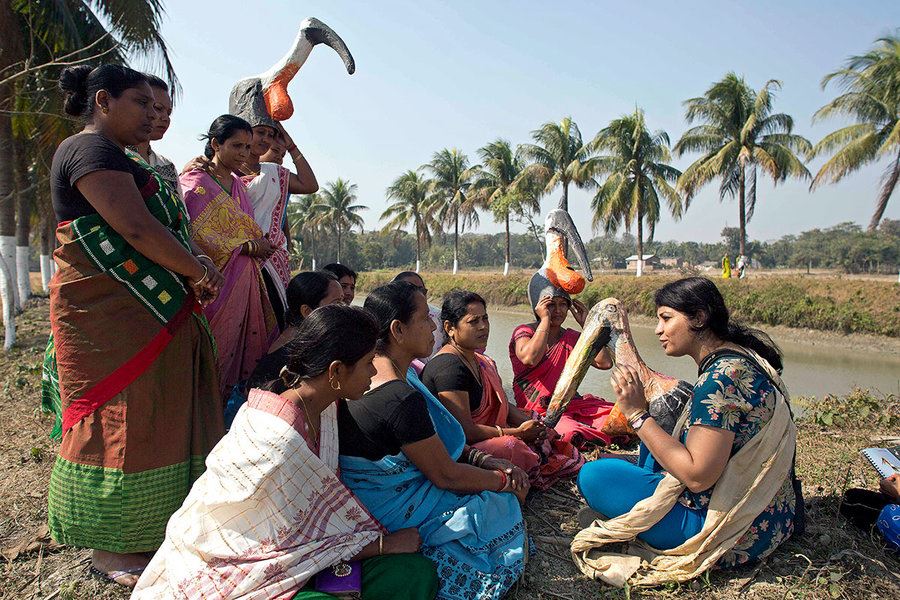 Purnima Devi Barman talks with women in Gauhati, India, about the endangered greater adjutant stork. Dr. Barman has led a community effort to protect the birds, which many villagers view as pests.Anumpan Nath

She’s been looking for greater adjutant storks: huge, plain-looking scavengers named for their stiff-legged, almost military gait. For years, the greater adjutants built their nests in tall trees fringing the shallow waters in uninhabited wetlands across Assam, one of their last habitats.

But early in her career as a conservationist, Dr. Barman noticed a change.

“When I started research with these storks for my Ph.D. program, I spotted very few storks compared to the large numbers I had seen as a child, growing up in rural Assam,” Dr. Barman says, recalling how her grandmother told her stories about different species and taught her how to identify them. Indeed, the stork is now endangered, according to the International Union for Conservation of Nature’s Red List of Threatened Species, with only 800 to 1,200 mature birds left in the world – most of them in Assam.

The birds’ wetlands are fast disappearing, replaced by buildings, roads, and cellphone towers as the region quickly urbanizes. That means the storks are forced to look for trees next to the homes of villagers, where they’re often far from welcome.

Hargilas, they are called in Assamese: “bone swallowers.” Many residents here in the villages of Dadara and Pacharia object to the rotting flesh hargilaseat, and their smelly droppings soiling gardens. They see the birds as such a bad omen that they are even willing to chop down magnificent old trees in their backyards to get rid of the nests. Dr. Barman once saw nine baby birds fall to the ground when a villager chopped down a tree with many nesting storks.

“I delayed my Ph.D.,” she says, “and focused more on keeping the bird alive in its habitat. Most people worked with charismatic species like the rhino or the elephant, but the hargila needed to be conserved, too.” 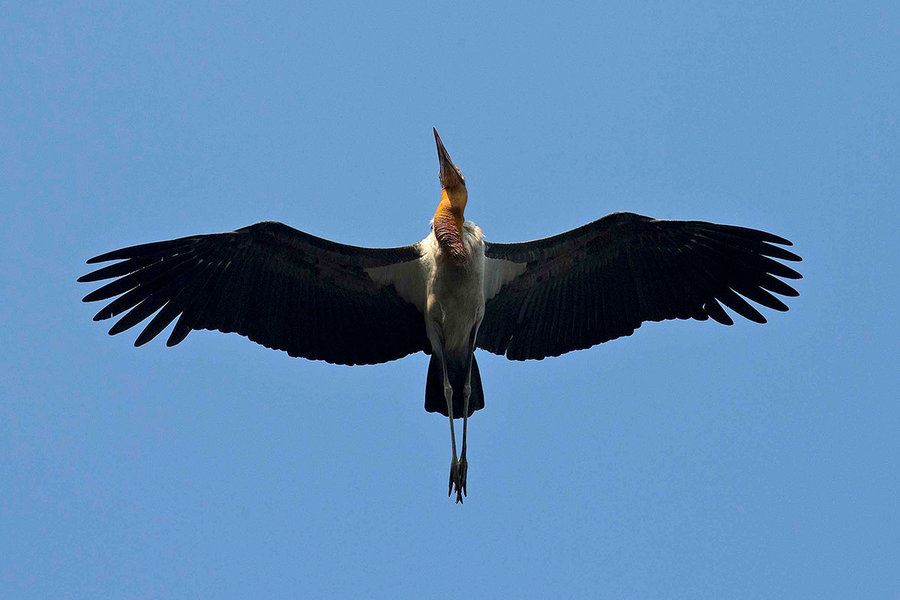 A greater adjutant stork, an endangered species, flies in Dadara village, west of Gauhati, India, on Nov. 25, 2016. A group of women who call themselves the "hargila army," after the bird's name in the local Assamese language, is creating awareness to protect the scavenger bird.Anupam Nath/AP/File

And one of the most important tools to do that, she discovered, was shifting attitudes toward the storks – one stork baby shower, dress, or prayer at a time.

Back in 2007, when Dr. Barman tried to stop a villager from cutting down storks’ trees, she was taken aback by his anger. Others laughed when she told them that the greater adjutant was endangered and needed to be conserved.

“I realized that it wasn’t the people’s fault. They were completely unaware about the ecological significance of the endangered stork,” Dr. Barman says. She recognized that to raise awareness, she needed to involve residents in the conservation process and make the bird a symbol of pride.

Shortly afterward, Dr. Barman mobilized a large number of women from the village and spoke to them about the importance of these birds and their dwindling population. She organized drawing competitions among the children, and cooking competitions, where the women would prepare the traditional Assamese rice cakes or pithas, and round-shaped laddoos, or sweets.

The “hargila army,” she called the volunteers. Dr. Barman became known as “hargila baideu,” or stork sister. More than 400 women are members of the hargila army, and 200 are actively involved in the conservation process today. They help rehabilitate injured storks that fall off their nests, boost awareness, and create motifs of hargilas in traditional Assamese hand-woven gamosa towels and mekhela sador dresses, which are often sold to tourists.

“I have been a member of hargila army since 2007,” says Sangeeta Das, a friendly woman from Dadara. “Initially we thought that the hargila was a dirty bird because it ate dead fish and dirtied the backyards. ... However, when Purnima baideu explained to us about the importance of this bird, we realized how endangered this bird is and that we need to conserve it. Eventually it became a symbol of pride for us.”

Today, Dr. Barman is a project manager at the Indian nonprofit Aaranyak, coordinating its community conservation initiative. She has tried to make the hargila army’s women financially independent by providing them with looms and thread to weave. The local district administration and the police have also supported her project, providing transport, looms, and nets to catch fallen birds. “I believe women’s empowerment is very important to make them a part of the conservation efforts. Also, I had to develop a strong bond of friendship with the women to make them aware and sensitize them,” says Dr. Barman.

Her efforts are beginning to bear fruit. The hargilas are now finding a place in poems and songs sung during prayer meetings in the community prayer halls. A statue of the hargila has been made and displayed in the village. And during the breeding season, women even conduct a panchamrit ceremony for the birds – traditionally done to fete an expectant mother.

“Panchamrit is a mix of five ingredients: cow’s milk, yogurt, honey, sugar, and clarified butter. There are celebrations, prayers, and merrymaking,” explains Mamoni Malakar, a hargila army member. “After the baby birds are born, a baby shower is also organized in the temples or community halls. A cake is cut, the women discuss and spread awareness about the bird in the village, and there are prayers offered for the well-being of the birds.”

Now, the wide-wing-spanned birds are regularly seen perched on tall trees and high up in the skies of Dadara. Since 2007, Dr. Barman says, the number of hargila nests in these villages has risen from just 28 to more than 200.

“Purnima has given a completely new dimension to the conservation process by making the entire community interested and involved,” says Parimal Chandra Bhattacharjee, trustee and vice chairman of the Wildlife Trust of India and retired head of the department of zoology at Gauhati University. “It wouldn’t be possible to protect the endangered hargila without the society’s involvement.”

The conservationist has received several awards, including the Whitley Award, known as the “Green Oscars.” She is also a recipient of the India Biodiversity Award from the United Nations Development Program and the Nari Shakti Puraskar, India’s highest civilian honor for women.

However, Dr. Barman knows that her task is far from over. “I want to work on the conservation of the hargila forever,” she says. “A lot more needs to be done and this is a difficult, continuous process.”