by Ryan Hsu from San Diego, California in United States

Difficulties are just things to overcome, after all.

Superhuman effort isn't worth a damn unless it achieves results.

We had seen God in His splendors, heard the text that Nature renders. We had reached the naked soul of man. 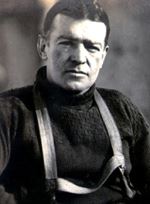 Sir Ernest Shackletonhttps://www.bbc.co.uk/history/historic_figures/shackleton_ernest.shtmlThe thirtieth president of the United States, Calvin Coolidge, once stated that, “Heroism is not only in the man, but in the occasion” (Address Dedicating a Memorial to Col. William Colvill, Cannon Falls, Minnesota). This quote from President Coolidge implies that heroism is defined by a combination of the time and place in which heroic actions take place, along with an individual’s ability to execute his or her heroic actions. In thinking this way, heroism is thus dependent on occasion. However, simply defining actions in one specific event is a flawed approach to identifying heroism. Instead, it is the legacy of these heroic actions that must be recognized in order to completely interpret heroism. What impact did these acts of heroism have not only in the occasion, but also how do these actions live on in today’s society? The trait of heroism is a hallmark of those whose actions represent the pinnacle of human aspiration. Therefore, heroic actions must craft a legacy that society should strive to achieve on any occasion.

Rarely have people throughout history achieved the prestige associated with leaving a heroic legacy. One of these few elite heroes is Sir Ernest Shackleton, regarded as the greatest Antarctic explorer of all time. Shackleton was an Irish explorer born with a knack for stellar leadership, a blessing that few men throughout history have been gifted. Throughout his lifetime, Shackleton partook in four major expeditions to the Antarctic, and yet surprisingly, his fame arose not from the successes of his travels, but from his failures. Quite possibly the most infamous story of survival was born from the failure of Shackleton’s third Antarctic expedition, named “The Trans-Imperial Antarctic Expedition”. A few months into their voyage to the Antarctic, Shackleton's ship, the Endurance became trapped in the pack ice of the Weddell Sea, and was crushed in October of 1915. Left alone on the ice, Shackleton and his crew commenced an epic journey to find rescue 920 miles away in the form of South Georgia Island. The Endurance crew spent nearly seven months on the ice and in 22-foot long boats in their quest for survival. Despite battling the brutal conditions of the Antarctic seas, Shackleton and a few others arrived at South Georgia on May 19, leading to the rescue of the Endurance crew in August of 1916, who remained behind on the edge of the continent: “I have done it. Damn the Admiralty. . . . Not a lost life and we have been through Hell” (Alexander 185). Shackleton himself summarizes the crowning accomplishment of his legacy; leading his entire crew to rescue from the Antarctic without losing a single man. Henceforth, Shackleton’s first criteria of heroism is his unparalleled leadership, as without the leadership of Shackleton, the Endurance crew would have easily died in the frozen wasteland of Antarctica. This leads to Shackleton’s second criteria of heroism, which is his upholding of responsibility. Shackleton forced upon himself the responsibility over each member of the crew’s life; his actions as a sole individual ultimately saved the lives of three crew members purely because Shackleton upheld his responsibility. Because of his actions, the survival of the Endurance crew is a testament to Shackleton’s heroic legacy, which is defined by his unparalleled leadership and upholding of responsibility. 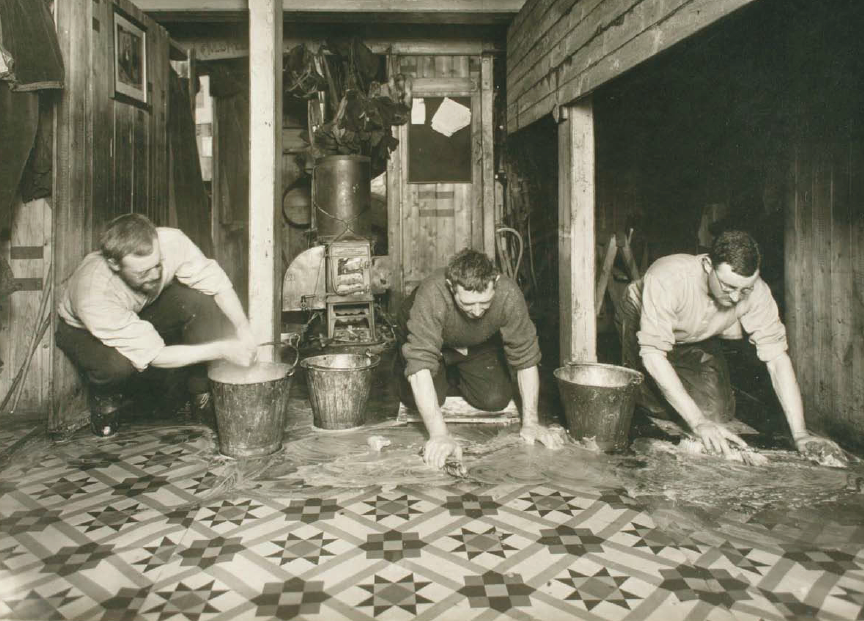 Scrubbing the mess hallhttps://www.quartoknows.com/blog/quartoexplores/2017/05/10/aboard-endurance-expedition-ice/ Shackleton’s incredible leadership stems from his ability to develop mutual respect and trust between himself and his crew; without this, none of his men would have survived. Shackleton gained the respect and trust of his men by making decisions that valued the crew’s safety and well-being as a top priority: “Shackleton did not believe in unnecessary discipline, and yet ultimately nothing happened without his consent. He was known above all to be fair, and so commands were obeyed not only because they were commands, but because they were generally reasonable” (Lansing 56). In not practicing strict disciplinary measures, Shackleton developed a strong bond of trust with his crew. This bond of trust was then bolstered by the fairness exhibited by Shackleton. Because of this, the crew respected the decisions Shackleton made as a leader and trusted that these decisions were in the best interests of the crew. The formation of respect and trust between all crew members led to survival in many cases in which uncertainty or distrust would have meant death, therefore demonstrating why Shackleton’s legacy is renowned for his leadership abilities. Shackleton's heroic legacy is thus defined by his leadership, as it was a contributing factor in to his crew’s survival. In addition to his decisions, Shackleton demonstrated his desire to earn trust and respect through his actions, rather than from using his position as an authority figure. “[Shackleton insisted] on having exactly the same treatment, food, and clothing. He went out of his way to demonstrate his willingness to do the menial chores...And occasionally became furious when he discovered that the cook had given him preferential treatment because he was the ‘Boss’” (107). Considering that Shackleton had to practically order his men to treat him without bias, it is not a stretch to see that Shackleton was a leader with great humility and self-awareness. People in places of leadership commonly have a tendency to think of themselves as above their subordinates, however for Shackleton, this was not the case. He did unwanted chores and resisted the traditional luxuries that leadership entails, and these actions exemplified to his men that he was one of them, a comrade, and not a superior. The extra steps Shackleton took to secure his position of leadership embodies the epitome of a brilliant leader, which time and time again proved vital for the crew in their quest for survival, ultimately demonstrating the heroicness of Shackleton’s leadership capabilities. 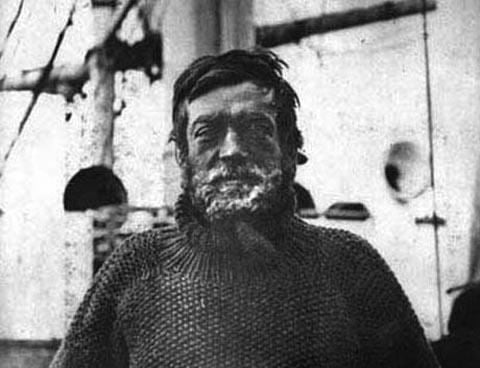 Moving across the icehttps://history.sffs.org/films/film_details.php?id=1555Shackleton’s undying devotion to the Endurance crew coupled with his duty as a leader led him to solely bear the responsibility of returning the crew to safety. Shackleton almost suffered from an obsessive need for vigilance, frequently watching over his crew despite disbanding the watchman system implemented at the beginning of his journey. This behavior, although tiresome for Shackleton, resulted in preventing the death of Thomas Holness, thus justifying his obsession: “...it was Sir Ernest himself who rescued Holness. No doubt he was spending one of his usual wakeful nights and so was up and out in an instant. First he saved Holness's sleeping bag and then the man himself, whose chief lament was that he had thus lost all the ‘baccy’ out of his bag” (Orde-Lees). In this diary entry, Orde-Lees conveys the true nature of Shackleton’s vigilance through his reference to Shackleton’s constant overwatch of the camp. Orde-Lees’ account of Shackleton’s actions illustrates his leader’s utmost devotion to the responsibility he bore, as Shackleton saved not only Holness, but Holness’ gear as well; which if not possessed, would surely have led to death by hypothermia shortly after. In this short event, Shackleton exemplifies how his heroic adherence to responsibility was a defining factor in life and death on the crew’s journey of survival. This drive borne from responsibility inevitably pushed Shackleton to find his deepest strength and energy: “Shackleton ordered a brief rest, and within minutes Worsley and Crean had sunk down upon the snow and fallen asleep in each other’s arms for warmth. Shackleton remained awake. ‘[From Shackleton’s account] I realized it would be disastrous if we all slumbered together,’ he wrote, ‘for sleep under such conditions merges into death’” (Alexander 162). The sheer amount of willpower Shackleton used to stay awake for those five minutes was driven purely from his dedication to the responsibility he bore nearly a year before. Shackleton’s devotion is what saved his crew from certain death, because if Shackleton, Worsley, and Crean had perished, then rescue would have never arrived for their other crew members. The fact that no member of the Endurance crew died is a lasting reminder that without Shackleton’s heroic adherence to his responsibilities, men would have certainly died in their struggle for survival.

News Headline for The Endurancehttps://www.rochellepenningtonbooks.com/theendurance.htmlThe members of the Endurance crew act as a symbol, which exemplifies the full extent of Shackleton’s triumphs as a leader and a man of responsibility. Shackleton himself puts it best in stating, “If you’re a leader, a fellow that other fellows look to, you’ve got to keep going” (Shackleton 57). In saying this, Shackleton reveals the nature of his integrity as a leader, as an explorer, and as a man. It is the adherence to leadership, and to responsibility that are the driving force behind the actions that have forged Shackleton’s legacy as a hero. This reveals something larger, that behind any hero is an unbreakable commitment to values that people, that society views as heroic. However, the vast majority of society does not possess Shackleton’s god-given gift of leadership or the natural drive to stand by or defend values. Shackleton’s leadership ability and how he upheld it is simply the pinnacle of human leadership. Therefore, Shackleton represents an aspiration of what to become; a symbol that inspires society to strive to follow in the legendary explorer’s footsteps. It is impossible to replicate the insurmountable challenges that Shackleton overcame, but it is possible to apply the same methods he used to surmount these obstacles in everyday life. By aspiring to take initiative and lead others toward a common goal, and to dedicate oneself solely toward achieving said goal, then Shackleton’s heroic legacy lives on. The facade of occasion is so commonly associated with heroism. Instead, one must look past this occasion and at the legacy upon which these acts of heroism have created. In doing so, the true nature of heroism is revealed; it is the legacies forged by heroism that embody a pure iteration of the actions performed by the heroes of the past, present, and future.