Satellites launched by Elon Musk’s SpaceX are sometimes mistaken for UFOs. The error is easily corrected, but astronomers see other problems with the “industrialization of space.” Light pollution can spoil a clear view of the night sky, even obscuring scientific data.

MAY 10, 2021 - PHILADELPHIA - A string of lights that lobbed across the night sky in parts of the United States on Wednesday, Thursday, and Friday had some people wondering if a fleet of UFOs was coming, but it had others – mostly amateur stargazers and professional astronomers – lamenting the industrialization of space. 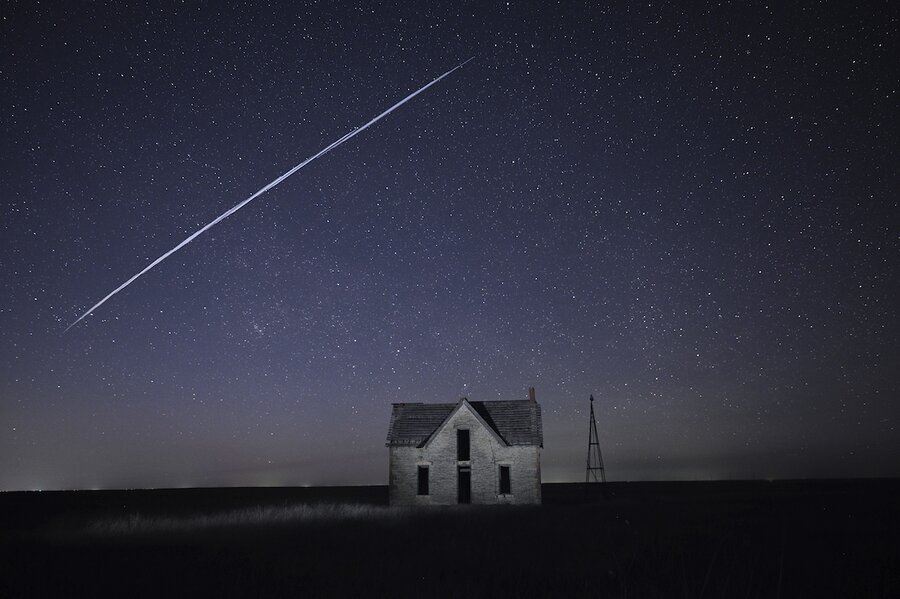 This long-exposure photo shows a string of SpaceX StarLink satellites passing over a house near Florence, Kansas, May 6, 2021. Observers swamped TV stations from Texas to Wisconsin reporting the lights and musings about UFOs.Reed Hoffmann/AP

The train of lights was actually a series of relatively low-flying satellites launched by Elon Musk’s SpaceX as part of its Starlink internet service earlier this week. Callers swamped TV stations from Texas to Wisconsin reporting the lights and musing about UFOs.

An email to a spokesman for SpaceX was not returned Saturday, but astronomy experts said the number of lights in quick succession and their distance from Earth made them easily identifiable as Starlink satellites for those who are used to seeing them.

“The way you can tell they are Starlink satellites is they are like a string of pearls, these lights travelling in the same basic orbit, one right after the other,” said Dr. Richard Fienberg, press officer for the American Astronomical Society.

Dr. Fienberg said the satellites that are being launched in large groups called constellations string together when they orbit, especially right after launching. The strings get smaller as time goes on.

This month, SpaceX has already launched dozens of satellites. It is all part of a plan to bridge the digital divide and bring internet access to underserved areas of the world, with SpaceX tentatively scheduled to launch another 120 satellites later in the month. Overall, the company has sent about 1,500 satellites into orbit and has asked for permission to launch thousands more.

But prior to recent years, there were maybe a few hundred satellites total orbiting Earth, mostly visible as individual lights moving across the sky, Dr. Fienberg said. The other handful of companies that are planning to or have launched the satellite constellations have not launched recently and largely pushed them into orbit at a farther distance from Earth, he said.

Dr. Fienberg’s group as well as others that represent both professional and amateur stargazers don’t love the proliferation of satellites that can obscure scientific data and ruin a clear night of watching the universe. The International Astronomical Union issued a statement in July 2019 noting concern about the multiple satellite launches.

“The organization, in general, embraces the principle of a dark and radio-quiet sky as not only essential to advancing our understanding of the Universe of which we are a part, but also as a resource for all humanity and for the protection of nocturnal wildlife,” the union’s representatives wrote. They noted that light reflection can interfere with astronomical research, but the radio-waves can also cause problems for specialized research equipment such as those that captured the first images of a black hole.

Dr. Fienberg said there is no real regulation of light pollution from satellites, but SpaceX has voluntarily worked to mitigate that by creating visors that dampen the satellites’ reflection of sunlight. They’ve made significant progress in just two years, he said, but many hope that the satellites will some day be at such a low magnitude that they will not be visible to the naked eye even at dusk or dawn.

Dr. Fienberg noted a massive telescope being built in Chile, costing millions of dollars and a decade of planning. The telescope will capture a huge swath of the sky in the Southern hemisphere and take continual pictures to record a sort of movie that will show the universe changing. Because of its size, nearly eight meters across, the massive telescope could also lead to the discovery of dimmer objects in the night sky, he said.

The plan is for the telescope to start recording in 2023. And with plans for thousands of satellites, Dr. Fienberg said it’s hard to imagine that they won’t cause issues with the data since there’s no way to correct for their lights and know what amount of light should be emitted from any dimmer objects behind the path of the satellites, which could also create ghost images in the data.

“We’re talking with companies now and hoping to continue to make progress, and potentially by the time it goes into operation, have tools and techniques to correct for the lights and perhaps fainter satellites,” Dr. Fienberg said. “We can’t say this is wrong and you have to stop because the point is to provide internet access to the whole globe. It’s an admirable goal, that we would support, if it didn’t mean giving up something else ... the night sky.”