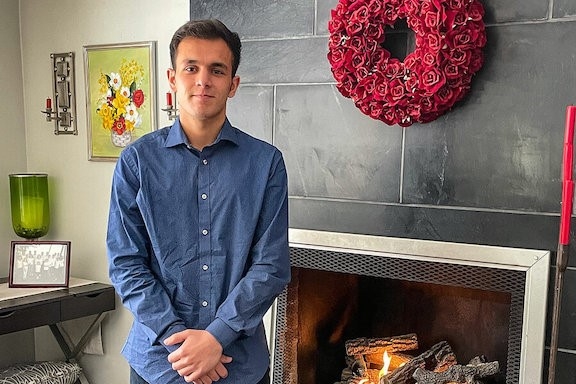 Mohammad Agha Mohammadi fled Afghanistan when the Taliban took over in August. He is beginning a new life in the United States with support from the Sponsor Circle. Cathryn J. Prince

When Mohammad Agha Mohammadi made Qabili palau, the national dish of Afghanistan, he called his mother. He wanted to make sure he had the right balance of cardamom and cumin.

“I speak to my parents every day. I text them also,” Mr. Mohammadi says.

For now, phone calls and texts will have to suffice. His parents and five siblings remain stuck in Kabul, and he doesn’t know when they will be reunited.

Mr. Mohammadi, age 20, is one of more than 80,000 Afghans airlifted to the United States after Afghanistan fell to the Taliban last August. He is also one of nearly 360 Afghans being helped through the Sponsor Circle Program for Afghan refugees, a pioneering resettlement program that invites everyday Americans like Gerard and Eileen Monaghan of New Milford to get involved.

“I know people say we are a melting pot, but I think we are more like a stew. All the individuals who come here are making the country a better place,” Mr. Monaghan says.

Each circle is made up of at least five adults in the same community. After passing a background check, those people help individuals access housing, enroll children in school, and find jobs and English classes if needed. Each circle must raise a minimum of $2,275 per refugee it welcomes.

The Monaghans and their circle raised more than $6,000 for clothes, school, and a car for when Mr. Mohammadi gets his driver’s license so he can eventually drive to school.

“Mohammad asked me why I’m doing this. I told him I can’t do anything for the millions there who are starving and have hardship, but I can take you and get you going. It’s a drop in the bucket. But it’s a drop,” Ms. Monaghan says.

Developed in partnership with the Community Sponsorship Hub (CSH), a project of the Rockefeller Philanthropy Advisers, the U.S. State Department-supported program was born of necessity.

Traditionally, refugees and humanitarian paroles go through the U.S. resettlement network, which was established via the 1980 Refugee Resettlement Act. During the Trump administration, about one-third of the 200 resettlement agencies closed, as the cap on refugees to the U.S. was reduced to an all-time low. The network was decimated, says Isabel Burton, senior director of community engagement initiatives at the HIAS, which helps resettle refugees around the world.

“When Afghanistan fell we [HIAS] only had the capacity to resettle about 35,000. So we looked around and asked how we fill that gap,” Ms. Burton says. “The answer lay in Sponsor Circles, an idea that was already gaining traction among those in the resettlement community. We sped the program up and pulled out all the stops.” 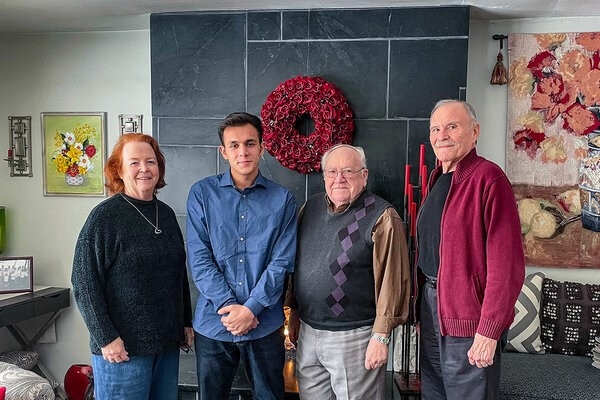 “I hope this opportunity to welcome Afghans is something that can embed this value of welcome in communities and states across the country in a much more profound way than currently exists,” Sasha Chanoff, CEO and founder of the nonprofit RefugePoint and a recipient of The Charles Bronfman Prize for humanitarian work, says. “The idea for the program is that it expands to helping other refugee populations.”

Mr. Mohammadi was born in Tehran, Iran, where his parents had sought refuge during the first Taliban era. That was in 2001, shortly before the U.S. invaded Afghanistan. Two years later, the family returned to Kabul.

In 2018 Mr. Mohammadi became the first in his family to finish high school. Having learned English in school, he started taking Chinese-language lessons at a private university. His father continued to work at a local K-8 private school for girls and boys. His mother was busy with his siblings, the youngest of whom is 5.

“Until a week before the Taliban came we didn’t think of leaving,” Mr. Mohammadi says.

On Aug. 25, Mr. Mohammadi and his cousin made their way to Hamid Karzai International Airport.

“It was 10 o’clock at night. My father told me to go. I took my clothes and documents. That’s it. There was no time,” Mr. Mohammadi says.

The rest of the family planned to join him the following night. But the airport closed when a suicide bomber struck outside the Abbey Gate, killing 170 civilians and 13 U.S. service members.

A few days later Mr. Mohammadi and his cousin were sitting on the floor of a C-17 with several hundred other people. The plane refueled in Kuwait before landing at Fort Pickett, Virginia, on Sept. 1.

“I met a lot of people. The Marines were nice. The thing that I noticed was the humanity of the people and the freedom here,” Mr. Mohammadi says.

As kind as the U.S. Marines were and as safe as he felt, he grew impatient to go beyond the base. After five months of awaiting screening and resettlement instructions he learned he’d be leaving.The Monaghans picked up Mr. Mohammadi at Bradley International Airport shortly after noon on Jan. 29. He had been up since 2 a.m. His first meal with them was a McDonald’s spicy chicken sandwich. One month later, he’s been settling in.

One of the first things Mr. Mohammadi got when he arrived in this small Connecticut town on the banks of the Housatonic River was a library card.

He’s since gotten his Social Security card, and enrolled in health insurance and SNAP. He also has his learner’s permit and is practicing driving. He will enroll in summer classes at Western Connecticut State University, putting him one step closer to getting his undergraduate degree in accounting.

Although he and the Monaghans spend a couple of hours every day making plans and phone calls, he’s found time for a bit of travel.

“He was a little nervous about the train, but I said if you could get out of Kabul you can get on Amtrak,” Ms. Monaghan says.

He’s also visited a cousin in Lenox, Massachusetts, and the Monaghans’ son in Boston.

“I love Boston. I want to go to Harvard for my MBA,” he says.

More help on the way?

Now that the first phase of Operation Allies Welcome is complete – the last Afghans left military bases early February – RefugePoint is focused on the next phase of this operation. The U.S. government will continue welcoming Afghans from overseas safe havens, who have been fully screened and vetted, to a domestic facility.

While Afghans who worked with the U.S. government received Special Immigrant Visas allowing them permanent residency and federal funds to help begin anew, others like Mr. Mohammadi are humanitarian paroles. This means they can stay in the U.S. for up to two years. Advocates are lobbying Congress to pass the Afghan Adjustment Act, which would expand the qualifications for blanket refugee status to more evacuees – like Mr. Mohammadi.

Between making calls to advance paperwork and find a job, Mr. Mohammadi plays Monopoly and Uno. He’s bonded with Mr. Monaghan over “The Outpost” – a film adapted from Jake Tapper’s book – and the movie “We Were Soldiers Once and Young.”

“I look at Mohammad and I can see the great things he will do here,” Mr. Monaghan says.