Building a Better Future and Awakening Heroes in the Hearts of Communities in Need: Techo and Techo para Aprender Are There

by Annie Merkley from Santiago, Chile

A flicker. A spark. This is how a movements starts. Three University students and a Jesuit priest set out to help a poverty-stricken community in the south of Chile over 20 years ago. They went to help build transitory housing for those without homes. After this initial project was done, the students and priest Felipe Berríos realized the overwhelming need for shelter their country. Techo (or “Roof” in English, as the non-profit organization is now known) is located in 19 countries throughout Latin America and the Caribbean. From four people wanting to lend a hand in one community back in 1997, Techo in 2019 has had over a million volunteers help build over one hundred thousand houses. Its aim is to combat poverty and exclusion by building just and sustainable cities, and, ultimately, to eradicate poverty entirely.

A group of volunteers in front of a "mediagua"-transitional housingTechoPeople in areas of need wanted to improve their surroundings, but didn’t have the funds or knowhow to build and change the infrastructure—Techo stepped in as a catalyst, empowering communities and giving them the tools to take on brave leadership roles. Techo also mobilizes young volunteers from outside of the slums to pick up hammers and help build more inclusive dwellings from the ground up.

Techo para Chile has expanded their outreach program to give children a safe space to learn and play. Techo para Aprender (A Roof to Learn), as an idea, was born in 2017 and is now up and running, training women of these impoverished communities as coordinators and teachers. It’s offering quality education for free in areas of extreme need, where the access to valuable education is crucial for opening up opportunities that the youth of these marginalized areas wouldn’t otherwise receive.

Recently on a sunny winter day at Techo’s head offices in San Joaquín, a municipality of Greater Santiago, Chile, I had the opportunity to sit down with a couple members of the Techo team: Catalina Fuenzalida, 28, head of Techo para Aprender; and Constanza Parraguez, 30, director of social programs. They spoke passionately about their work and how Techo and Techo para Aprender came about.

They concurred that priest Felipe Barríos and the initial students from Universidad Católica back in 1997 had no idea that Techo's scale would be what it is today. After they went to Curanilahue, a town in the south of Chile to build transitional houses, they started to seek out funding. They contacted Hogar de Cristo (a large and well-known nonprofit organization in Chile founded in 1944) and were donated materials for “mediaguas,” the 3x6-meter wooden transitional houses. Extreme poverty was more severe then than now, and there were many families without shelter.

Parraguez added, “It was winter, and, in the south of Chile it rains a lot.” She said that life was very difficult for the families in these informal settlements during the colder months.

When asked how Techo has been so successful over the years, Fuenzalida said that one of the keys was the non-profit's enduring presence. She said, “The volunteers systematically and regularly assist the community. It’s not like they go once and then disappear, there is constant work with the informal settlement leaders… What they are looking to do is to strengthen the community organization [from within] and have active participation… It’s not just a project. We are together on this path to achieve permanent housing, and more. That was always the initial objective. We know that this path is a long one.” She said emphatically that Techo is in it for the long haul, not just for a quick fix.

You could tell that Fuenzalida felt it to the bone, nodding her head as she spoke, her expressive hands splayed in the air. She conveyed the feeling that Techo is succeeding in making real changes, and it is not going away.

Techo’s plan of attack is no Band-Aid on a broken leg. It is trying to end poverty by starting at the front line. By digging its heels in and staying in communities, it has been transitioning from transitional housing to permanent habitats, to social outreach programs. It metamorphoses and grows as it goes.

Parraguez revealed that Techo has several branches, and one of these is the area of social programs—which include bettering infrastructure, recycling, education, and training projects. She said, “We already have five programs in operation and one of those programs is Techo para Aprender.”

Other countries are welcome to copy the model of Techo para Aprender, Parraguez explained, but at the end of the day, it’s up to each individual country involved in Techo to make their own decisions. 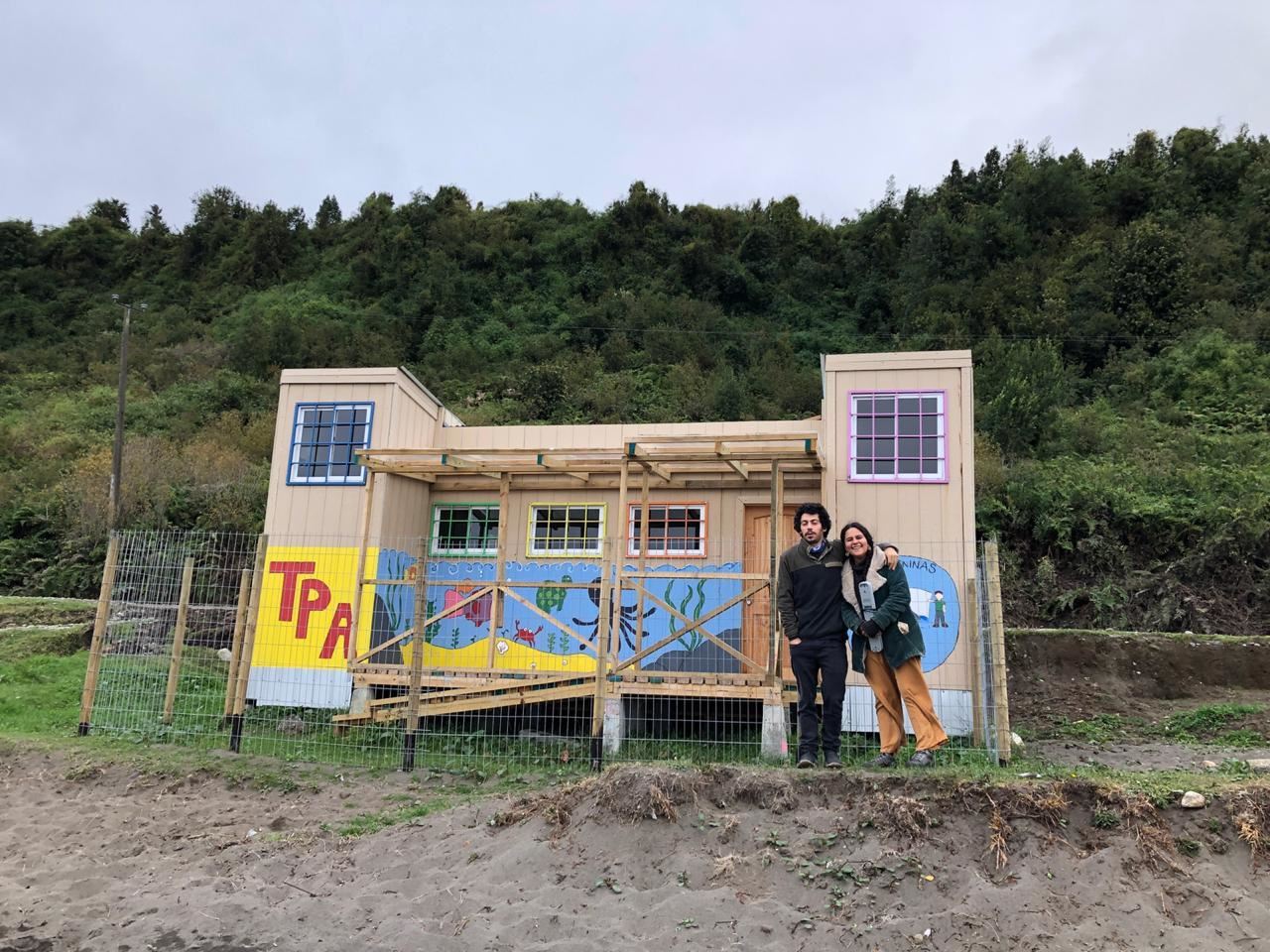 Techo Para Aprender Community Center TechoTecho para Aprender has a focus on training female community leaders and started in four informal settlements in the Santiago Metropolitan Region, which has now spread to the south, in the Los Lagos and El Río regions. Techo already had head offices in many of these impoverished areas to hold meetings to talk about projects. If the headquarter structures were sufficient for classes as well, than Techo para Aprender organized classes to be held there; if not, they started building community centers. The women-led community centers are especially exceptional due to the fact that Chile is still very much a patriarchal society.

These centers are overflowing with good stuff going on—they are places where women of the communities are trained to be in charge of educational programs and teach, where teachers from local high schools and universities come to volunteer and give their expertise in pedagogy, and children ages 4-16 get together for classes and activities at least twice a week. It gets them off the streets or makes them feel welcomed into a productive, inclusive environment. Fuenzalida said they are working on offering after school classes Monday through Friday and having Saturday classes as well.

Fuenzalida’s love for the project was palpable; it radiated off of her as she spoke.

She added that Techo para Aprender is doing what is does, “because we see that there are few spaces for children in the communities…The squares are more dangerous spaces when night falls, and the houses are not appropriate for studying. They’re mostly not suitable either due to [lack of] electricity, or a desk, or because of overcrowding and so on. The idea is to have a space for children, a space where they are the protagonists.” Fuenzalida continued, “It is the neighborhood coordinators that make the programs… They are the ones that make this work.”

When asked who the heroes of Techo para Aprender are, Fuenzalida said that the answer was easy. She said without a doubt, it would be the female coordinators based in the communities, the directors and managers, in the front line. 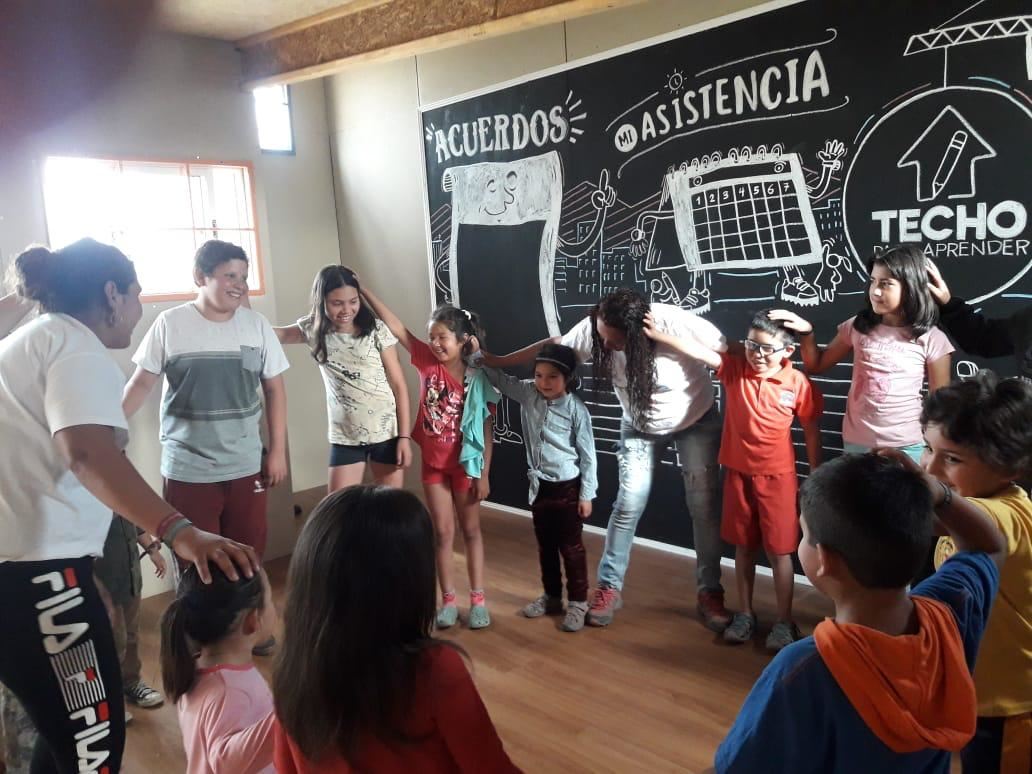 Teachers and students in a Techo para Aprender Community CenterTechoFuenzalida expressed that the volunteers from outside of the slums are key players, facilitators in fact, and that Techo para Aprender couldn’t be sustained without them. “However,” she said, “the heroes, the real heroes …are those in the community…the women that lead the educational programs. And, we have realized without motivated coordinators, the project dies… But if we have one person, a neighbor or two, or three, hopefully who are interested in developing educational programs for free, it prevails!”

“Si!” Parraguez exclaimed as she gratefully pressed her hand to her chest. She said unequivocally, “For me, in terms of the institution [Techo] in general, it’s the families in the end. You don’t get to do anything in the communities if the families don’t want these things to happen… if the motivation and desire doesn't come from them, nothing works.”

Since 1997, Techo has opened doors, broken down barriers, and influenced people in their own communities to find their voices and become advocates. The project and its humble beginnings has had an astonishing domino effect. The contagious desire to invoke the heroic hearts of committed coordinators in impoverished communities has caught on like wildfire, thanks to ardent volunteers, Techo, its counterparts, and Techo para Aprender.

Inspiration is infectious. At the end of the interview, I was so moved that I offered my help as a professional English teacher. Fuenzalida told me with an earnest smile, “We always need more volunteers.”

If you want to help your community in some way, do whatever you can with whatever organization is at hand! If there is a Techo near you, get in contact them.

Annie Merkley is an English Teacher and Freelance Journalist living in Santiago, Chile.