by Tibor Krausz Correspondent from BANGKOK

JANUARY 10, 2020 - BANGKOK - Nirut “Nick” Chomngam drops to his knees before a large monocled cobra. The snake raises its head and spreads its hood in warning. 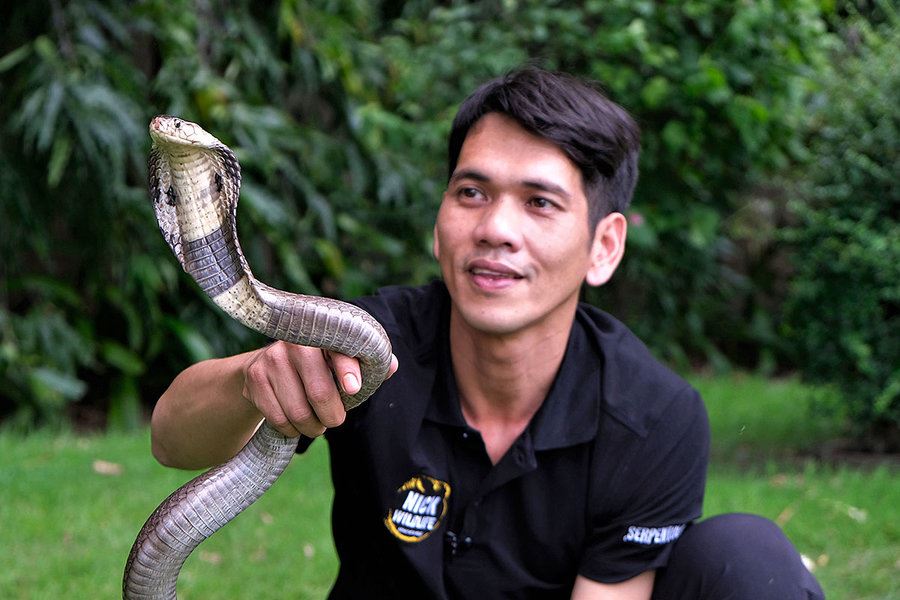 Wildlife expert Nirut Chomngam shows how to handle a monocle cobra on the outskirts of Bangkok, Sept. 13, 2019.Tibor Krauss

A quick, well-aimed bite could land the Thai wildlife expert in trouble, but Mr. Nirut isn’t bothered. He slowly reaches out and touches the snake on the top of its head. The cobra doesn’t flinch.

“Snakes may look expressionless, but you can read their moods,” Mr. Nirut later explains.

If the cobra fixed its gaze on him and started flicking its tongue rapidly, that would indicate it was getting agitated. If it began hissing and pulled its head back, it would be ready to strike.

This cobra isn’t doing any of that. Next, Mr. Nirut lifts it up by the tip of its tail. Holding it gently, he allows the serpent plenty of wiggle room, and it swivels around inquisitively in his hand. Mr. Nirut’s cameraman zooms in for a lingering close-up.

The footage, shot in a rural area outside Bangkok, will be showcased on Mr. Nirut’s YouTube channel where he has close to 900,000 subscribers. His nearly 300 Thai-language videos have garnered more than 140 million views, and counting, in a country of 69 million.

Mr. Nirut’s hands-on dealings with dangerous snakes may appear like the kinds of stunts Thai serpent handlers perform at “snake farms” for the benefit of gawking tourists. Yet he has a loftier aim than mere entertainment.

Dressed in his trademark black polo shirt, khaki cargo pants, and sturdy hiking boots, Mr. Nirut has been traveling around Thailand at his own expense to teach rangers, wildlife officials, and villagers about the country’s myriad snakes. Using slides, videos, and live animals, he explains how to tell species apart, how to avoid being bitten, and what to do if you get bitten.

“Most Thai people are terrified of snakes, but if they see me handle dangerous snakes safely, they can learn to understand these fascinating animals,” he says.

In each case, education is his mission. “Snakes are marvels of nature. They’re very important to the health of ecosystems, so we should protect them,” he says.

A change in people’s attitude should benefit snakes in Thailand, where more than 200 species are native to tropical wetlands, grasslands, forests, and seas. Of those, fewer than a third are venomous (about three times as many as in North America). Many Thais prefer not to risk it, though, and kill any snake on sight.

“Once I came across a snake and clubbed it to death,” attests Supachok Chumpet, who lives in Bangkok. “Later, I watched Nick’s videos and realized I shouldn’t have,” he adds. “I regret killing it.”

Many Thais have no choice but to coexist with snakes. In Bangkok alone, there are nearly 40,000 recorded home invasions by snakes each year. Thailand’s sprawling capital has been built on marshy ground that was home to countless slithering reptiles.

Although deprived of their natural habitat by encroaching development, the snakes have never left. They continue to inhabit patches of greenery, especially around the city’s many canals.

And many of them venture into gardens and houses for food and shelter. When that happens, panicked residents call fire departments for help. Pinyo Pukpinyo, a firefighter who specializes in catching snakes, answers up to 10 calls a day.

“Most people live next to snakes, whether they like it or not,” says Mr. Pinyo, who is stationed in a suburban area. “They don’t give any thought to snakes until one is in the house,” he adds. “Then they frantically try to find out on Google what kind of snake it is and call us to come and get it.”

Mr. Nirut regularly joins Mr. Pinyo in training sessions for Bangkok’s firefighters. “He’s spreading knowledge about snakes online,” the fireman observes. “Before Nick came along, snakes’ fate was to be killed instantly. Now, thanks to his videos, they have more of a fighting chance.”

Even those tasked with protecting snakes often can’t tell a deadly cobra from a nonvenomous rat snake. “Many wildlife rangers don’t know about snakes,” says Mr. Nirut, who worked part time as a ranger in a national park in central Thailand until six years ago, when he began making wildlife documentaries. “Their job is to protect wild animals, including snakes,” he notes. “Instead, they kill snakes out of fear.”

Owing to his informative and engaging videos, Mr. Nirut has become a YouTube star in his homeland. He’s seeking to emulate his idol, the late Australian animal expert Steve Irwin, with his endeavors.

His boyish good looks and affable mien have added to his popular appeal. “In Thailand no one has done what he’s doing,” says Aganid Yankomut, a biologist who has accompanied Mr. Nirut on some of his field trips. “He’s especially popular with women,” she chuckles.

He’s certainly popular with Preeyaporn Wongsatiam, who lives in a northern province where snakes are plentiful. “I like every single video he makes,” she says. “I’ve learned a lot from them. If a snake comes to my house, now I know what to do.”

That includes staying calm, identifying the snake, and calling an expert snake catcher if need be.

Mr. Nirut has never been bitten himself – except on purpose. He once coaxed a nonvenomous sunbeam snake into biting him on a finger. He did so for a video in which he sought to dispel a widely shared misconception that the snake, which is common in Thailand, is highly venomous.

“Not even venomous snakes like cobras and vipers will trouble you unless you trouble them first so they feel threatened,” he says. “I want people to stop harming snakes and learn to coexist with them.”

His mission hasn’t always been a walk in the park, so to speak. Last year he contracted a severe lung infection during a weeklong stay in a forest in southern Thailand. “It hasn’t been easy for me, traveling around the country and spending a lot of time in forests,” he concedes. “But I want to help people, and I want to help snakes.”

Mr. Nirut’s videos are helping change attitudes, says Montri Sumontha, a herpetologist who works for Thailand’s Department of Fisheries. “Thai people have many false beliefs about snakes, which adds to their fear of them,” he says. Some locals believe that king cobras can magically appear and disappear; others think certain herbs planted around houses will keep snakes away.

“In Nick’s videos,” says Mr. Montri, “people can see with their own eyes how false such beliefs are.”

Enjoy more stories of Community Heroes at MY HERO