by Gaurish Gaur from San Diego, California in United States 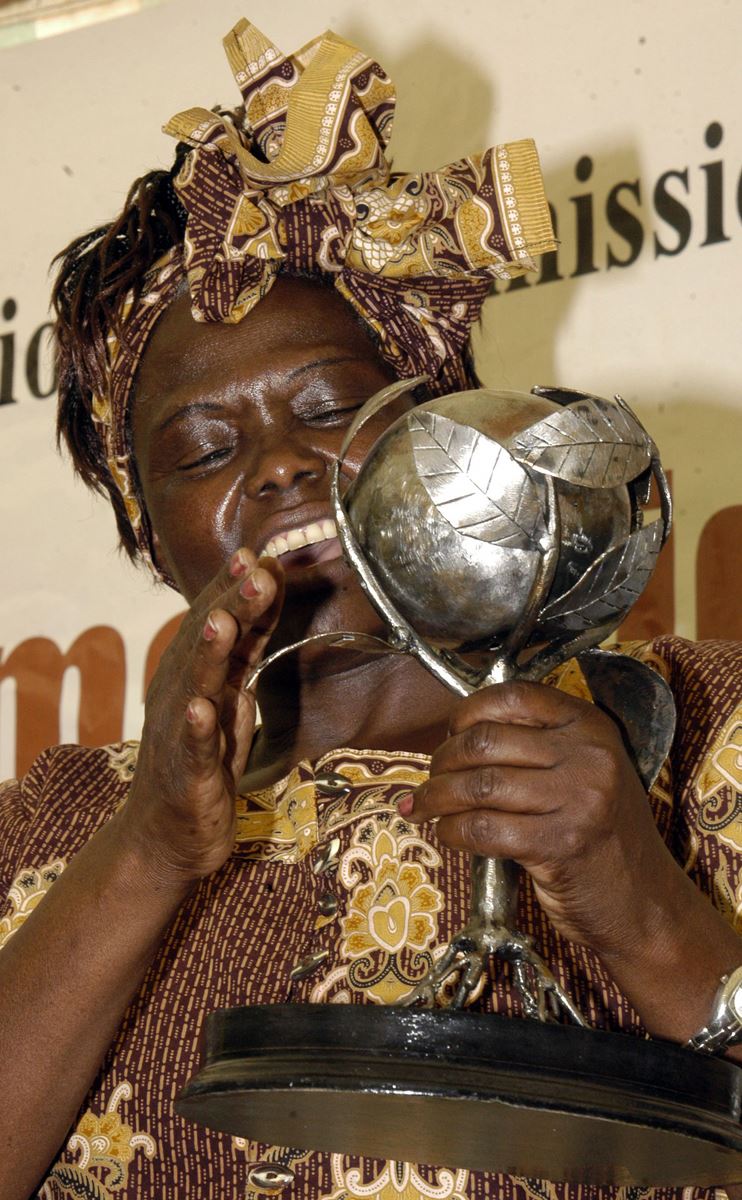 Wangari Maathai accepting human right awardhttps://upload.wikimedia.org/wikipedia/commons/d/d8/Wangari_Maathai.jpg“A hero is someone who rises above his or her fears and limitations to achieve something extraordinary . . . a hero embodies what we believe is best in ourselves” (Fleming). James Fleming, in his article “Review of Superman on the Couch: What Superheroes Really Tell Us About Ourselves and Our Society,” argues how heroes exemplify the morals of the society they represent. Indeed, Fleming suggests that, without heroes, “we're often forced to face the same worries, pressures, and dangers on a day to day basis, month after month, year after year, usually with little hint or hope for possible change.” In other words, change in society is dependent upon heroes who overcome limitations to inspire others. Although heroes in the media are conventionally portrayed as glamorous figures with superhuman intelligence and athleticism, a true hero is often an ordinary person who commits selfless acts in the face of danger. For example, soldiers would be classified as heroes. By risking their lives on the battlefield, soldiers uphold traits of loyalty, duty, and courage. In essence, it is a soldier’s determination and humility that categorizes them as the quintessential American hero. Consequently, a hero’s bravery also inspires others to commit selfless acts—creating a cycle of inspiration that can uplift an entire community and, thus, advance society. To me, a hero is someone who is determined enough to overcome obstacles, yet also humble enough to inspire others.

An example of such a hero is Wangari Maathai, who, through her determination and humility, planted trees to combat environmental and socio-economic issues. The oldest daughter of subsistence farmers, Maathai was born on April 1, 1940, in Nyeri, Kenya. In 1953, Maathai's parents defied traditional gender norms by prioritizing Maathai's education and placing her in a private secondary school. Through perseverance, Maathai later received the Kennedy Scholarship, which allowed her to pursue a college education in the United States at Mount St. Scholastica in Kansas, and later, the University of Pittsburgh. Eventually, in 1977, Maathai risked her stable career as a scientist to become an environmental activist. For instance, she formed the Green Belt Movement, an organization that promoted tree planting as a method to combat deforestation. Despite the Kenyan government’s opposition towards her social work, Maathai was able to mitigate soil erosion, firewood depletion, and food insecurity. Although Maathai was ridiculed by many of her former colleagues for her defiance against the Kenyan regime, she persisted, venturing into political activism. For example, in 1992, Maathai publicly defended the release of innocent political prisoners, ultimately receiving a Nobel Peace Prize for her collective advocacy. Although Wangari Maathai is best known for her activism, it is her persistence and humility that sets her apart from other activists. Simply, through defying oppression and fighting for the rights of everyday people, Wangari Maathai serves as a beacon of hope for the common person to become a hero. 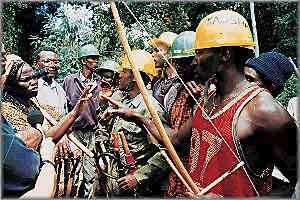 An armed militia encounters Maathaihttps://upload.wikimedia.org/wikipedia/commons/4/4c/Wangari_Maathai_in_Nairobi.jpgDespite facing adversity, Wangari Maathai was persistent in her rebellion against corrupt, powerful figures. For example, when the government was planning on privatizing Karrura Forest, Wangari Maathai continued planting trees. To make a point, she ignored all threats from the government to not plant trees: “We were confronted by two hundred guards armed with machetes, swords, bows, and arrows and these young men were unstable on drugs or alcohol… I asked myself,  Why would he hit me, all I did was plant the tree? . . . Nevertheless, I remained still” (Maathai 268-269). By explicitly stating “I remained still,” Maathai emphasized her ability to maintain an optimistic mindset in the face of fear. Historically, a common person under an authoritarian regime would have been intimidated by an intoxicated, violent, and unstable army. However, Maathai—despite being an average citizen who was viewed as powerless through the eyes of the government—used her limitations as aspirations. Even though she received an initial threat from the government, Maathai not only continued to defy the government’s request but also dared to persevere her campaign against an armed militia. Additionally, Wangari Maathai once again led a nonviolent protest as she advocated for the release of innocent political prisoners. Despite being threatened by tear gas and gunshots, and even being beaten unconscious, Maathai “kept up her protest for an entire year” (Teaching Tolerance Staff). Regardless, Maathai defied all expectations. Although authoritarian figures commonly use intimidation techniques and brute force to command obedience, Maathai’s resistance against these fear tactics highlights her iron-willed physical—and mental—strength. Physically, Maathai had the endurance to continue the protest for a year while deprived of basic necessities such as food, water, and clothing. Mentally, Maathai had the determination to persist under conditions of constant threats of danger. In any case, Maathai shows what it truly means to be persistent: having the strength to do what is right, no matter the consequences. Therefore, through her protests against authoritarian figures, Maathai inspires others to persevere through obstacles and induce a change in their communities.

Along with her persistence, Wangari Maathai acted with humility towards others, allowing her to inspire others to follow suit. Others before Maathai have long recognized the emerging problems of the rapid depletion of trees, water, and crops. However, Maathai was the first to get to the root of the problem. In a simple yet ingenious solution to deforestation, Maathai had rural women plant trees for money, which she later called the Green Belt Movement: “Although I was a highly educated woman, it didn’t seem odd to me to be working with my hands, often with my knees on the ground, alongside rural woman. Some politicians ridiculed me for doing so . . . But I had no problem. After all, I was a child of the same soil” (Maathai 137-138). While many acclaimed scientists preferred to work with other highly educated people, Maathai—by working alongside rural women—broke down the class divide. As Maathai championed for inclusivity, she was able to further expand her movement. In essence, her humble mindset was able to spread the message that it takes the heart of knowing we all share the same earth and beginnings, rather than a diploma, to plant a tree. Additionally, Maathai also exemplifies humility as, after receiving international recognition, she continued to work directly with her community on problems they encountered. According to her neighbors, Maathai was a “down to earth politician” who sheltered 200 displaced Green Belt members in her home (Ngige). Even though Maathai already lived in a cramped home, she instinctively put the needs of the disadvantaged over herself. While many celebrities today boast about their donations towards charity, Maathai truly sacrificed the little she already had for others. Once again, Maathai used her success as a platform to reach out to those in need. In sacrificing her personal gain for others’ well-being, Maathai inspires others to also remain humble and give back to the community that made them who they are. By championing inclusivity and promoting philanthropy, Maathai exemplifies humility and, in doing so, encourages people to remain hopeful. 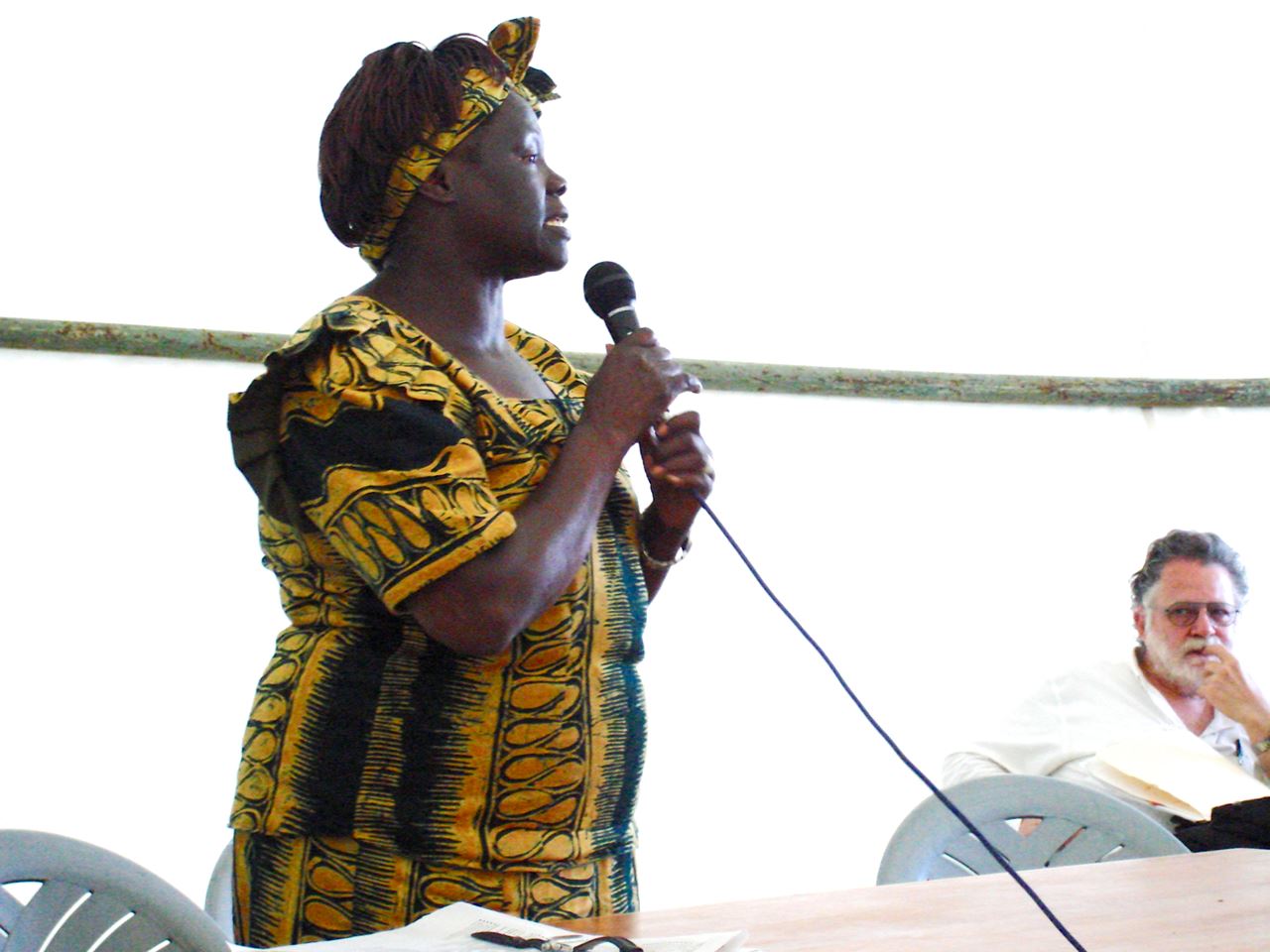 Wangari Maathai as a public speakerhttps://upload.wikimedia.org/wikipedia/en/d/db/Wangari_Maathai_social_forum.jpgThroughout her life, Wangari Maathai fought against tremendous odds to help the oppressed, allowing her to become an emblem of hope for any common person looking to spark change. Whether in the form of physical harm, mental threats, or discriminatory bias, Wangari Maathai had to persevere through many obstacles to become an activist. In the end, Maathai's persistence and humility allowed her to develop a revolutionary solution for deforestation. Even after Maathai's passing in 2011, her impact on the world is only ever growing. As Maathai once said, “A lot of people say, ‘They could kill you.’ And I say, ‘Yes, they could, but if you focus on the damage they could do, you cannot function. Don’t visualize the danger you can get in. Your mind must be blank as far as danger is concerned.’  . . . It’s not like I see danger coming, and I feel danger. At this particular moment, I am only seeing one thing—that I am moving in the right direction” (Gilson). Maathai's ability to ignore danger inspires us to do what we believe is right. Despite her international recognition, Maathai never failed to give back to those who needed it the most. Along with others, I, too, have been touched by Maathai's efforts. Maathai has directly inspired me to give back to the world. If Maathai, through her sheer determination and humility, can overcome immense obstacles—so can I. In recent years, India’s once lush countryside has become degraded with deforestation, drought, and poverty. Despite these concerns, politicians are too preoccupied to see the looming environmental disaster. Following Maathai's footsteps, I hope to start an organization similar to the Green Belt Movement that will connect grants with farmers in order to encourage them to plant trees. I hope to fundraise enough money. But in the end, I hope to follow in the steps of Wangari Maathai and become the same beacon of hope that inspires others to take action. Truly, in a time when heroes epitomize the ideals of our society, Wangari Maathai brings us one step closer to a selfless society and one step further from our need for materialistic possessions.

Fleming, James. Review of Superman on the Couch: What Superheroes Really Tell Us about Ourselves and Our Society. By.Dept of English, University of Florida. 12 Feb 2019.: ImageTexT: Interdisciplinary Comics Studies. 2.2 (2006).Vol.2, No2

Gilson, Dave. I Will Disappear Into the Forest’: An Interview With Wangari Maathai.. ..5 Jan. 2005. Online