'We want to keep Ukraine free.’ Why women rise in Ukraine army 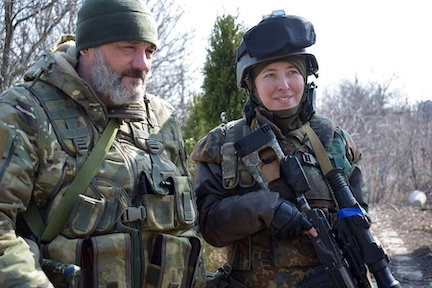 Olena Bilozerska and her husband in the village of Vodyane near Mariupol, Ukraine, in 2017. She is a sniper who helped lead successful lobbying for women to be allowed in combat. February 23, 2022Courtesy of Olena Bilozerska

Nadia Babych stands watch at a checkpoint near the town of Zolote in eastern Ukraine – a volatile region locked in conflict with Russia. The front-line trenches lie less than a quarter of a mile away.

The mother of two is clear on what is at stake should Russia unleash a fresh invasion against Ukraine, a scenario that has the entire world on edge.

“We are here to protect our country, our families,” she says.

Women – in uniform and not – have been central to efforts to counter Russian aggression since 2014, when Moscow decided to annex Crimea and threw its support behind separatists in the Donbass region. Women now make up almost 10% of the Ukrainian Armed Forces, serve alongside men in combat positions, and are ensured “equal rights” with their male counterparts under a 2018 law. Since 2019, they have been able to study in military colleges to achieve higher ranks.

Gone are the days when a woman would operate a rocket launcher but be listed as a doctor on her papers because Soviet-era rules prevented a woman from performing roles that could compromise her reproductive health.

Traditional gender norms in the former Soviet nation have been shaken up thanks to young women who have fought, often as volunteers, against Russia. So much so, that even LGBT war veterans came forward demanding recognition and support for those who still serve.

The ongoing conflict in eastern Ukraine has forced some 1.5 million people to flee their homes and hollowed out the economy in cities and villages that skirt the front lines. In Zolote, where Russian-backed separatists control a portion of the town of 13,000 residents, the military is one of the few reliable employers. Ms. Babych enlisted in 2017.

She describes her male comrades with the border guard service as “absolutely accepting” of her. “It’s a comfortable situation here,” she says. She wears her engagement and wedding bands on her right hand, the same she uses to fire a weapon. “The guys treat me normally, like they treat themselves. There’s no difference.”

“The same reasons as men”

Over the past five years, Ms. Babych has reached the rank of junior sergeant and welcomed a second daughter. She views her motivation for serving as no different than that of male soldiers. “Women have the same reasons as men for joining,” she says. “We want to keep Ukraine free.” 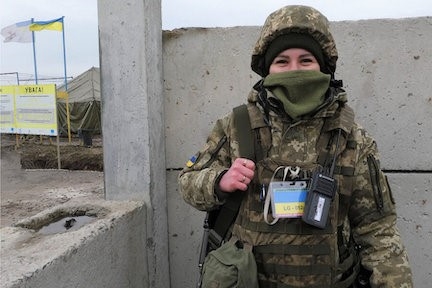 Martin KuzNadia Babych, a junior sergeant with the Ukrainian border guard service, stands at a military checkpoint in the eastern town of Zolote, Ukraine, Feb. 17, 2022. "I want to show that women have the same reasons as men for joining" the military, she says.Ukraine’s army granted women the right to fight in combat positions in 2016. Before that, they could work as nurses, secretaries, seamstresses, and cooks, although in reality they often undertook responsibilities reserved for men without getting the relevant benefits. The policy change came thanks to lobbying efforts by female veterans such as Olena Bilozerska, a sniper who served as a volunteer in many of the hotspots of eastern Ukraine between 2014 and 2016.

“In the very first two years of the war, fighters on the front line were very surprised when they saw a female fighter,” says Ms. Bilozerska, a protagonist in a documentary film, “Invisible Battalion,” that triggered a broader conversation about the role of women in the army and the needs of female veterans.

Ms. Bilozerska learned her sharpshooter skills in the woods of Kyiv. She was taught by her husband, an army veteran who foresaw conflict with Russia a decade in advance. The first time she showed up on the front, her male colleagues wondered if she was a doctor. Today her reputation precedes her and makes her a regular target of Russian trolls online.

“Everyone got used to female fighters on the front line,” says Ms. Bilozerska, who went on to train as a military officer and commanded a self-propelled artillery platoon in Donetsk for two years. “It’s normal.”

She credits the important participation of volunteers in the war effort against Russia for setting in motion a shift in culture within the Ukrainian army. Volunteer fighters, unlike soldiers serving under contract, served on the front lines by choice, and commanders were keen to keep those who showed high skill and motivation, regardless of their gender.

“In the volunteer battalions, every fighter is free,” she says. “Every commander knew, that if he has a female fighter who wants to fight on the front line and he doesn’t allow it, he will lose a very motivated fighter, and she will go to another unit. If a girl or a woman wants to fight, she will fight.”

Daria, nicknamed “Dasha,” is one of six women among 30 men stationed at a military training center in Desna, in northern Ukraine. She is pushing her superiors for a front-line rotation but getting nowhere. “We still have problems with this,” she says on a video call. “Sometimes we meet protest from our commanders.”

Stereotypes persist even though women exert great efforts to break them. 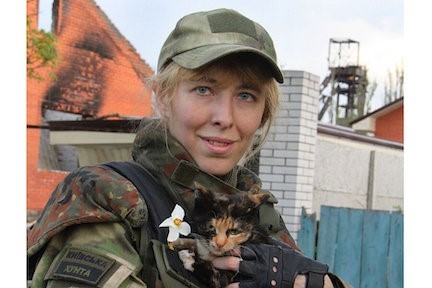 Courtesy of Olena BilozerskaOlena Bilozerska holds a cat in the village of Pisky near the Donetsk airport, in eastern Ukraine, 2015. “Everyone got used to female fighters on the frontline,” says Ms. Bilozerska, who trained as a military officer and commanded a self-propelled artillery platoon in Donetsk for two years.

“The most common stereotype is that women are weak and require special treatment,” adds Daria, who asked her last name not be used to protect her privacy. “When you are a woman, you cannot be weak. There is a stereotype that if a man gives up, he gives up because it is really hard, and really difficult for him. If a woman gives up it is because she is a woman.”

Changing such attitudes in the army – as in society – takes time.

“The army is still not an acceptable environment for women because of sexist attitudes, sexual harassment, and rape,” says human rights activist Olena Shevchenko. “[For] LGBTI [people] it is still not possible to come out during their service time. Mainly they do it afterwards, after they quit. And they need to be prepared that all those people who were your family during service time refuse you.”

Viktor Pylypenko, who fought in the Donbass battalion, came out in a 2018 photo exhibit. He hails from a military family and heads a veteran organization for members of the LGBT community boasting about 2,000 members on Facebook. “Military people in Soviet times were not used to gay people so it was a shock to my father when I came out,” says Mr. Pylypenko who demobilized in 2016. “In the communist era, being a homosexual was a criminal breach. They could put you in jail for that.”

The Ukrainian Armed Forces does not ban gays or lesbians from serving, he notes, but trans individuals are shut out on psychological grounds.

“Overall, society’s attitude toward us has become softer,” says Victoria Didukh, a trans veteran woman who came out after serving. “But of course there are people who call us sick. It feels very painful and sad. When I signed a contract with the army, I had the idea that I have to protect my land – not just square meters, also the population. Now some of these very people would be ready to kill me just because I am like this.”

Andrei Vitaliovych and his wife, Paulina, the parents of a young daughter, have both logged time in the trenches with separate units during the eight-year war. The rising numbers of Ukrainian women in uniform has meant more married couples serving on the front lines. “It’s no problem to have women in the army,” says Mr. Vitaliovych, a junior sergeant with the 24th Mechanized Brigade deployed to Zolote. “We need them.”

That need has come into sharp focus in recent days, with separatist forces shelling dozens of Ukrainian military positions and civilian targets along the front – a possible portent of wider Russian aggression against Ukraine.

“If we were in a peaceful situation, I would say maybe women don’t need to be in the military because there are enough men who could take care of everything,” Sergeant Vitaliovych says, incoming rocket fire punctuating his words. “But we have a war, so it is important for all Ukrainians – men, women, everyone – to make sure our country is defended.”