When wildfires ravaged Australia, she found purpose in saving wallabies

After heavy rains doused Australia’s massive wildfires earlier this month, they revealed widespread devastation. But for Chris Pryor, they also revealed a sense of purpose and a hardened resolve to value our environment.

FEBRUARY 26, 2020 - KANGAROO VALLEY, AUSTRALIA - A bushfire turned the house where Chris Pryor had lived for a decade into a rectangle of ashen debris. She escaped with her two cats and little else as the inferno approached in early January, and when she returned a few days later, she braced herself for the sight of her ruined home. Only after arriving did she notice another dimension to the destruction. 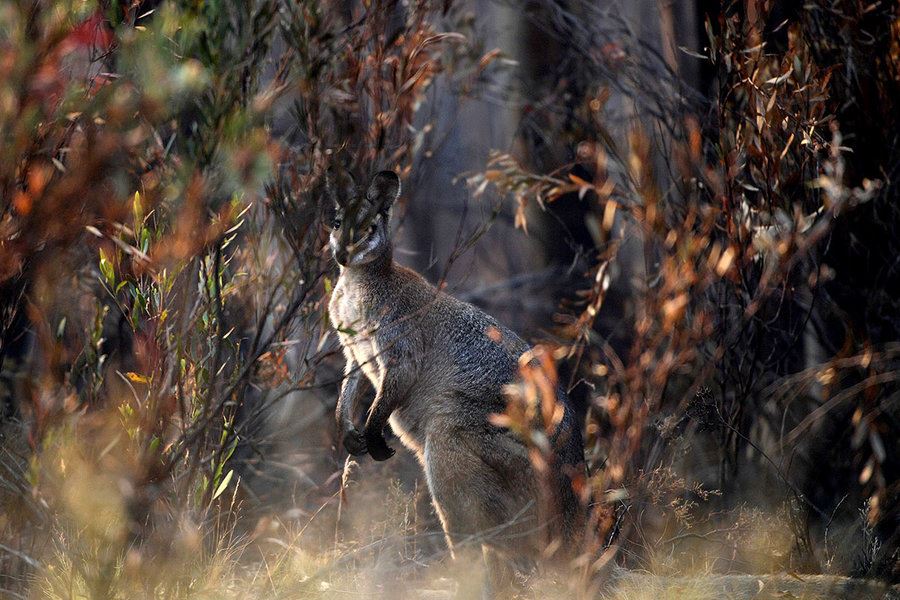 The calls of magpies and lyrebirds, the chirping of cicadas and crickets, the wind rustling leaves in eucalyptus trees – the familiar sounds of the wild had fallen mute. The charred forest around her 25-acre property was enveloped in an unsettling quiet.

“You expect to see the devastation. But I didn’t anticipate the silence,” says Ms. Pryor, who moved to Kangaroo Valley more than 20 years ago. The tourist town of 900 residents lies between Canberra and Sydney in southeastern Australia in a region ravaged by this summer’s bushfires. “That’s when the immensity of what’s happened really hit me.”

In that moment, she recalls, her concern focused less on her own losses and more on the plight of the country’s wildlife, and in particular that of the brush-tailed rock-wallaby. Listed as vulnerable by the World Conservation Union, the species exists only in Australia aside from small colonies in New Zealand and Hawaii, and bushfires scorched much of its habitat, further threatening its future.

Ms. Pryor leads a nonprofit group called Friends of the Brush-Tailed Rock-Wallaby that works to sustain and revive the fragmented population of the marsupial, whose numbers have dropped below 20,000 adults. Three colonies live in the Kangaroo Valley, where the government has air-dropped hundreds of pounds of carrots and sweet potatoes to help the animals survive in the barren landscape.

For Ms. Pryor, devoting attention to wildlife deprived of habitat lends a parallel purpose to her days, as she and the wallabies attempt to recover from sudden homelessness. 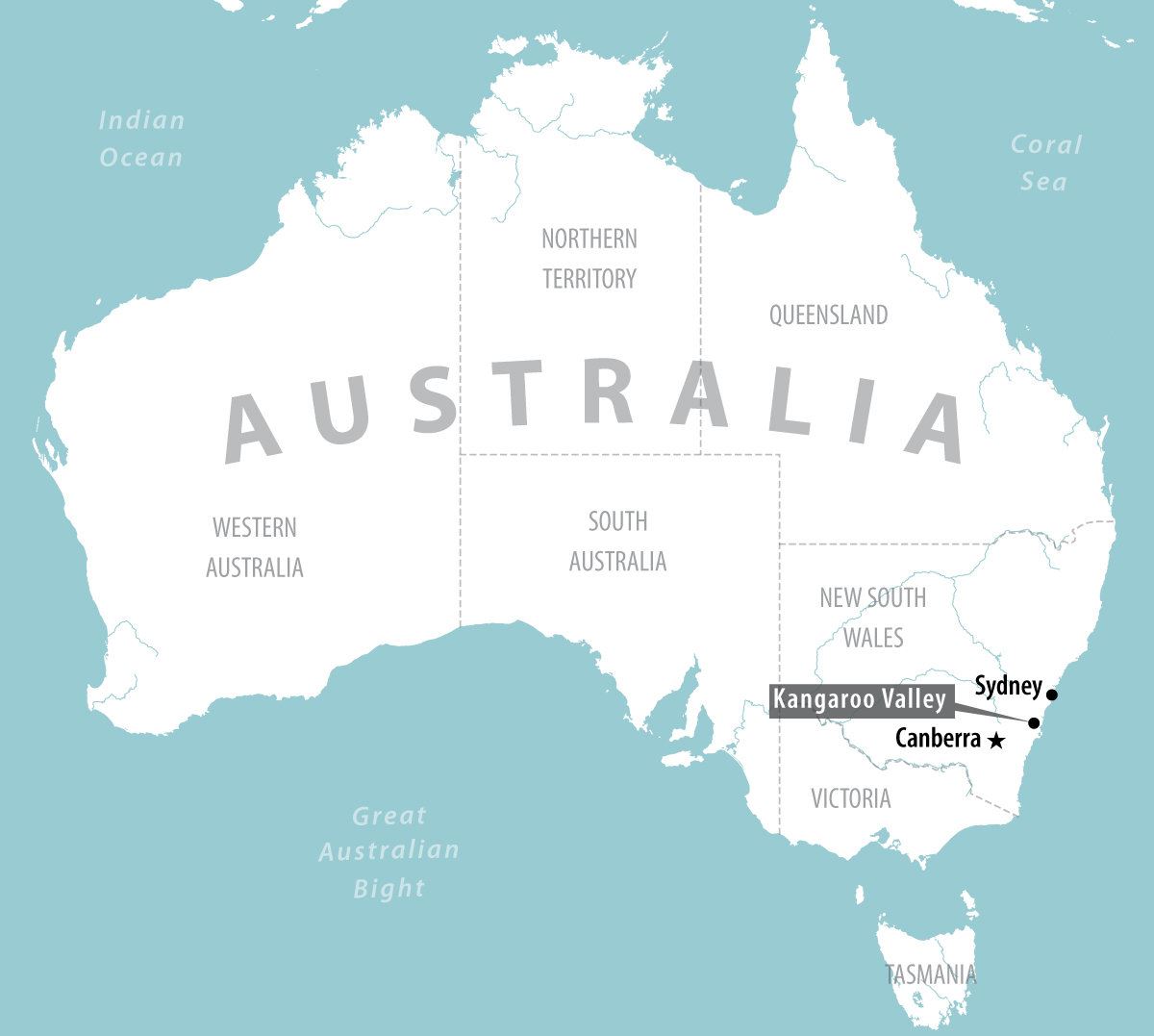 “These fires are the most enormous wake-up call for everybody,” she says. “They’ve increased my desire to help because if I’m not part of the solution, I’m part of the problem.”

A lifelong love of nature

Heavy rains earlier this month doused the massive fires that had burned more than 27 million acres and killed an estimated 1 billion animals across Australia since September. Researchers have identified 113 species in need of urgent conservation action, and the brush-tailed rock-wallaby counts among the 19 mammals listed.

Muscular and compact, with brown, black, and gray fur, the marsupial resembles a smaller version of its cousin the kangaroo. Most of its colonies live scattered across the Great Dividing Range, a string of mountains that runs the length of Australia’s eastern coastline. The species faces perpetual threats from fires and development that reduce its habitat, and from foxes that prey on young wallabies.

Ms. Pryor’s simple rationale for seeking to save the animals – “because they’re here” – reflects an embrace of nature that dates to childhood in her native England. She recounts plucking earthworms from the family garden as a toddler and presenting them with beaming pride to her parents. Her fascination with ecology has remained in bloom ever since.

In 1978, lured by Australia’s natural beauty, she immigrated to Sydney. Two decades later, weary of urban living and her career as an IT project manager, she semiretired and moved to Kangaroo Valley with her husband at the time. She arrived a few years after John and Susan Rowntree formed Friends of the Brush-Tailed Rock-Wallaby to preserve the species. 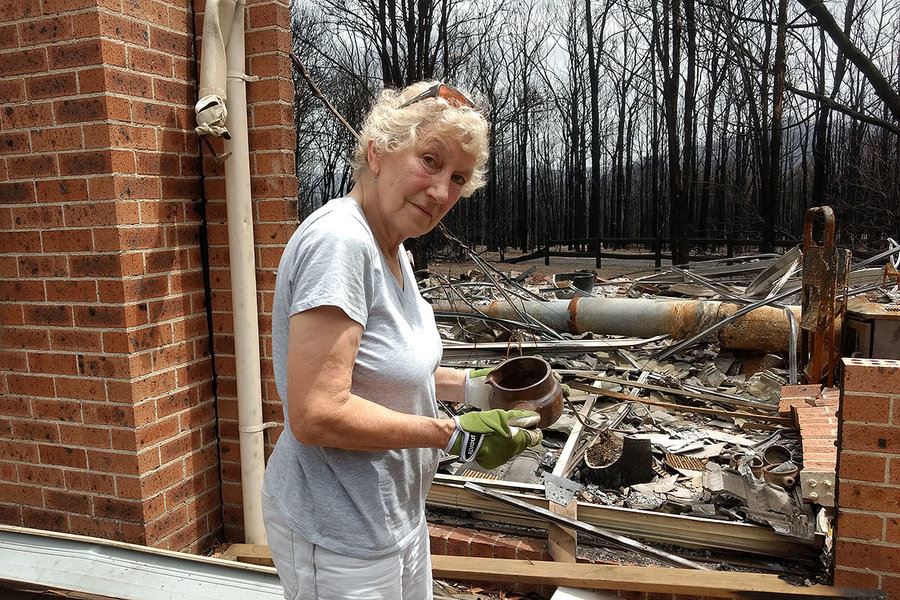 Chris Pryor found a clay pot in the ruins of her home in Kangaroo Valley, Australia, on Jan. 25, 2020. Her house was destroyed in a bushfire earlier in the month. "You can replace things," she says. "You can't replace your life."Martin Kuz/The Christian Science Monitor

Ms. Pryor, who holds Australian citizenship, began volunteering with the organization to assist with fundraising and outreach. Five years ago, she stepped into the president’s role, and Mr. Rowntree credits her with raising the group’s visibility and fortifying its ties with national parks officials and private landowners to aid the wallaby’s cause.

“She is very committed and has inspired a new generation of members to join,” he says. “She has a passion for protecting the environment.”

The nonprofit has collaborated with park rangers to release captive-bred wallabies into the Kangaroo Valley and to thin the fox population through limited trapping and hunting. A decade after researchers feared the marsupial would disappear from the area, the programs have boosted its numbers from fewer than 30 adults to an estimated 40 to 60, and most appear to have survived a bushfire season that scientists describe as the worst on record.

The Australian Wildlife Society honored the 150-member volunteer group with its community wildlife conservation award in 2016. Patrick Medway, the society’s chief executive officer, lauds Ms. Pryor and the organization for averting the demise of the region’s three colonies as their habitat shrinks.

“As a wildlife conservation society, we’re indebted to people like Chris and her friends,” he says. “Their outstanding work will save the brush-tailed rock-wallaby in the Kangaroo Valley for the next generation of young Australians.”

“The antidote to despair”

Ms. Pryor steered her SUV down a dirt road on a blue-sky morning three weeks after the blaze that destroyed her home. The back of the vehicle held a clutter of clothing, towels, and other donated items she has received since the flames incinerated almost everything she owned. She has stayed with friends as she navigates a maze of insurance claims and mulls whether to rebuild.

She pulled into her driveway and stepped out. The visit was her third since the fire, and her bright sense of humor provided a contrast to the blackened tableau. She pointed to the house’s utility meter on a singed section of brick wall that remained standing. “I’m probably still getting charged!” she joked.

The country’s bushfires killed at least 33 people and torched some 3,000 homes, including a half-dozen houses in Kangaroo Valley. In light of the death toll, Ms. Pryor views her losses with buoyant pragmatism.

“It’s just stuff,” she says. She stood in the ashes of her kitchen and reached down to exhume a trio of glass bowls that had melted together. “You can replace things. You can’t replace your life.”

Ms. Pryor works part time as a cashier at The Nostalgia Factory, a gift shop on Kangaroo Valley’s main street. Chatting with customers nourishes her spirit as she ponders her future and her adopted homeland’s in the aftermath of the bushfires.

“The antidote to despair is to stay active,” she says, echoing the words of songwriter and activist Joan Baez. “If you feel hopeless, don’t retreat. Do something.”

The British expatriate wants Australia to respond with that kind of resolve to preserve its natural bounty and reverse the spiral toward extinction of the brush-tailed rock-wallaby and other species.

Ms. Pryor holds hope that the federal government’s initial pledge of $50 million (Australian; U.S.$33 million) for wildlife and habitat recovery marks only a first step. Countering the effects of climate change, she asserts, will require sustained cooperation across city, state, and political lines.

She invoked a quote attributed to Helen Keller, “Alone we can do so little; together we can do so much.” She peered toward the scalded hillside above her gutted home, where grass had begun to grow again. “We have to stop taking nature for granted,” she says. “All of us.”