Why a region that voted against Zelenskyy now embraces him 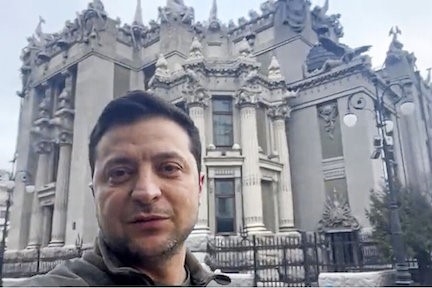 Ukrainian President Volodymyr Zelenskyy speaks to the nation via his phone in the center of Kyiv, Ukraine, Feb. 26, 2022. Residents in Lviv, formerly among the president’s biggest skeptics, say Mr. Zelenskyy has “become our face and voice.”Ukrainian Presidential Press Office/AP

Little debate existed until two weeks ago about where President Volodymyr Zelenskyy could least expect a warm welcome in Ukraine. In Lviv, an elegant, cosmopolitan city of cobblestone streets, cafe culture, and manicured parks on the country’s western flank, residents viewed him more as chief jester than commander in chief.

In 2019, Mr. Zelenskyy, a former actor who played the role of president in a popular comedy series on Ukrainian TV, ran for the real-life position and crushed the incumbent, Petro Poroshenko. He carried every region of the country except Lviv, an area of 2.5 million people that shares the name of its largest city, where he captured only one-third of the vote.

Residents here doubted that the political upstart could deliver on his promises of economic reform, fend off Russian President Vladimir Putin’s ceaseless pressure, and guide the country closer to Western Europe. Since then, nothing about Mr. Zelenskyy’s uneven performance in office had changed attitudes in “the soul of Ukraine,” as Lviv is known – until Feb. 24, when Russian tanks rolled over the border.

Any vestige of skepticism about the president has vanished as Russia escalates its attacks and civilian casualties mount in cities throughout the eastern two-thirds of the country. His blend of defiance toward Moscow and compassion for Ukrainians has won over his toughest audience at home and transformed him into a national treasure and international icon.

“He has made Ukraine proud,” says Yuriy Polovyy, a retiree and violinist in a string ensemble who voted for Mr. Poroshenko in 2019. He carries a plastic bag loaded with warm cabbage rolls and containers of borscht from a cafe as he walks home across the city’s central square. A patch with the country’s coat of arms adorns his black wool cap. “He is our president – the president for all Ukrainians.” 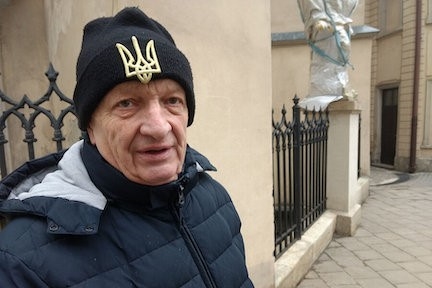 Political analysts suggest that Mr. Zelenskyy’s sudden strength as a wartime leader derives, in part, from the same inexperience once regarded as his primary weakness. His visits to front-line soldiers, heartfelt video messages exhorting civilians, and passionate pleas to Western officials for more support reveal an intuitive, visceral understanding of the moment that transcends politics and policy.

“He is not behaving as a typical politician,” says Sergii Glebov, an associate professor of international relations at Odessa I.I. Mechnikov National University in southern Ukraine. “He is behaving more as a human – as a Ukrainian fighting for his country, for his 44 million people, for his family, for himself. I’m not sure Poroshenko or any typical politician could do or would do what he has done.”

The heavy shelling and destruction unleashed on Ukraine by tens of thousands of Russian troops has yet to reach Lviv, some 50 miles from the Polish border. Still, the war has intruded in visible ways on this city of 720,000 people, the region’s largest urban center and the country’s most Western-leaning.

Hundreds of thousands of refugees have passed through Lviv by car, bus, or train on their way to Poland. Sandbags fill storefronts and soldiers walk the streets. Police occupy newly erected checkpoints fortified with anti-tank barricades and concertina wire on Lviv’s outskirts. Volunteers staff pop-up donation centers that gather food and supplies to send to military units and towns in the area.

A bomb shelter in Ivan Franko Park in the western Ukrainian city of Lviv is shown March 6, 2022. City officials have reopened the brick-walled space, which closed after World War II, in reaction to the ongoing Russian invasion of Ukraine. 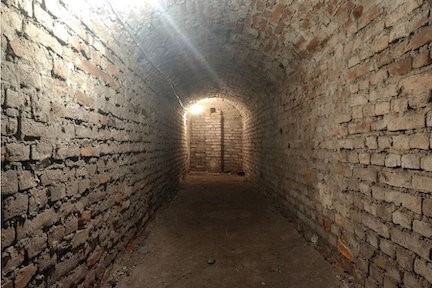 Martin KuzA bomb shelter in Ivan Franko Park in the western Ukrainian city of Lviv is shown March 6, 2022. City officials have reopened the brick-walled space, which closed after World War II, in reaction to the ongoing Russian invasion of Ukraine.

Beneath Ivan Franko Park, named after the Ukrainian poet and political activist born in the region in 1856, city officials have reopened a brick-walled bomb shelter that closed after World War II. Outside the town hall, a UNESCO World Heritage site built in Viennese classical style, the statues of four figures from mythology – Adonis, Amphitrite, Diana, and Neptune – have been swaddled in protective plastic.

Residents here credit Mr. Zelenskyy’s decision to stay in Ukraine for lowering the ambient anxiety and inspiring people to join the war effort, whether signing up for the civilian defense force or baking bread for front-line soldiers. Nazar Maidan and Zhanna Shurta, co-workers at a software firm, describe the president’s video addresses as can’t-miss viewing that provides daily doses of hope.

“He has unified us in a way that didn’t seem possible before,” says Mr. Maidan, who cast his ballot for Mr. Poroshenko three years ago. He explains that he found fault with Mr. Zelenskyy as a candidate for his celebrity status, lack of detailed policies, and the fact he grew up speaking Russian, instead of Ukrainian.

“None of that matters now,” Mr. Maidan says, standing near the wrapped figure of Amphitrite, the Greek goddess of the sea. “He has been strong for Ukraine and has gotten the whole world behind us.”

In his video messages, Mr. Zelenskyy, most often clad in a military-green T-shirt and jacket, appears weary yet spirited as he praises Ukrainian heroism, condemns Russian aggression, and beseeches the West for military intervention. The former star of “Servant of the People” melds a performer’s poise with coiled emotion and an urgent sincerity that resonates within and beyond Ukraine.

“He has become our face and voice,” says Ms. Shurta, another former Poroshenko supporter who has become a Zelenskyy booster since the war began. “People wondered before if they could really believe in him. These questions – nobody asks them anymore.”

Nazar Maidan (left) and Zhanna Shurta, co-workers at a software firm in Lviv, Ukraine, stand outside the city's town hall, March 4, 2022. They describe President Volodymyr Zelenskyy's daily video messages to the nation as daily doses of hope. "He has become our face and voice," Ms. Shurta says. 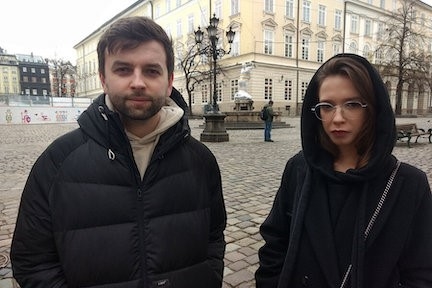 Martin KuzNazar Maidan (left) and Zhanna Shurta, co-workers at a software firm in Lviv, Ukraine, stand outside the city's town hall, March 4, 2022. They describe President Volodymyr Zelenskyy's daily video messages to the nation as daily doses of hope. "He has become our face and voice," Ms. Shurta says.

Mr. Zelenskyy has implored NATO leaders to declare a no-fly zone over Ukraine and deliver more military equipment and weapons. He has emphasized the moral starkness of their choice by detailing attacks on civilians and telling them they might never see him alive again as Russia escalates its offensive.

His reported answer to U.S. officials who offered to evacuate him from the capital of Kyiv soon after Mr. Putin sent his forces into Ukraine – “I need ammunition, not a ride” – turned into an instant internet meme. A selfie video posted Monday showed him walking through his office in Kyiv and taunting Moscow. “I’m not hiding,” he said, “and I’m not afraid of anyone.”

But before Mr. Zelenskyy shed his reputation as a faltering first-term president, he stumbled in the run-up to the invasion, some political observers contend. For three months he brushed off Western leaders’ warnings of an imminent attack as fear-mongering, even as Russia positioned 190,000 troops at Ukraine’s border.

His attempts to avert public panic, while perhaps well-intentioned, look naive in retrospect, says Olexiy Haran, a professor of comparative politics at the National University of Kyiv-Mohyla Academy. “There were a lot of novice mistakes,” he adds.

At the same time, Mr. Haran admits to no surprise at Mr. Zelenskyy’s ability to adjust to the gravity of Ukraine’s plight, finding the balance between outrage and anguish as he seeks to rally international support.

“His willingness to show his emotions – that’s why the West is so charmed by him. Ukrainians are a little more rational about how they see him,” Mr. Haran says. “But one thing that’s true for everybody is that they can see his authenticity. He’s not an actor playing a role.”

Mr. Zelenskyy’s evolution from TV comedian to moral conscience of a nation has raised fears that Ukraine might unravel in the event of his death. Mr. Glebov downplays such qualms and retains enough optimism to predict that Ukraine will prevail against Russia. In that case, he envisions Mr. Zelenskyy following through on his campaign pledges to enact economic reforms and eradicate the influence of oligarchs from political life.

On the other hand, he adds, “If Zelenskyy were to be killed, I believe Ukrainians would fight even harder to defeat Russia. Because then they would not only be fighting for Ukraine and for their freedom but also for their fallen president.”

For Yuri Yurchenko and Anastasiia Studenyak, colleagues at an IT firm in Lviv and onetime Poroshenko backers, the prospect of Mr. Zelenskyy’s demise represents the darkest scenario for Ukraine. “It would be catastrophic for us,” Mr. Yurchenko says. “He has become our rock star.”

Ms. Studenyak, who plans to transfer to a company office in the Netherlands in the coming weeks, considers Mr. Zelenskyy the one person who can prevent Russia from once again laying claim to her country. “If we lose him,” she says, “I feel we will lose Ukraine.