Why Holland aims to leave $80 billion in the ground

Around the world, climate conscious nations are scrambling to figure out how to wean off fossil fuels. But in one energy-rich country, that push has little to do with climate change. 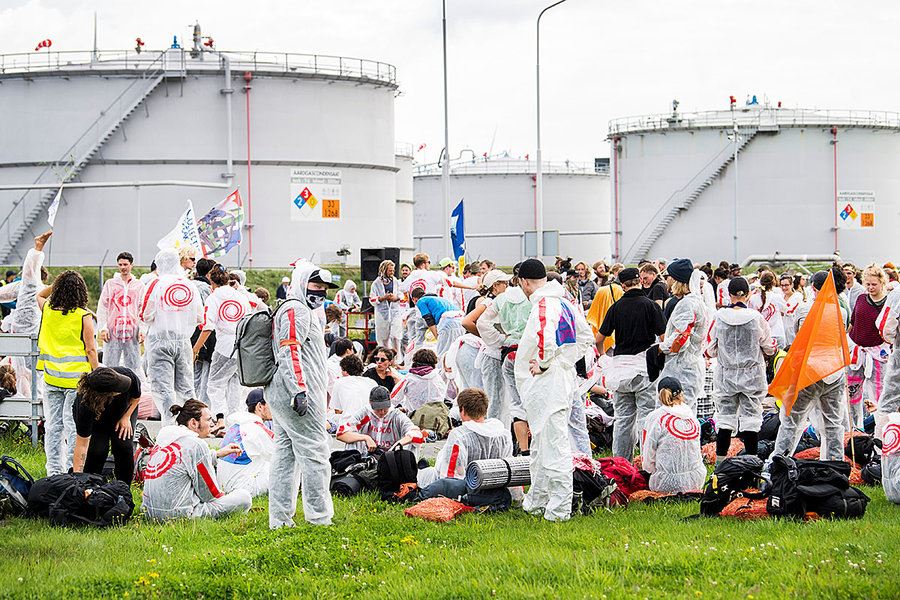 Protesters demand an immediate end to gas extraction at the Groningen field as they block a facility of Dutch gas production company NAM, in Farmsum, Netherlands, August 28, 2018.Piroschka van de Wouw/ReutersIt was 1991 and he was in the restaurant at his family’s hotel, a handsome brick building in the center of this quiet provincial town. He heard the front doors start to rattle, normally a sign that a big truck was passing, but the road outside was empty. “It was a Sunday. I remember it well,” he says.

It wasn’t a truck, it was an earthquake, caused by the extraction of natural gas from the surrounding flatlands of Groningen, the northernmost province in the Netherlands. It was one of hundreds of tremors that have for decades disturbed the lives of around 85,000 residents living on top of Europe’s largest onshore gas field, damaging their homes and depressing their businesses.

For more than half a century Groningen gas has heated Dutch homes, powered Dutch factories, and helped pay for one of Europe’s most generous welfare states. But now, under public pressure, the government is turning the tap off. The Groningen field is due to close in 2022, barring a winter crisis. Last year the Netherlands became a net importer of gas for the first time since the 1960s.

The decision to close the field was spurred by seismic risks to public safety, not climate change. But the move adds urgency to the search for more renewable energy resources, especially since the government aims to cut greenhouse gas emissions by 49% by 2030.

The closure is not without cost. The company operating the field, a joint venture between Royal Dutch Shell and ExxonMobil known as NAM, employs 1,400 people and indirectly supports as many as 20,000 jobs, according to Groningen’s top executive, King’s Commissioner René Paas. 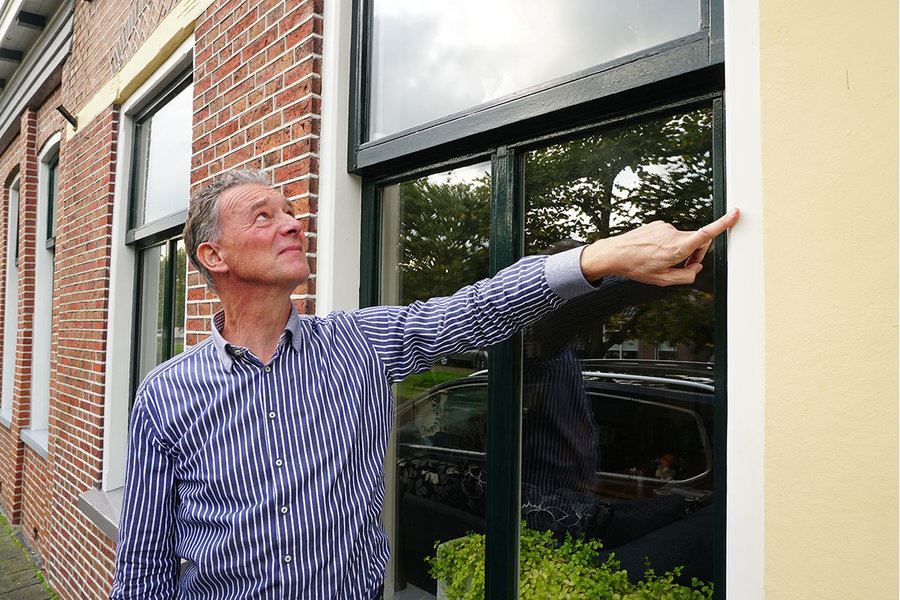 Ger Warink, a homeowner, points to cracks on his house in Loppersum, the Netherlands, that he blames on earthquakes linked to natural-gas exploration in Europe's largest onshore gas field in Groningen in the Netherlands.Simon Montlake/The Christian Science MonitorHe is hopeful, though, that the gas industry can pivot toward renewable energy and convert its existing infrastructure to produce and distribute hydrogen. “This is a province that is really motivated to make the change from fossil fuels to a new kind of energy,” he says.

A crisis can also be an opportunity. For the Netherlands, that opportunity lies in building a new energy grid that by midcentury could replace a network powered by gas from Groningen.

Since July 1, new buildings may no longer be heated by gas. Scores of houses in Loppersum are now being built to code with electric heat pumps. Energy efficiency grants are also available to retrofit older homes and to install solar panels.

“If the Netherlands isn’t capable of making this transition, no one else can. We have the (energy industry) expertise. We have the wealth,” says Joris Peijster, a former Shell engineer who quit last year to work on geothermal projects at a French energy company, hoping to be part of the solution to the global climate crisis.

And the policy shift is pricey. The decision to mothball the Groningen gas field is the most expensive decision a Dutch government will ever make short of war, Mr. Paas points out, since they are leaving as much as $80 billion worth of gas underground.

Leaving fossil fuels untouched is consistent, however, with the goals of climate activists who argue that oil-and-gas companies will need to do the same in order to avert global disaster.

A 2015 study in Nature estimated that 50% of known natural gas reserves, and 80% of coal, would need to remain in the ground if the world is to limit global temperature rise to 2ºC.

Local residents, however, are less impressed by the Dutch government’s climate policy and its promise to shutter the Groningen field within three years than they are concerned with the pace and scope of its compensation program. Will their homes still be repaired and reinforced? Why are buildings previously rated as at-risk now off the danger list? And if gas revenues dry up, where will fresh money be found?

Years of uncertainty and delays have sapped public trust in political promises, says Jacolien Masselink, a municipal official in charge of earthquake-related programs in Loppersum, the epicenter of the quakes. “Even the most reasonable people are angry.”

Loppersum is less than three hours by train from Amsterdam and other big cities, but by Dutch standards this region is the boondocks, far from the country’s political and economic heartland.

A sense of being peripheral added to the stress that residents felt when the tremors began to worsen, says Ms. Masselink. “They’re not used to standing up for themselves,” she says.

In the Netherlands, landowners don’t retain mineral rights. So when gas was discovered here in 1959 by Nederlandse Aardolie Maatschappij (NAM), the Shell-Exxon joint venture, the Dutch state became a co-owner of the field. Since it came online in 1963, Groningen’s gas has pumped about $465 billion into government coffers.

Today, the gas field’s pumps, gauges, and pipes are largely hidden from view. The landscape is a rural idyll of farms and canals dotted with the occasional windmill. But in the 1980s came the first hints of trouble.

Local residents complained of ground subsidence, which was linked to the pumping of gas. Then came the tremors, the result of gas extraction from porous rock that contracts and increases the stress on natural faults in the low-lying region’s soft soils. Most of the quakes were shallow and small, below a magnitude of 2, but even when they began to strike more often and more strongly, NAM paid little heed.

Mr. Warink, a rock musician, bought his canal-side house in Loppersum in 1994. One half of its double front is a showroom for the guitars and amplifiers he sells when he’s not touring. The other serves as his living room. The sliding door that should separate it from his dining room hangs at an odd angle, one of several signs of damage that he has documented in multiple claims against NAM.

Near his dining table he keeps a bulging folder of engineers’ reports, bank statements, and other NAM-related documents, packed in a silver flight case plastered with stickers from past tours. Ministers on fact-finding visits to Groningen have sat at his table and heard him out. But his folder of claims keeps growing.

“Politicians have lost the trust of the people here,” he complains. “Now they won’t believe anything they say.”

He has also been sitting at his table when the ground moved, like an underground train passing. “Then I looked out there,” he says, gesturing at the backyard. “The trees were shaking.”

The seismic risks of underground mining and oil and gas drilling are widely known, though proving cause and effect can be difficult. In the United States, an increase in the number of earthquakes in Texas and Oklahoma has been attributed to fracking and the injection of wastewater.

In 1993, NAM publicly accepted that gas extraction in Groningen could cause minor quakes and the company agreed to pay for repairs. “There was an acknowledgment that it could damage buildings, but was not a safety risk to the community” says Hein Dek, a spokesman for NAM.

Critics say the company knew the scale of the risks but did not take them seriously enough, abetted by governments that depended on the gas revenues. An especially violent quake measuring 3.4 struck in 2012 as the government ramped up production – to offset a financial recession and a cold winter – beyond a level that experts have since concluded is reasonably safe.

Mr. Peijster, the ex-Shell engineer, recalls how the company was mired in controversy over how to assess and compensate for damages when he joined NAM in 2013, but that it had little sense of how to handle disgruntled residents. Most of its staff were engineers and geologists, and few lived in the blighted towns and villages.

“Nobody took into account how people felt. They missed that part of the story,” he says.

The company was widely criticized for the bureaucratic torpor of its claims adjudication process. Last year the government took over responsibility for the program, seeking to speed up payouts.

NAM has so far spent €2.7 billion (nearly $3 billion) on quake-related repairs, research, and reinforcement and has set aside €1.7 billion for future payouts that will continue after extraction ends at Groningen, says Mr. Dek. “We are in full support of the decision” to stop production, he says.

No end in sight

Beneath the town hall where Ms. Masselink works are 101 pilings installed this year during a quake-proof retrofit that will end up costing taxpayers as much as the building cost to construct in the first place in 2007. Across the municipality 4,900 other buildings may also be at risk, but there’s no way of knowing without inspecting each one. So far, 341 have been reinforced or replaced.

It’s hard to set priorities when there’s uncertainty over risk assessment and future funding, says Jurry Bonnema, the municipal director. He frets that compensation money could dry up if NAM shuts down its wells in 2022. “I think this is not the most wise decision,” he says.

Taking the Groningen gas field offline will not remove the risk of tremors, though it might render them less frequent. The field is already operating at a reduced rate and still the ground buckles: In May, a 3.4-magnitude quake led to thousands of new damage claims.

In a region where the population was already falling, real-estate prices have taken a hit. In Loppersum, Mr. Bonnema says they fell as much as 15% following the 2012 quake. Lower house values mean lower tax revenues, squeezing municipalities already strained by the slow-moving crisis.

Back at his house, Mr. Warink lays out his options: Stay and reinforce, or sell and go.

The property is worth no more than €400,000 ($440,000.) It would be cheaper for NAM to buy him out; ensuring that his floors and walls don’t crack after tremors would probably cost a million euros. But he’s not selling. “My wife doesn’t want to leave this house,” he says.

And he understands her. “You have to make people feel safe,” he insists, “and you have to pay the costs.”