With the blink of an eye, anyone can play music 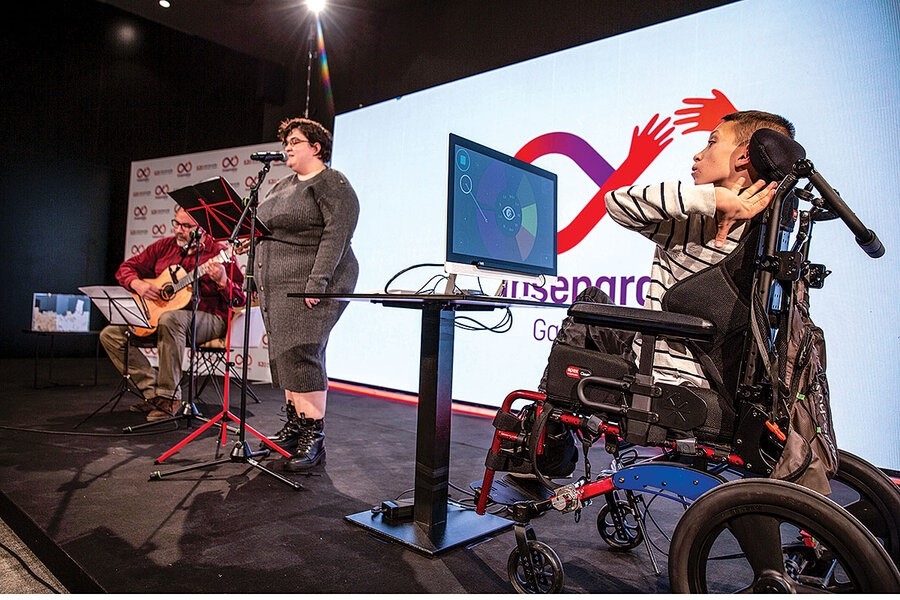 When Joel Bueno informed his parents that he wanted to play music just like his older twin brothers, the couple were crushed. It seemed an impossible wish to grant their vivacious, witty boy. But then they found EyeHarp – a gaze-activated digital instrument that their son, diagnosed with cerebral palsy, could play.

Sitting in a hotel lobby about to go onstage in late November, 14-year-old Joel says the EyeHarp – the name of the instrument as well as the company – brings him joy. But more than that, it enables him to express a range of emotions with others. It allowed him to jam with his guitar-playing brother, Eric, at home, and perform onstage in Madrid and Barcelona.

Zacharias Vamvakousis is the creative force behind EyeHarp. In 2008, he began looking into ways for quadriplegic people to play music when a friend of his had a motorcycle accident that threatened his ability to play the guitar. That scenario did not materialize, but set Dr. Vamvakousis on a path that intertwined his musical passion with his computer science skills. “I realized that the technology was there, but that nobody had done anything about it,” he says.

EyeHarp became a mission. For many people with severe disabilities, expressing basic thoughts and feelings – let alone intentional creative expression – can be a challenge. But Dr. Vamvakousis’ combination of art and technology empowers users to communicate from their soul by translating the smallest movements into musical notes on digital instruments of their choice. 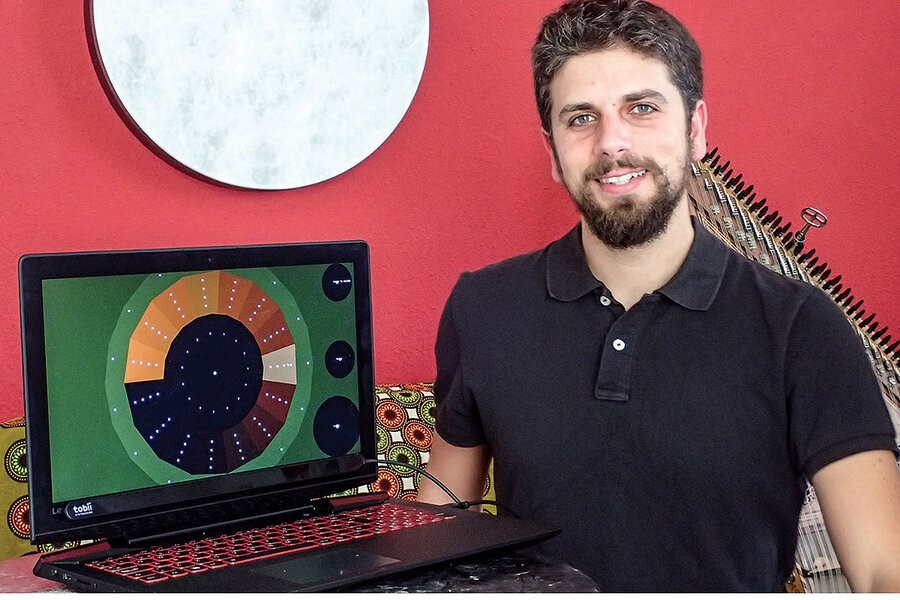 Joel’s movements tend to be jerky and become even more so when he is nervous or excited – such as when his favorite soccer team, FC Barcelona, is about to lose. But when he’s onstage, he calms as his eyes dance across colorful notes on a computer screen releasing a melody in flute.

“The way Joel plays this instrument and flourishes is mind-blowing,” says Tamar Zamora, who sang alongside him, summing up a mood shared by online and in-person spectators. “Seeing him enjoy himself and brimming with happiness on the chair is extraordinary.”

Fine-tuned over countless sessions with Joel and other students, the EyeHarp was the final project of a master’s degree in music technology that Dr. Vamvakousis pursued in Barcelona. This was followed by a Ph.D. in digital musical instruments for people with disabilities. He created the nonprofit EyeHarp Association in 2019, with the goal of making musical expression available to all.

Playing music, he points out, builds social connections and supports self-esteem, while exercising reason and comprehension.

“I wanted to make all this available to anyone,” says Dr. Vamvakousis. Today he splits his time between Barcelona and the Greek city of Heraklion and gives lessons over Zoom to 10 students scattered throughout Spain, Greece, and the Netherlands, all of them coping with impaired movement.

“Zacharias has the folly of an inventor, but he is also a guy with so much soul,” says Jordi Bueno, Joel’s father. “Life has a way of putting great people on your path. The emotion I felt when Joel played the EyeHarp for the first time was tremendous.”

The opportunity for their son to be happy and included is what his mother, Laura, as well as Mr. Bueno value most. Both recall approaching the local music school in Santa Perpètua de Mogoda and being turned away because the school lacked resources to meet Joel’s needs.

Discovering an instrument he could actually play buoyed the whole family, which had long fought for Joel to go to a public school and lead a life similar to his older brothers’.

“We knew certain activities like playing soccer or music would be impossible for Joel,” says Ms. Bueno. “When EyeHarp appeared, we felt, my God, if we can do this we can do anything.”

Now Joel believes the sky is the limit. Physical education is his favorite subject in school – “because it doesn’t require writing” – and he aspires to become a soccer coach. 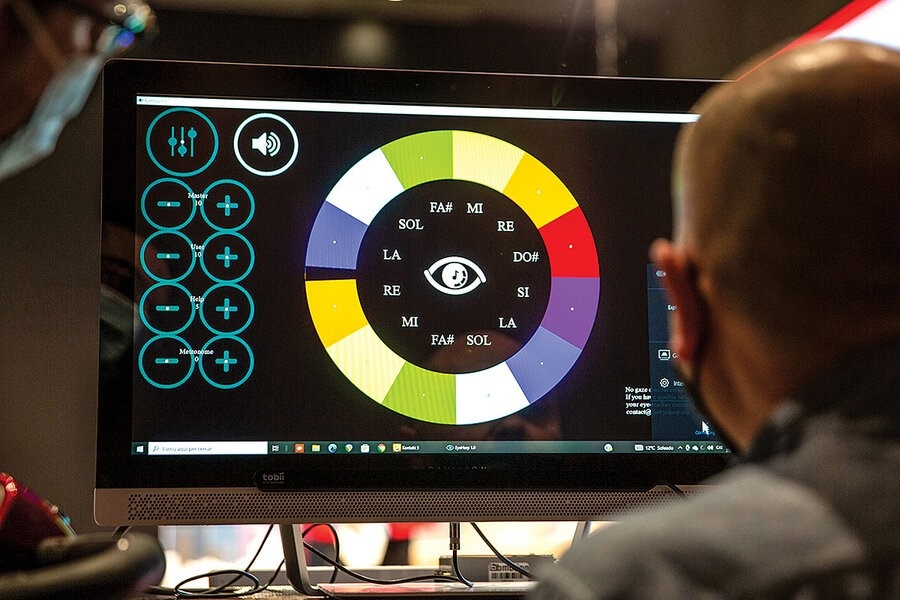 Dominique SoquelJordi Bueno sets up the EyeHarp on a computer at a fundraising event in Barcelona before his son performs.Fine tuning

One technical difficulty that had to be overcome quickly was what Dr. Vamvakousis refers to as the “Midas touch” – a nod to the Greek myth of King Midas, whose touch turned everything to gold, even when unwanted. Initially, thinking of a note often meant looking at, and unintentionally playing, the note. That’s no longer the case.

The EyeHarp is in its fifth version. Notes appear on the screen in a colorblocked wheel that can be customized for pentatonic or heptatonic scales. A button at the heart of the screen automatically repeats the last note played, allowing for greater speed between recurring notes. A circle shifts across the desired notes guiding the gaze to make the right sounds.

As students learn songs by heart, the visual aid can be turned off. Players can practice the notes with or without rhythm. Gamification, accuracy scores, and an option to silence errors offer users several ways to gauge their progress. At the request of a musician in Turkey, Dr. Vamvakousis programmed a vibrato feature for the violin.

Now he’s focused on making the instrument as user-friendly as possible for music teachers and therapists. “Playing music is a process that requires studying and having music classes,” he notes. “So if we want it to reach many people, we have to reach first the music teachers.”

Globally, around 50 million people could benefit from augmented and alternative communication tech, Dr. Vamvakousis estimates. Currently, he says, fewer than 2% are so equipped. So far, around 650 people are using either the basic or premium versions of EyeHarp.

Notes from the heart

Mixalis Mixael is in his late 20s and lives in Limassol, Cyprus. He enjoys soccer and painting. But his greatest passion is music. With the EyeHarp he was able to channel the grief of losing his twin brother, express his romantic feelings to a friend of 11 years, and give a lyrical goodbye to one of the nurses working at the care center where he spends most of his days.

“[It’s] everything,” he types using head movements and eyeglasses with adaptive hardware, a tool he uses to communicate. Discovering EyeHarp was a game changer for him and his music therapist. The first time he tried the software, in May, Mr. Mixael felt a rush of “enthusiasm,” he types. So did Panagiota Kapnisi, his music therapist, who had searched high and low for some way to enable Mr. Mixael to express himself musically.

“At the beginning it was difficult but with the help of Panagiota I found it easy,” writes Mr. Mixael, gearing up to practice the Greek version of “Jingle Bells.” He is learning the song in batches of four notes at a time, using a built in memorization function that breaks down music into manageable chunks. When challenges arise, the duo turn to Mr. Vamvakousis for additional guidance on how to make the most of the software.

Mr. Mixael and Ms. Kapnisi are both full of praise for the device and the man who designed it.

“These are people who are so disabled they don’t have the opportunity to do many things,” notes Ms. Kapnisi, a soprano, who gives voice to the songs of her patient. “Learning music through an application like this gives them happiness. ... It’s their instrument. They couldn’t use an instrument and now they have one. You give them purpose and the opportunity to play music.”

“Zacharias opened new doors for me, and I see life now with different eyes,” says Mr. Mixael. He and Ms. Kapnisi are planning to put on a concert in the coming months.