by Christopher from San Diego

When the world needs a hero, a hero will emerge. A hero will have the ability to help the greater good. A hero will sacrifice his life in order to obtain a goal. Benjamin Franklin was one of these heroes; and helping humanity was his goal.

Benjamin Franklin was well known in the American Colonies for his achievements that created a better future for all. As a printer, scientist, inventor, and a writer, he gave birth to many fascinating works. Born in 1706, Franklin attended school in Boston and then continued his education by teaching himself the fundamentals of the American education. His self-studies led him to ponder about the world around him. As an adult, Franklin was appointed to travel to France in order to propose a treaty or alliance with France. He had the immense responsibility to speak for the American Colonies. Franklin's intellect astonished people around him and made him a hero to many.

While the entire world marveled at Franklin’s accomplishments, few had the privilege to talk with him. George Washington showed his admiration for Benjamin Franklin in a letter that read: "If to be venerated for benevolence, if to be admired for talents, if to be esteemed for patriotism, if to be beloved for philanthropy can gratify the human mind, you must have the pleasing consolation to know that you have not lived in vain" (Waldstreicher). In this letter, George Washington states that Franklin displays heroic traits because of all his honorable actions that led to improving humanity.

During the course of Franklin's life, his talents caused the entire world to marvel at him. The French admired him because they "were charmed by his kindness... [and] his wise... sayings" (Waldstreicher). They saw him as a hero for his talents that came naturally. The ability to say wise and yet witty comebacks to the French leaders fascinated everyone. He also charmed the French with his intellect in helping them stabilize their economy.

Benjamin Franklin was heroic because he was able to give needed advice to a newborn government. Some advice he gave was to create a compromise that "brought a Constitution of the United States into being" (EBSCOhost). As a new country, America needed a written document of its legal beliefs. To the American government, Franklin will always be a hero because of his legal advice that led to a better, non-corrupt government. Using his intellect once again, Franklin improved the American Colonies by establishing and ameliorating the "postal system... [making it] both efficient and profitable" (EBSCOhost) during his reign as postmaster. The postal system was like the methods of communicating today, which include cell phones and e-mail. So, for one person to make the whole system better was astounding.

Benjamin Franklin's ambition to either improve America or die trying will always inspire American citizens. He inspires people to live a better life and help humanity, whether it be donating money for a worthy cause or finding a cure for cancer. One way he tried to improve humanity was "to make Philadelphia a better city... [by] establish[ing] the first subscription library in the American Colonies" (Waldstreicher). Establishing a library helped people become more educated outside of the public schooling. Creating a library that everyone could use made Philadelphia better because then, more and more people could get educated and become better prepared to make important decisions such as who to vote for. More education also lead to increased productivity. One more foundation, founded by Benjamin Franklin, for a better education was "the American Philosophical Society [and an] academy that grew into the University of Philadelphia" (Waldstreicher). In addition to the library, Franklin founded a school that later became a successful university, providing students a chance to study in a familiar surrounding with the support of loved ones, instead of traveling to another school far away from loving support.

Helping to pave a pathway for students to improve society is one way that Benjamin Franklin will be remembered as an inspiration and a hero. Franklin possesses heroic traits because; "as a result of such project[s], Philadelphia became the most advanced city in the 13 colonies" (Waldstreicher). Who else can say that they have made that much of a difference in the way people live?

PBS.org - Benjamin Franklin: An Extraordinary Life. An Electric Mind.
American Philosophical Society - The American Philosophical Society, the oldest learned society in the United States, was founded in 1743 by Benjamin Franklin for the purpose of "promoting useful knowledge."
The Electric Ben Franklin - brings Ben Franklin to a world audience in a colorful, engaging range of presentations, capturing the interests and imaginations of students, and people of all ages and walks of life.
The Papers of Benjamin Franklin - is a collaborative undertaking by a team of scholars at Yale University to collect, edit, and publish the writings and papers of one of America's most remarkable founding fathers. 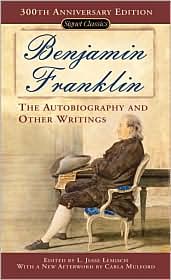 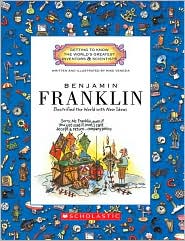 "An investment in knowledge pays the best interest." Benjamin Franklin