Kathy Eldon's work today is greatly inspired by her son, Dan Eldon. Dan Eldon, an artist, poet, humanitarian and photojournalist was stoned to death in Somalia, Africa, in July of 1993 by an angry mob reacting to the United Nations bombing raid on the suspected headquarters of General Aidid. He was twenty-two.

Kathy Eldon spoke about Dan for MY HERO. "I'm a little bit cautious about the word, "hero," because everyone's a hero. We all have that potential. Heroes have a sense of light about them, I think, or should. They make us feel that we can be bigger than we thought we ever could be. I think in a curious way, Dan saw the hero in other people. He saw the qualities that we all maybe have inside us, but we've forgotten about or we don't believe in. Dan saw the magic and the potential in people and I think that's a wonderful quality to have, and to do that at such a young age is really very special."

Dan was allowed to guide his unconventional life with his own light. He was always working to help people, finding new and unusual ways to offer support. One such effort that Kathy described was Dan's co-founding "The Student Transport Aid," dedicated to helping the refugees fleeing Mozambique.

In his journal, Dan stated his objectives for the trip that he and thirteen other young people took across Africa to deliver their aid:

"Team Deziree" Free at Last Voyages, the Search for Clean Water in a Swamp: Mission Statement for Safari as a Way of Life...

To explore the unknown and the familiar, distant and near, and to record in detail with the eyes of a child, any beauty of the flesh or otherwise, horror, irony, traces of utopia or Hell. Select your team with care, but when in doubt, take on new crew and give them a chance. But avoid at all costs fluctuations of sincerity with your best people."

One of the "best people" who joined Dan on his "Team Deziree" trek across Africa was his little sister, Amy Eldon. She was Dan's favorite model, cherished confidante and dearest friend. She was fifteen years old when she accompanied her brother on this adventure.

And Dan's heroes? Kathy explained, "He had many. You'd be hearing a music mix coming from his room and suddenly Martin Luther King, Jr.'s voice: 'I have been to the top of the mountain...' you know. Stunning. Bob Marley was a great hero of Dan's along with Gandhi, Churchill and Ralph Waldo Emerson. (He) specifically (liked) Emerson's Recipe for Success in Life...we found it in his things. Also Dedan Kimathi...who was killed during the Mau Mau Period in Kenya."

The loss of a son, which would have crushed so many, is now giving meaning to many people. One of Kathy's many projects that has been inspired by his life is a feature film. Kathy explained: "I thought it would be exciting to take this model of a life...who was not perfect, he was not a Sunday school teacher ...take that life and be able to show it to younger people and say...Hey, it's possible to be sexy and hip and funky and amazing and also to care about others. To do things that are kind, to be aware of the power that an individual has to affect change in the world. To live passionately, but also compassionately...with awareness of suffering. We want to make a film that is REAL, a true story told with integrity."

When asked what she'd learned from Dan since he passed into spirit world, Kathy said, "I've learned that people can have a profound influence even after they're not physically around. Dan's energy and spirit...he was like a comet...he TOOK OFF -- but the sparks from that comet continue to set fires in people and I think will continue to do so for a very long time. I now believe that energy does remain and that physical death is not a total death. I think our spirits have a life after the physical death....so I've learned a lot."

To earn the appreciation of honest critics
and endure the betrayal of false friends
To appreciate beauty
To find the best in others
To leave the world a bit better
whether by a healthy child,
a garden patch, or a redeemed social condition

To know even one life has breathed easier
because you have lived.
This is to have succeeded.

"The Dan Eldon traveling exhibition is a powerful, affecting tribute to a young artist and his rich, brief life. Containing photographs from Dan’s work in Somalia with the news agency Reuters, large reproductions of his collages, and a variety of art supplies and personal belongings, the exhibit has inspired audiences in six countries."

Dan’s story has become familiar to audiences through two books highlighting his art: The Journey Is the Destination and Dan Eldon: The Art of Life; a documentary by his sister Amy, Dying to Tell the Story; and through various segments about him on National Geographic television, Oprah, CNN, FoxNews, and other national and international media outlets. A major, independent motion picture about Dan’s life is currently in the works.

The Journey Is the Destination: The Journals of Dan Eldon
Dan Eldon, Kathy Eldon (Editor) 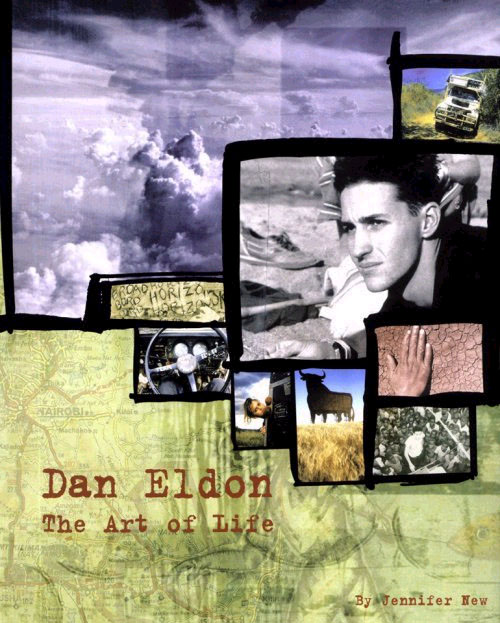 The Art of Life: Dan Eldon in Africa By Charles Tsai (5 Minutes)
This short film about Dan Eldon won first prize in the 2006 MY HERO Film Festival.