by Nina Mariotti from Los Angeles, California in United States

Fought for Ideals of Democracy 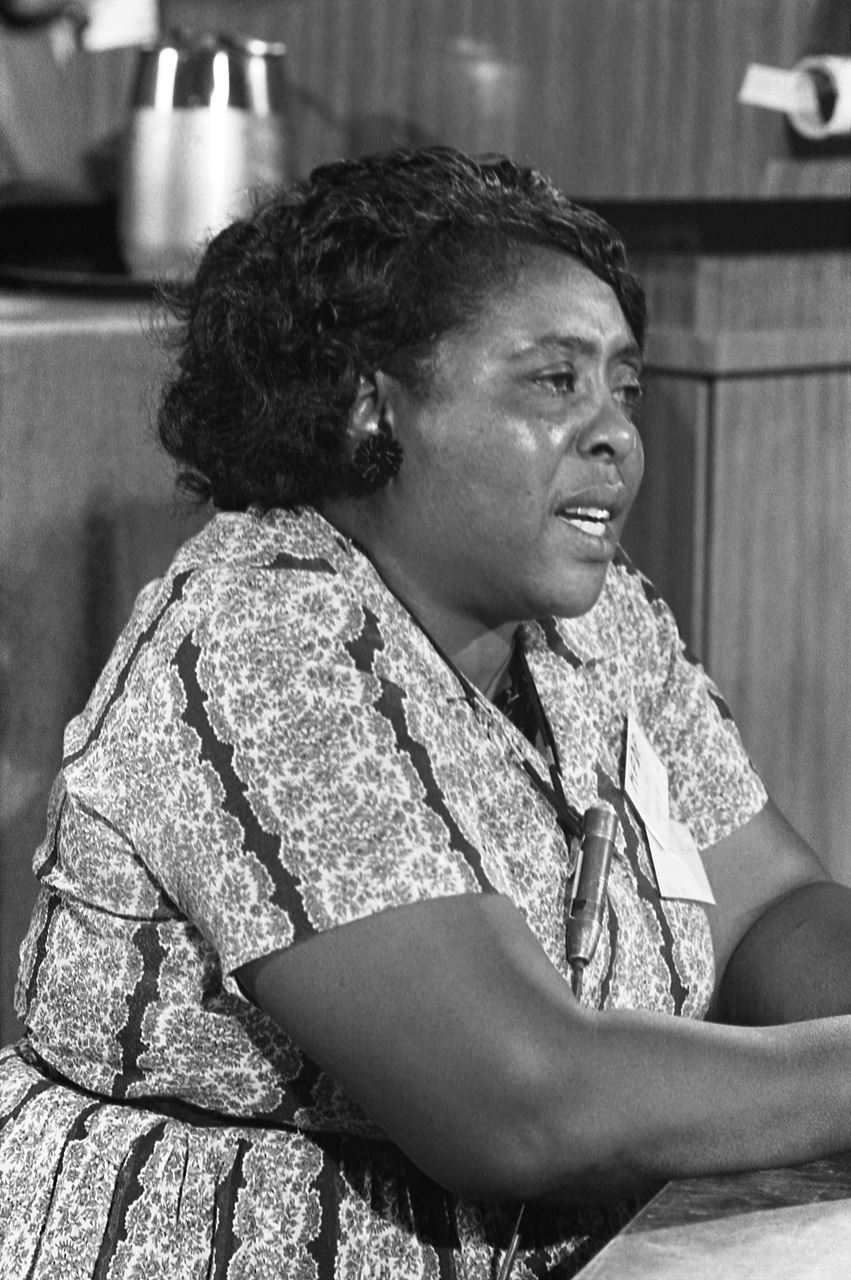 Democracy is a word Americans take pride in. Abraham Lincoln was a true believer that the people, not the government, are ultimately in control of the nation. In 1861, he said, "This country, with all its institutions, belongs to the people who inhabit it. Whenever they shall grow weary of the existing government, they can exercise their constitutional right of amending it, or their revolutionary right to dismember or overthrow it." About ten years later, African Americans were granted the right to vote and finally become a part of this great democracy. Yet, when I fast-forward 100 years, to the Civil Rights era of the 1960's, I can't help but think that Abraham Lincoln would say that society had not lived up to the ideals of democracy. In the Civil Rights era, blacks were still fighting for their most basic rights, including the right to vote. Fannie Lou Hamer, an African American woman from Mississippi, was such a person. By standing up for what she believe in, she not only stood up for herself, and all African Americans, but she stood up for democracy.

With the end of the Civil War on April 9, 1865, African Americans were inspired by the promise and hope of a brighter future. For the first few years of reconstruction, African Americans in the South voted and were even elected into public office. However, the Jim Crow laws, preventing blacks from fully obtaining their rights, slowly spread across the South and African Americans were once again pushed into the shadows. Fannie Lou Hamer, born in 1917, 52 years after the Civil War, did not even know she had the right to vote for many years of her life. She practically lived the life of a slave. As a child, she attended school for about 4 months a year. The rest were spent working in the fields of a plantation. Her schooling stopped when she reached about age 8. Eventually, Fannie became a plantation record keeper in Mississippi, married a fellow plantation worker, and started a family. (2, American RadioWorks) When Fannie was about 42 years old, she attended a mass meeting at her church. The meeting was organized by the Student Nonviolent Coordinating Committee (SNCC). She learned that she could actually have a say in her nation. "They talked about how it was our right, that we could register and vote. They were talking about we could vote out people that we didn’t want in office, we thought that wasn’t right, that we could vote them out. That sounded interesting enough to me that I wanted to try it. I had never heard, until 1962, that black people could register and vote," she said. (1, McMillen) Fannie was one of the first to raise her hand, to volunteer to vote. (3, SNCC Project Group) She wasn’t trying to be brave, and she wasn’t trying to make a statement. Fannie was just doing what she thought she was allowed to do. Unfortunately, things did not go well from there. She was met at the clerk’s office by men with guns. By the time Fannie returned home, the plantation owner told her she and her family could no longer stay there. (1, McMillen)

Lincoln's theory of democracy had many different elements to it. One of the major principals, stated clearly in the 15th amendment of the Constitution, is equality in voting, regardless of race; citizens need equal opportunities to express their preferences about policies and leaders. Hamer had been stripped of that right for almost her whole life. An ideal citizen follows the rules of democracy. That is all that she had been trying to do. When asked why she wasn't afraid to register to vote, Hamer said, "The only thing they could do to me was to kill me, and it seemed like they'd been trying to do that a little bit at a time ever since I could remember." (3, SNCC Project Group) Another major principal in democracy is human rights and equality of all persons. Everyone is entitled to the same treatment in society, and no group is supposed to be singled out because of who they are.

Fannie Lou Hamer did not just help people register to vote. The SNCC formed the Mississippi Freedom Democracy Party (MFDP). The MFDP was fully supportive of Fannie, and with them behind her, she ran for congress in 1964. Hamer stood in front of the Democratic National Convention in Atlantic City as a strong woman. She bravely told her story of her attempt, and fail, to register to vote. She told the story of African Americans who, too, were denied their voting rights. Her speech was clear and straightforward. Despite President Johnson’s efforts to hide the work of the MFDP, Hamer’s speech was broadcast on major networks. (2, American RadioWorks) Hamer’s voice was finally being heard. Because she was so persuasive, two other MFDP delegates were given speaking rights at the convention, and others were seated as honorable guests. (3, SNCC Project Group) Four years later, Fannie was receiving a standing ovation when she was seated as a delegate. (2, American RadioWorks)

An ideal citizen does not just accept things because that is the way they are. They look at it in a different perspective and stand up for what they truly believe is best for the nation. Fannie Lou Hamer was expressing her individual freedom, and was not interfering with other’s rights in the process. She questioned the America she lived in. In the famous speech she gave at the MFDP convention, Hamer said, “All of this is on account of we want to register, to become first-class citizens. And if the Freedom Democratic Party is not seated now, I question America. Is this America, the land of the free and the home of the brave, where we have to sleep with our telephones off the hooks because our lives be threatened daily, because we want to live as decent human beings, in America?” (4, American Rhetoric) Hamer fought for her right to be part of America’s famous democracy. She fought for equality in voting, human and minority rights, and for her individual freedom. It’s safe to say that Abraham Lincoln would be proud of what Fannie Lou Hamer did for our nation.