Women's History Month is celebrated each March in the United States as a way to "amplify women's voices to honor the past, inform the present and inspire the future."

The following program of short films celebrate women trailblazers and show the kinds of obstacles these women faced, as well as common threads between their stories. We celebrate the empowerment of women across many cultures!

Produced by:Jeanne Meyers
A life dedicated to philanthropy, activism and mentorship, Eva Haller makes a positive impact around the world.

Samar Minallah Khan
On the outskirts of Islamabad, a committed coach teaches a team of unlikely players, their families, and a community how playing Cricket can change lives.

Joan Ganz Cooney: The Unsung Hero Who Led Us All To Sesame Street

Laura P. Valtorta
Ginger Westray, a retired school teacher, uses her entire house as a canvas for her painting and sculpture.

Small Planet Institute
Celebrating the 50th anniversary of the Book Diet for a Small Planet.

Kitty Richardson
Congratulations to Yasmine Sherif, the Director of Education Cannot Wait and the winner of the 2020 Global Educator Award.

“Power expands the moment it’s shared. And women often want to do that. When they're invested, they want to give back, they want to pay it forward. And that’s what we do at Vital Voices. We simply search the world for these leaders with a vision for extraordinary change. And we invest in them to take that vision to scale.”

Cari Beauchamp is an award-winning author, film historian and documentary filmmaker. In her book about the nearly lost history of the powerful women writers of early Hollywood, Without Lying Down, she resurrects the figure of Frances Marion, who reigned as the highest paid screenwriter or two decades. With the book nearing its 20th anniversary, we talk to Cari about how she rescued Frances Marion "from the footnotes of history."

Angelina Pendleton-Mendez interviews Maria Mendez, her paternal grandmother, about her family and their journey.

Looking After Our Spirit

Jasmine Blossom Martoglio | Batchelor Middle School
This is a documentary about Katherine Johnson and why she is an American hero.
On March 8, 1911, the world celebrated the first-ever International Women's Day. It was part of the women's suffrage movement, which was in full swing in European and North American countries: Women wanted to vote, and they wanted to have the same rights as men. In 1986, national Women's History Month was declared in the US.

A brief look at the journey towards Equity for Women and the Women's Suffragette Movement directed and narrated by MY HERO intern Kitty Richardson.

These stories highlight female heroes who took on pioneering roles in the distant and recent past. Their long-lasting contributions to America push the country forward and open doors for the women who come after.

By: Arya K
Famous for being the first South-Asian and second African American California senator, Kamala Harris is known for being unwavering in the face of opposition.

By: Deborah Neff
Afghan filmmaker Sahraa Karimi speaks out about the future of Afghan cinema and the rights of girls and women as the Taliban takes over the country in August 2021.

By: Abigail Richardson
Samar is a filmmaker, anthropologist and activist. In the media, she has been referred to as ‘The Savior of Souls,’ one of the ‘Women who rock the world,’ ‘The Crusader with the Camera’ and the ‘Women that changed Pakistan.’

By: Deborah Neff, MY HERO Staff writer
The Art House is about Ginger Westray's house, painted in copper colors from head to foot.

Michelle Obama has recently made history as the first African American to become the First Lady of the United States.

By: Cara McPhie
Harriet Tubman was a slave known for creating the "Underground Railroad" network, leading 300 slaves, including herself, to freedom.

By: Deborah Neff
Pashtana Durrani, who received the Malala Fund Education Champion award for her work on behalf of education for Afghan girls, is determined to continue providing educational opportunities for women and girls, even if she has to resist the Taliban and go underground.

By: Betty Bailey
Melinda Gates' women heroes in Africa and India teach her how to uplift the women in their communities through the Bill & Melinda Gates Foundation.

By: Victoria Davis
Hero Elizabeth Blackwell was the first woman in the United States to receive a degree as a doctor, and started a women's medical college for women.

By: Nashua Haque
First Lady Abigail Adams effectively led the country while President John Adams was an envoy in France, through detailed letters between the two and her own business savvy.

Elizebeth Friedman is known as "America's first female cryptanalyist" for her work deciphering codes between Nazi forces during WWII.

The following stories have a link so you can hear the audio as you read. Great for ESL students, visually impaired or blind students.

By: Yajahira from Las Vegas

Height was a civil rights/women's rights activist and an ally to the LGBTQ+ community.

By: Kyra from Ankara, Turkey

Her story was hidden for decades: Katherine Johnson plotted multiple flight courses for NASA, including the Apollo 11 spacecraft, the first spaceship to reach the moon.

Bessie Coleman wanted to become an aviator. Rejected from every U.S. aviation school for being a woman and black, she refused to take no for an answer.

Margaret Chung aka "Mike" aka "Mom Chung of the Fair Haired Bastards," was the only woman in her med school class. She advanced women's ability to serve in the armed forces.

A late bloomer, botanist Ynes Mexia enrolled in college at the age of 51. She led expeditions, including in the Amazon rainforest, discovering 500 new species of plants.

UNLADYLIKE2020 series was selected as the winner of the 2020 Eva Haller Women Transforming Media Award, offered each year as part of the MY HERO International Film Festival to recognize outstanding documentary shorts featuring women.

"Sally Ride is considered a hero because she has done amazing things, like when she went on the STS-7 mission in 1983."

By: Libby Huxley
An elementary student talks about her hero, women's suffragist Susan B. Anthony.

Painted by Amy Sherald, this portrait of the first African-American First Lady Michelle Obama has been exhibited at the Smithsonian's National Portrait Gallery since 2018.

Marilyn Huerta's portrait of Bessie Coleman, who grew up during the time of segregation and was the first black woman to fly around the world.

Instituted by Rep. Bella Abzug and first established in 1971, the date commemorates the passage of the 19th Amendment, the Woman Suffrage Amendment to the U.S. Constitution, which gave U.S. women full voting rights in 1920.

By: Kitty Richardson
Eva's Salons bring together artists, scientists and media makers from around the globe. Eva is a 91 year old activist, philanthropist holocaust survivor. The Eva Haller Salon's take place virtually every Saturday at 2:00 PM PST. To request an invitation to attend the Salon Series please email [email protected] 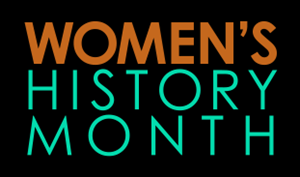