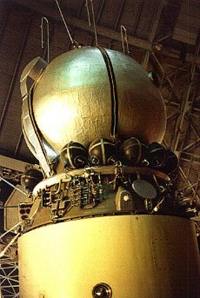 On April 12th, 1961, the Soviet Union reported the successful launch and orbit of the first man into space, Major Yuri Gagarin. People around the world went wild over Gagarin's accomplishment and the Soviet Union's technological achievement.

Yuri Gagarin immediately went on tours and parades around the world. He went on to become one of the world's greatest heroes, with Air Force academies, museums, statues and streets named after him, along with other accolades.

But Sergei Vladimir Ilyushin, Jr., a Soviet pilot, was one of the few people who knew for certain that Yuri Gagarin was not the first man in space. After the Soviet Union launched Sputnik, the first satellite, into orbit, both the U.S.S.R. and U.S. saw space as a way to compete. Due to poor relations between the superpowers, the Soviet government was reluctant to publicize stories about failed space travel experiments, and so it gave as little attention as possible to the story of Sergei Vladimir Ilyushin, Jr., who made it into space five days before Gagarin.

One of the most popular and experienced test pilots with dozens of speed and altitude records to his credit, Sergei Ilyushin was the Russian equivalent of America's Chuck Yeager (the U.S. Air Force pilot who first broke the sound barrier). He was a born risk-taker and the best hot-shot pilot around. His father was a designer and builder of WWII fighter and bomber planes, a deputy leader within the government, and also great friends with Kruschev, who was then the country's leader. Ilyushin, Jr. was a natural choice for the space program.

At first, young Ilyushin snubbed the idea of flying in space; since the flight would be completely controlled from the ground, he saw no challenge in it and considered it fit for "dogs and lab rats." But he changed his mind and soon was placed in a special space training course.

On April 7th, 1961, five days before Gagarin's successful flight, Ilyushin was launched into orbit. There had been no publicity about the launch. After three orbits, Ilyushin lost contact with the mission control engineers on the ground. During reentry, when he was supposed to eject from the capsule and parachute to safety, Ilyushin was unable to eject (he had lost consciousness at some point during the flight) and made a "hard landing" in the capsule. Ilyushin survived, but was injured.

Although the U.S.S.R. did not publicize the flight, Western reporters caught wind of the flight and the condition of Ilyushin, and reported the event all around the world. But, since the flight had been so unsuccessful, the Soviet leaders did not see Ilyushin as a good way to promote their space program. They refused to respond to Western stories about Ilyushin's flight. They even claimed that the pilot was in the hospital in Moscow as the result of a car accident and not a failed flight. Later, they shipped Ilyushin off to China where he stayed in a rehabilitation hospital for over a year.

Five days after Ilyushin's flight, Gagarin was launched into orbit, and only after his safe return, did the Soviets release film footage of the event. While Sergei Ilyushin was in the hospital, the government was sending Gagarin out into the world as the first man in space. Only recently have the top secret state archives in the Kremlin been opened up to the world, revealing Ilyushin's space mission.

In 1999, Ilyushin was living in a modest apartment in Moscow with his wife of over 45 years, still active as a test pilot, aircraft designer and spokesperson for a major military aircraft manufacturer.

A note from Jeanne Meyers, producer of the MY HERO Web site:

We cannot always verify stories submitted to MY HERO. Due to the personal nature of each entry, authors' opinions are not edited. We have not been able to confirm this story. While we cannot be certain this story is true, we feel that Paul Tsarinsky has written a very powerful story about his hero.

We are attempting to find more facts about these historic events. If anyone has more information please e-mail [email protected]

The MY HERO staff encourages visitors to read additional information we've received on this story. We urge you to read the FEEDBACK and add your comments or information to this controversial story.

"...I interned for Eliot Haimoff..., a professional researcher/reporter who produced many shows for PBS and other networks. During my internship, my job was to translate articles from Russian to English. Thus, I learned about the story of Ilyushin. I assure you that the whole story is true... Not long ago, he [Eliot Haimoff] went to Russia to interview Ilyushin. Upon his return, he made a documentary/show about him. He told me that most of the articles are found in the Kremlin archives, which were opened up to American reporters in the 1990's."