As individuals, we are defined by the principles that guide us. Those principals, or ideals, shine through in the personal heroes we choose. Sometimes, our heroes are those global giants whose work appears on the silver screen. Other times, the true hero's work is done subtly and quietly, behind the scenes in our own neighborhoods. Our most effective heroes are those who share their time and talent both locally and globally, like Laguna Beach heroes Greg and Barbara MacGillivray.

The MacGillivrays met as teenagers, when fate paired them as lab partners at Newport Harbor High School. Their story spans 5 decades and includes 2 children, years of selfless service to the Laguna Beach community and a new, multimillion-dollar campaign to restore and preserve the world's oceans.

The MacGillivrays love of the ocean has been a constant in their lives. During his teen years, doctors discovered Greg had a rare disease in the lining of his elbow joints that would keep him off the football and baseball fields and steer him toward less aggressive ocean sports. Medical professionals were trying to prevent further injury but, in the process, they unleashed a passion for the sea that MacGillivray and his wife would eventually share with the world. Greg became an avid surfer and videographer. He aimed his camera lens toward the water and has become one of the most successful documentarians of all time and a master of the large screen IMAX format.

In the 1960s, MacGillivray met his future business partner Jim Freeman while making documentaries of the Southern California surf culture. Their passion for cinematography quickly set them apart from the crowd. Soon, MacGillivray-Freeman Films became known for its bold technical innovation and ability to capture breathtaking images of nature. Sadly, just days before the premiere of their Smithsonian-backed film To Fly!, Freeman lost his life in a helicopter accident. (In honor of his friend's memory, MacGillivray continues to keep the company name.) The film, which brings the experience of flight to a larger-than-life screen, is still seen in the Smithsonian's National Air and Space Museum, making it the longest running documentary film to ever play in one theater.

The film was the first in a string of big-screen successes for MacGillivray-Freeman Films. The company earned two Academy Award nominations, for The Living Sea(1995) and Dolphins(2000). MacGillivray-Freeman Films is responsible for the technical advances that spawned the IMAX film format. The company has produced 9 of the top 20 most successful large format films including Everest(1998), which remains the top grossing giant screen film of all time. MacGillivray has personally shot more than 2 million feet of 70mm film, more than anyone in history.

Barbara and Greg MacGillivray's support for the world extends to their Laguna Beach community. They are supporters of the Laguna Friendship Shelter, an organization that offers a self-sufficiency program to homeless people in Orange County. They have helped support the foundation responsible for the Orange County Great Park, a former marine base, which will provide six square miles of parkland and open space for recreation and educational uses.

Earlier this year, the MacGillivrays hosted a local screening of the documentary "Coral Reef Adventure" to raise funds and awareness for Laguna's Pacific Marine Mammal Center. The center is a non-profit organization dedicated to the rescue, rehabilitation and release of marine mammals that become stranded on the beaches of Orange County. Animals at the center are treated for various medical conditions, including dehydration and malnutrition, and classes are offered to the pubic to help educate the community.

Together they have traveled the globe to document some of the most extraordinary views of the planet and its living beauty. Arabia, Everest, The Grand Canyon and recently their team took to the Arctic. Their latest 3D film To the Arctic follows a mother polar bear and her two 7-month-old cubs as she struggles to find food for her family and defend the cubs from predators. 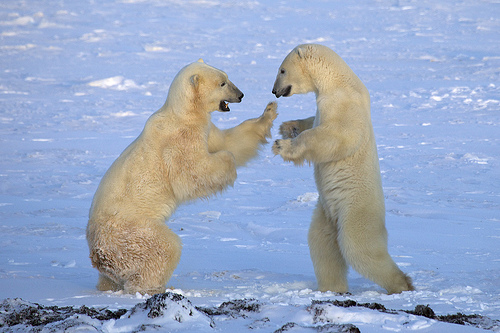 As a family, the MacGillivrays work to promote education among children and adults about critical environmental issues in hopes of inspiring action and finding solutions. Their non-profit organization MacGillivray Freeman Films Educational Foundation produces teachers' guides and companion books to supplement their films and to encourage students to become aware of their environment. The foundation sponsors tours of notable scientists and speakers to help gain knowledge and educate people about conservation issues.

Now, MacGillivray Freeman Films has launched the world's largest media campaign to support and raise awareness of our oceans. One World One Ocean is a $45-million endeavor that will include a 3D IMAX film, a 3D theatrical documentary, a 3D television series and a global social action campaign. Filmmakers will travel to more than 40 locations around the world, using state-of-the-art 3-D cameras to capture never-before-seen images of the Earth's oceans. The goal of this campaign is twofold; to illuminate the beauty of the seas and to show the toll that man-made pollution is taking on the ocean environment.

Greg and Barbara's son Shaun, an accomplished filmmaker in his own right, is co-producer of the One World One Ocean campaign. Shaun won a first place award in the 2007 MY HERO Short Film Festival for his college film "Joey," a touching story about a 12-year-old boy whose courage, under dire circumstances, inspired those around him.

Meghan MacGillivray, their daughter, is involved in the productions and educational outreach. Three years ago, she joined her father on a Colorado River expedition with Robert Kennedy Jr. and his daughter. The journey documents the effect of man on this precious resource and is being viewed by millions in the IMAX 3D Film called The Grand Canyon Adventure.

The entire MacGillivray family has given its energy, time and resources to protect local and global environmental resources. The campaign ONE WORLD ONE OCEAN will focus on problem areas around the world and promote knowledge about sustainable systems. The oceans provide up to 70% of the oxygen we breathe. They also supply our top source of protein. However, non-sustainable fishing practices and pollution are putting our oceans at risk. According to marine scientists, overfishing has wiped out 90% of the world's big fish, including swordfish, blue fin tuna, sharks, Chilean sea bass and orange roughy. Nitrogen pollution and fertilizer run-off have created hundreds of "dead zones," places in the ocean that don't have enough oxygen to sustain marine life.

One World One Ocean hopes to help restore a balance that will last for centuries. The foundation also hopes to set aside protected areas, following the example of national parks. Right now, only about 1% of the world's oceans are protected. The One World One Ocean Foundation wants to see that number grow to at least 10% in the next 10 years, by setting up national and international sanctuaries for marine life. The foundation will also sponsor conservation projects that promote sustainable methods of harvesting sea life.

The MacGillivrays have traveled from Arabia to the Arctic, making spectacular films that take viewers on amazing adventures to lands they may not otherwise see. Their environmental stewardship and commitment, both globally and locally have earned the MacGillivrays the 2011 Community Award at the Laguna Hero Festival, an annual celebration of Laguna Beach heroes that is produced by The MY HERO Project.

One World Ocean - is a global non-profit campaign designed to emotionally connect people to the world's ocean
MacGillivray Freeman Films Foundations - funds and produces educational giant screen films and companion educational programming focusing on science, the environment, world culture and natural heritage locations.
MacGillivray Freeman Films - produces giant screen films that teach, inspire and amaze.
Joey - MY HERO film by Shaun MacGillivray -
Joey is an inspiration to us all with his great attitude in the face of challenging circumstances.

Arabia: In Search of the Golden Ages
Michael Hamilton Morgan

Click here to listen to the MacGillivray Family story