by Emily from Westerville

Suzanne Farrell was born on August 16, 1945 in Cincinnati, Ohio. She was the youngest member of her family. Her real name was Robeta Sue Ficker. Someone mentioned to her later she should change it because they thought it was not fit for her.

Suzanne’s family’s last name is Ficker. Her Father’s name is Robert, and her Mother’s name is Donna. Suzanne’s sisters’ names are Beverly and Donna. Donna’s nickname was Sug, short for Sugar. Suzanne’s Mother wanted the girls to have dance training but the Father thought that it was just a waste of money.

In school, Suzanne Farrell loved anything challenging, like spelling bees and tests. She had a hard time keeping still and concentrating. When her two sisters went to dance, Suzanne came along but didn’t participate in the classes. She was fidgeting at that time. Then a dance teacher came and suggested Suzanne should join one of the classes and try dancing. She said it would probably take away the fidgetiness. She began a dancing class, and yes, she stopped bouncing.

When she was little, she had long legs, which she didn’t know were just right for ballet. She thought you could do nothing special with them. When she was an elementary kid she was a tomboy. She didn’t like to dance, especially ballet.

When Suzanne was a child she had heroes. They were Marilyn Monroe who was an American actress, singer, and model and Martha Raye who was a American comic actress and singer. Suzanne sometimes tried imitating them, usually in the kitchen or living room. If someone saw her, she would run away embarrassed. She imitated them because she thought they were fashionable and cool.

When Suzanne Farrell married, she had no children. She married Paul Mejia in 1969. George Balanchine thought he had her after he had set Suzanne in lots of roles in plays.

During the 1960s, two white Public schools in New Orleans opened to blacks for the first time. Also, John F. Kennedy and Nixon met in the first televised Presidential debate. Kennedy won the debate and became the president for some of 1960. Against this backdrop, Suzanne Farrell’s early career began at NYCB or New York City Ballet. That is also where Suzanne met Paul Mejia and married. The first roles that were just for her were in 1963.

It all happened when Suzanne, her sister, and their mother went to New York to do more dance training. Their mother saw if they become pros they would have to come to New York, and of course, as you know, she became famous. She lived to learn from a little mistake, big or small.

Suzanne Farrell’s accomplishments were the National Medal of Arts Award in 2003. She also got the Golden Plate Award in late June 1987. In 2005 she earned the Capezio Dance Award. 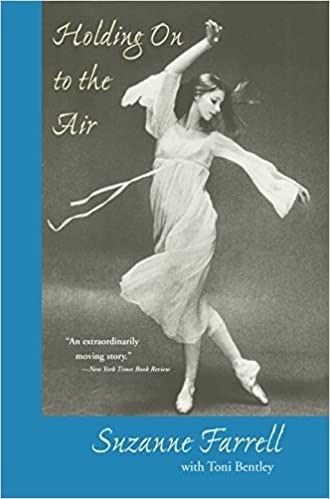 Holding On to the Air: An Autobiography
Suzanne Farrell
Related pages