Maria Tallchief was the first American prima ballerina and the first Native American with that distinction. She was inducted into the National Women's Hall of Fame and received the Kennedy Center Honors in 1996. 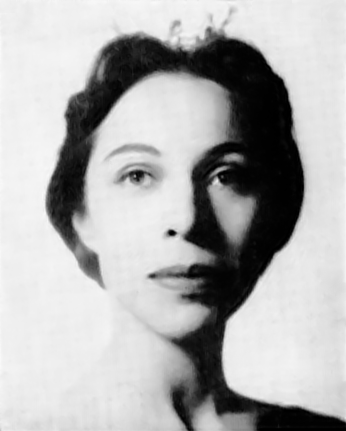 Maria TallchiefDance Magazine April 1961 [Public Domain] via Wikimedia CommonsBetty Marie Tallchief was born in Oklahoma on January 24, 1925. Her mother Ruth was an independent woman of Scottish-Irish background. Maria’s handsome father, 6-foot, 2-inch-tall Alexander Joseph Tallchief was Osage Indian. During his youth, his family never lacked for money. Times were not always easy though. There was a time when the Osage tribe was vulnerable to a few predatory white citizens who tried to take the land through devious and violent means. During the Osage Indian murders, Maria’s cousin Pearl barely escaped with her life; Pearl's entire family was killed.

Maria says that she was a shy girl and a good student: “In many ways I was a typical Indian girl, shy, docile, introverted. I loved being outdoors and spent most of my time wandering around my big front yard, where there was an old swing and a garden. I’d also ramble around the grounds of our summer cottage hunting for arrow heads in the grass. Finding one made me shiver with excitement. Mostly I longed to be in the pasture, running around where the horses were" (Maria Tallchief: America's Prima Ballerina: By Maria Tallchief, Larry Kaplan).

Maria’s mother recognized Maria’s musical gifts from an early age and sent her to practice the piano at age three. When her sister Marjorie was old enough, Mother Ruth began to dream of her girls becoming musical film stars. The girls learned a rich background of dance - part vaudeville, part ballet - from a woman in town, until Ruth decided that the little nowhere town of Fairfax, OK, was too small for her talented girls.

The amount of the oil checks had been dwindling over the years, and this was another incentive to try their luck elsewhere. The family picked up and moved to Southern California. As good fortune would have it, Ruth and her girls, new in town, made an important contact while they were enjoying hamburgers and soda in a drug store - this while Alexander was filling the car at the gas station nearby. Ruth asked a significant question of the druggist: Did he know of a good dancing school in the area? Earnest Belcher’s was the answer.

This was to be a decisive first step in Maria’s career. The family settled nearby. At Belcher’s, the sisters learned ballet, tap, acrobatics and Spanish dancing. Maria even became expert with the castanets. She said, “Mr. Belcher understood however that it was not character dancing technique dancing Marjorie and I lacked.  A character dancer performs national or folk dancers such as mazurkas or polkas, which are not performed on pointe. My sister and I were deficient in the basics of ballet technique. Our training shocked him. ‘Your daughters have been put en pointe way, way too early, Mrs. Tallchief. It’s a miracle they haven’t injured themselves.' He insisted we go back to the beginning" (Maria Tallchief: America's Prima Ballerina).

Maria and her sister were enrolled at Beverly Vista School. It was here that she first felt discrimination because of her heritage. She said some of the students made fun of her last name, pretending they didn’t understand if it was Tall or Chief. “A few made war whoops whenever they saw me and asked why I didn’t wear feathers or if my father took scalps. After a while they became accustomed to me but the experience was painful. Eventually I turned the spelling of my last name into one word. Everything in school was in strict alphabetical order and I wanted to avoid confusion" (Kaplan).

When Maria was twelve, her mother found a respected ballet teacher for her daughters. Maria’s thorough training from Mr. Belcher made her an apt pupil for Bronislava Nijinska. Not only was she respected but she was the sister of Vaslav Nijinsky, and, like her brother, she was a graduate of the Imperial Theater School in St. Petersburg, Russia. From Nijinska, Maria learned what it would take to become a dedicated ballerina.

“Even though she wasn’t verbal, Nijinska knew how to get her point across, she communicated with a firm tap on the shoulder. Her husband, Nicolas, sometimes translated but his English wasn’t much better than hers. 'Madame say you look like spaghetti’, he’d explain, and the message was understood." He’d also expound her philosophy: "'Madame say when you sleep, sleep like ballerina. Even on street, waiting for bus, stand like ballerina.' So we didn’t concentrate only for an hour and a half a day on what was being taught, we lived it." As Maria would say, “Two strong women, my mother and my teacher, were directing my destiny and I loved them both" (Kaplan).

From here on momentous opportunities came her way as she studied and performed with the best. Maria Tallchief, a shy young Native American from the little town of Fairfax, Oklahoma, became a prima ballerina, a star of the Ballet Russe, a world traveler and even the wife of one of the most prominent Russian choreographers of all time, George Balanchine.

While travelling across Oklahoma by train to join Maria, Balanchine is said to have pointed out an Indian reservation and exclaimed enthusiastically to his Russian friend, “Look! Those are my new relatives!” And for the next few hours, he recounted Indian lore, speaking in Russian (In Balanchine’s Company: A Dancer’s Memoir by Barbara Fisher).

Maria would go on to be one of his greatest admirers and supporters. Even though their marriage didn’t last, Maria was the first to dance the role of the Sugar Plum Fairy in the choreographed version of the Nutcracker Ballet created by Balanchine. She was the pioneer of many roles created by her genius husband. She saddened ballet fans everywhere when she retired in 1965.

Maria had her heroes, too. She never forgot those who inspired her and she took up the cause of inspiring and helping other young dancers to reach their fulfillment. She had a wonderful balance of talent, passion, humility and her own unique spirit that you find in our best artist legends. They love their art, they learn from the best and they remain true to their own inner being.

Maria felt that her mother and her teacher, Nijinska, led her to her destiny, but her passion and her drive were already there. It was there in her devotion to her art, not to money, nor to fame. It was her choice to learn from the best and to find her own inner spirit in the dance that inspired her, to live as a ballerina. This inspiring dedication can be applied to any passion in life: a calling in science or religion, teaching or community work and, of course, the arts.